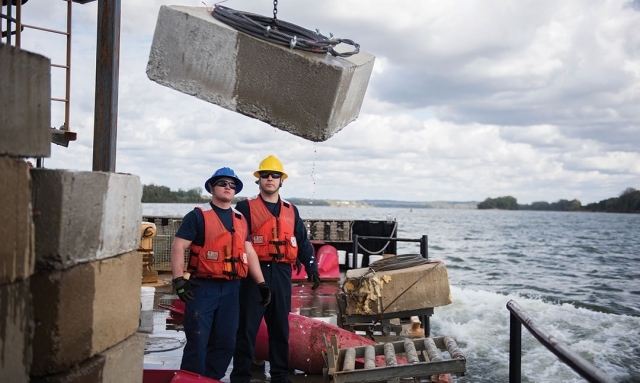 It’s late October, and the Coast Guard cutter Obion is a couple of hours into a 10-day trip up the Ohio River, pulling and setting buoys.

The work can be dangerous, threatening to send a careless sailor home short a finger or a toe. A 4th-class buoy weighs 465 pounds, and a 6th-class buoy is 170 pounds. Each is attached to a 1,500-pound anchor stone.

Obion’s deck crew watches for fouled mooring, too – often a sinker or a sunken buoy wrapped in another sinker’s wire or chain. A “live load” could shock the crane and end in a sudden release that sends everyone diving for corners. Tree trunks, shopping carts, refrigerators – they’ve seen crazy stuff.

“Sometimes you pull something up and kind of chuckle,” says Senior Chief Boatswain’s Mate Cameron Morgan, Obion’s officer in charge. “You just sit there and look at it: ‘How are we going to do this and not hurt anybody?’ You’re laughing about it, but it could kill you.”

It’s all part of the mission: marking America’s inland waterways, to ensure safe and independent navigation for commercial and recreational traffic.

Obion is one of 18 river tenders scattered throughout the Western Rivers System, in places like Greenville, Miss., Omaha, Neb., Sewickley, Pa., and even Sallisaw, Okla. They service and maintain up to 15,000 buoys (called floating aids to navigation), along with thousands of shoreside (fixed) aids, in some of the Coast Guard’s most remote operating environments. Because of these vessels and their crews, the nation’s inland waterways are able to move some 630 million tons of cargo annually. That’s nearly $4.5 trillion in economic activity.

“We work in prevention,” Morgan says. “We’re preventing marine tragedies and loss of life right now, this minute. It’s just hard to quantify. That megatanker didn’t strike a rock and create an environmental disaster. Why don’t you know about it? Because it never happened. Why? Because we’re doing our job.”

The 65-foot cutter operates out of Owensboro, Ky., where few would expect to find a Coast Guard presence. Even people in the Coast Guard are surprised. “When I was told I was coming here, I was like, ‘I’m going where?’” says Seaman Trevor Stotts. “It’s a good crew. We work hard, but we like to play hard, too.”

The unit has 16 cuttermen, so with Obion having only 13 racks, a few are staying back this time out. The youngest man on board is 19, the oldest 42. For most, this ship is their first aids-to-navigation (AtoN) assignment – on rivers, at least.

“It’s a different world,” says Boatswain’s Mate 1st Class Matt Degnon, Obion’s second in command. “We’re constantly working as we transit, so the guys are pretty well beat at the end of the day.”

In addition to buoy tending, they climb steep and slippery river banks to cut vegetation around fixed aids, build and inspect towers, and make sure lights are flashing as advertised. Everyday challenges include heat, humidity, mud, storms, hornet nests, bee stings, and poisonous plants like ivy, oak and sumac – all while working dozens of miles from the nearest boat launch or town.

As executive officer, Degnon monitors crew endurance and fatigue. He came to Obion from Ketchikan, Alaska, a year and a half ago, with experience in the Coast Guard’s more visible activities: law enforcement, search and rescue, drug interdiction. Adding “AtoN afloat” to his skill set makes him part of a small community, and highly sought after.

He wanted to join the military after high school and took his parents’ suggestion to try the Coast Guard. Where the other services train until they deploy, the Coast Guard operates every day, Degnon says. “We’re deployed now, if you will. We’re doing our primary mission regularly. On a river tender, we’re gone probably one week of the month, depending on the season.

“I just wanted to do something different. Some people go off to college or into a trade, and they work their 9 to 5 or whatever, same thing week in and week out. Here it’s not, and I think that’s what I thrive on: adaptability and change.”

Morgan is newer to Obion, though with plenty of experience in buoy tending and fixed aids. After assignments in Maine and Washington state, he served as executive petty officer for three years on Smilax – the Queen of the Fleet and, at 73, the nation’s oldest operational ship.

There, he worked more than 1,200 fixed aids in the narrow passages of the Atlantic Intracoastal Waterway, as well as floating aids in the inlets of North Carolina’s Outer Banks.

Obion is Morgan’s first ship as officer in charge, and he’s focused on the professional development of his crew – creating an environment where they can perform their jobs to the best of their ability.

“It’s cool to finally have control of that,” he says. “Everything I say and do affects the tone and atmosphere of the command. You see it on the guys’ faces every day, so I’m careful how I come in. Honestly, I love it. I really do.”

AGING FLEET Unless they live along a river, most Americans don’t know the Coast Guard conducts this particular mission, says Capt. Paul Dittman, director of Western Rivers and Waterway Management for the 8th Coast Guard District in New Orleans.

Think about it: massive quantities of agricultural products are harvested in America’s heartland, then transported downriver to be loaded onto ships heading for Europe, Asia and the Middle East. With rivers being dynamic forces of nature – rising and falling and shoaling – somebody’s got to mark the safest route.

“What a lot of folks don’t realize is that buoys set up by our cutters in places like Dubuque, Iowa, directly facilitate the transportation of cargo overseas,” Dittman says. “You have to look at it as an entire system, and these inland cutters are critical components to maintaining that system.”

“We’re at a point now where these vessels have certainly exceeded their intended life expectancy,” Dittman says. “They’re becoming more and more challenging to maintain.”

Not only do the inland cutters require constant upkeep, but most were built when use of lead paint and asbestos was commonplace, adding a health and safety risk. Between 2007 and 2016, the Coast Guard recapitalized much of the inland fleet’s engineering systems as a temporary fix, and its 2018 budget proposed $1.1 million to start the process of designing a newer, more capable vessel. Still, production is at least a decade away.

“I think what we would see as a replacement would be similar,” Dittman says. “These are really construction tenders. I don’t want to say they’re necessarily low-tech, but they’re not Aegis cruisers. They’re designed to build things and to put things in the water.”

Meanwhile, Obion and its sister vessels strive to do more with less. Operationally, limited funding has had an effect, determining which navigation aids to service based on criticality to the waterway. But at the field unit level, the inland fleet is getting the job done, Morgan says. At times, crews rely on AtoN teams, small boat stations and the Coast Guard Auxiliary to service aids without getting their more expensive asset – a cutter – underway.

‘THE DIRTIEST YOU CAN GET’ Obion has pushed into a bank so a working party can check the Grandview light and daymarks at mile marker 742. Heading it up is Boatswain’s Mate 1st Class James Helmke, a 14-year Coast Guardsman who’s been on vessels big and small, from Seattle to Pensacola, Fla. He prefers AtoN to multimission.

“The nature of the work fits me better,” he says. “Some of these shore aids are literally drilled into the side of a tree. You have to make things work and use your brain a little bit instead of just riding around in a boat. Not that that’s not important, it’s just not my cup of tea.”

Fireman Andrew Culver carries a chainsaw, ready to begin trimming overgrown brush around the fixed aid so the light is visible from the water going both directions. He reported to Obion in the summer of 2016, straight from boot camp, and immediately fell in love with the assignment.

“It’s so unique,” Culver says. “Where else in the Coast Guard can you go cut brush and 10 minutes later be climbing an aid or getting launched on a small boat to retrieve a stray buoy?”

Boatswain’s Mate 2nd Class Thomas Troia scales the tower to inspect the two green day boards, laminated plywood that serves as a marker. Then he makes sure the lantern above the mile marker sign is working and has enough battery to get through to the next scheduled recharge.

On the ground assisting is Jake Phillips, a fireman apprentice and the youngest of Obion’s crew. “To me, this is more hands-on,” he says of  his job. “Here you can get out and work. I heard this is probably the dirtiest you can get in the Coast Guard.”

Thanks to movies like “The Finest Hour” and “The Guardian,” all about Coast Guard heroics, enlistees often have certain expectations of what they’ll do and where they’ll be stationed. A river tender in the Midwest usually isn’t at the top of their list. But to Morgan, there’s a satisfaction in building a shore aid or setting a solid string of buoys so that next 36-barge tow – covering an area equivalent to a Nimitz-class aircraft carrier – makes it down the river without incident.

“Everybody comes in wanting to fly helicopters or do search and rescue, and that’s awesome,” Morgan says. “This is not as glamorous. But we’re saving lives daily by putting these buoys where they’re supposed to be. People aren’t going to strike a shoal, they aren’t going to run aground, whatever it is, because of the work we do.”