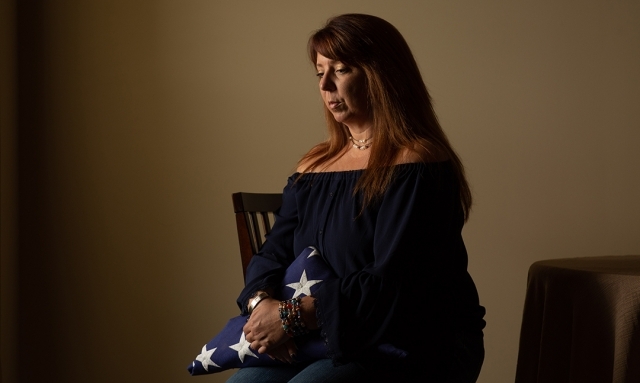 Photo by Kevin D. Liles for The American Legion

Three days after Tammy McCracken’s husband ran a half marathon in October 2010, he woke from biopsy surgery to learn he was being promoted to colonel. Eleven months later, he was dead.

It was another year before McCracken made the connection between her late husband’s aggressive glioblastoma, which doubled in size every two weeks, and his exposure to toxic burn pits during a year-long deployment to Iraq. It took an additional three years and the help of an attorney and private medical experts to convince VA of the link.

Scores of Iraq and Afghanistan veterans have developed heart and lung problems, cancer and a host of other strange diseases that medical experts believe are tied to their exposure to burn pits. Yet McCracken is one of few people to successfully pursue VA claims tied to the U.S. military’s massive garbage-burning program in Iraq and Afghanistan – a practice so blatantly hazardous that it has been banned in the United States since the 1970s. And she worries VA will continue to stonewall tens of thousands of veterans and their families until it’s too late.

“It’s the new Agent Orange,” she says. “They are waiting for everyone to die.”

Remington Nevin, a doctor who served as a preventive health specialist with the 82nd Airborne in Afghanistan, shares her concern. “No one could have reasonably claimed that burning massive amounts of trash in close proximity to large
numbers of troops wouldn’t have consequences,” Nevin says. “In the medical and scientific community, there is overwhelming agreement that exposure to burning trash is inherently harmful. It is reckless in the extreme.”

‘IRAQI CRUD’ McCracken’s husband went to Iraq in early 2008 as a liaison between the Army and the Army Corps of Engineers. There were three football-field-size burn pits near Camp Victory, where he was stationed. He talked about the horrible air quality during Skype calls with his wife and developed a persistent cough so common among servicemembers that they called it the “Iraqi crud.”

David McCracken came home just after Christmas suffering from headaches he blamed on stress. He finally sought medical treatment the following summer and received prescription painkillers. But when he didn’t fully recover from anesthesia after routine surgery, physicians found an inoperable tumor growing in both hemispheres of his brain.

Physicians told McCracken’s husband he would live another two to five years. Radiation slowed the tumor’s growth, and he tried every experimental treatment. He died Sept. 2, 2011 – 30 years to the day after he joined the Army. The circumstances of his deployment, exposure and death are strikingly similar to those of former Vice President Joe Biden’s eldest son, Beau. A Delaware National Guardsman, Beau also was stationed at Camp Victory, was the same age as David McCracken, and was diagnosed with brain cancer after returning from deployment. Biden first publicly raised the possibility that his son’s death was tied to burn-pit exposure last January.

OCCUPATIONAL MEDICINE Tammy McCracken’s attorney hired an occupational and environmental medicine physician to verify the link between burn-pit exposure and the fast-growing glioblastoma that took her husband’s life. Victoria Cassano’s résumé includes 24 years as a Navy physician, occupational and environmental medicine policy work at VA, and positions at DoD, in academia and at hospitals.

While at VA, Cassano helped launch the Institute of Medicine (IOM) committee that ultimately concluded there’s not enough evidence to prove toxic burn-pit smoke harmed U.S. servicemembers. But she disagrees with several of the studies the IOM relied on to make its decision. What’s the right thing to do while the debate drags on? “I think it’s worse to deny one veteran who should be compensated than it is to compensate a hundred veterans who shouldn’t be,” Cassano says. “In cases where there’s a good possibility the disease is due to military exposure, we should compensate the veteran.”

Meanwhile, deliberate efforts to manufacture doubt are appalling, Nevin says. “VA is doing what it normally does: stall for time under the guise of scientific uncertainty,” he says. “This is the same strategy tobacco companies, asbestos companies and chemical companies use. The time to act is when you have plausible evidence that veterans are ill and dying because of their exposure to burn-pit smoke – not certainty.”

VA should follow the example of states that presumptively grant workers’ compensation benefits to firefighters who develop heart disease, pulmonary disease and certain cancers known to be related to smoke exposure, Nevin adds.

DATA TRAIL As she pursed a VA claim on behalf of herself and her three children, McCracken realized she had another way to prove David’s exposure. She’d worked for the military contractor that catalogued U.S. infrastructure in Iraq and Afghanistan, including burn pits. In fact, McCracken was the stateside project leader for the team that took an on-the-ground inventory in the Middle East during David’s deployment. She filed a detailed Freedom of Information Act request, identifying the computer servers where the burn-pit inventory was stored. DoD insisted the data didn’t exist.

However, Mike Keister – a Vietnam veteran and retired Marine who led the ground team in Iraq – confirms his company surveyed 23 U.S. bases and sent data on everything (including the size and location of each burn pit) to the Army. The massive garbage fires shocked Keister. “When I first saw the burn pits, I thought, ‘There’s not a county in the United States that would allow this,’” he says.

Only two of the bases Keister’s team surveyed in Iraq used incinerators. The rest burned everything from plastic bottles to mattresses and electronics in burn pits. Taji, site of a prison for Iraqi detainees, was particularly awful for U.S. guards. “You could barely breathe,” Keister says. “I can’t believe we would do that.”

Yet the U.S. military had a substantial garbage-disposal problem. “Somebody made that choice,” Keister says of the burn-pit solution. “And people got sick because of these choices.”

DREAM DENIED LeRoy Torres is one of them. His breathing problems started during his 2007-2008 tour as a company commander near Balad. That led to frequent trips to the emergency room once he was back in Texas, says his wife, Rosie. Mounting medical problems forced him to leave the Army Reserve just as he was applying for his dream job as a chaplain. His health issues also cost him his civilian job as a Texas state trooper. “It’s been a journey of hell, holding his hand on the days he feels like giving up because he’s not that state trooper or company commander,” Rosie says.

LeRoy Torres was eventually diagnosed with constrictive bronchitis. He also has headaches, gastrointestinal issues, memory loss and pitting edema. Doctor appointments are almost a daily necessity. Even so, VA denies that his crippling health problems were caused by burn-pit exposure, a decision that nearly cost the couple and their three children their home, due to his inability to work. “When we received his rating letter, I went through the roof,” Rosie says. “You are telling me he receives 0 percent for the disease that ended his career and could possibly claim his life?”

Drawing on her experience as a former VA employee, Rosie was able to get LeRoy’s disability rating increased to 30 percent because he has to take steroids for his lung problems. But most returning servicemembers don’t have the knowledge or stamina to navigate the VA system, where she worked for 23 years. “People just give up … and some give up and commit suicide.”

The frustration drove the couple to start BurnPits 360 and begin publicizing the data about burn-pit-related cancers and deaths. “We want the VA secretary and the president to know that one of the greatest disservices to those who served is to become invisible,” Rosie says. “It is our moral obligation as a nation to help our warriors and their families.”

Like LeRoy Torres, Navy reservist Michael Little became ill during his deployment to Iraq. He spent a year as a prison guard adjacent to a burn pit at Camp Bucca. “The black smoke was so thick, it was like fog,” says Little, a life member of American Legion Post 106 in McLeansboro, Ill. “It was dangerous. Sometimes you couldn’t see if the detainees were up to something.”

The 115-degree heat made wearing a gas mask unbearable. Smoke also permeated living quarters, and Little often woke up coughing. He was hospitalized in Iraq with severe headaches that the medical staff wrote off to dehydration.

Little served a subsequent tour as a prison guard at a base in Afghanistan. Even though that base had a crude incinerator, the result was nearly as noxious as the choking smoke he was forced to breathe in Iraq. After he came home, he developed irritable bowel syndrome, PTSD and other medical issues. He’s receiving treatment at Walter Reed National Military Medical Center while he appeals the Navy’s denial of his medical claims.

And worrying about his future.

DISBELIEF More than 129,000 veterans have entered their names and data in the VA Airborne Hazards and Open Burn Pit Registry since 2013. Another 59,660 started but didn’t complete the registration process, the agency says. But just 1,840 veterans have been granted VA benefits for burn-pit-related claims. “There is not enough evidence to conclude what health problems are related to burn pits,” a VA spokesman says.

Veterans and families now see the registry as a diversion. “They are stalling for time,” McCracken says. “I also feel like they are doing everything possible to disprove what is so obvious to those who suffer and those who witness the suffering.”

One of the most tragic aspects of the burn-pit problem: it was avoidable. “Fundamentally, there was never any need for U.S. personnel to be exposed to this self-created health hazard,” Nevin says.

The Special Inspector General for Afghanistan Reconstruction concurs. “Given the fact that DoD has been aware for many years of the significant health risks associated with open-air burn pits, it is indefensible that U.S. military personnel, who are already at risk of serious injury and death when fighting the enemy, were put at further risk from the potentially harmful emissions from the use of open-air burn pits,” John Sopko wrote in a 2015 report. While most U.S. bases in
Afghanistan had incinerators, they were never assembled, were operated poorly or not used for strategic reasons. Instead, the military largely used burn pits, despite knowing the risks to the troops, to save money.

Burn-pit veterans and their families are angry and baffled. “Both of my sons are Marines and served in the Iraq War,” says Doug Dubrish, a Vietnam-era Air Force veteran and member of American Legion Post 225 in Lansing, Mich. “One son received the Purple Heart, and my other son received a different kind of souvenir: cancer.”

Scott Dubrish, who carries shrapnel in his leg from a roadside bomb, is still in the Marines. Brian Dubrish, who was exposed to intense burn-pit smoke, left the service and works for a university in Michigan. Over the past two years, he’s had tumors removed from his heart, spine and lymph nodes, and dealt with other cancers.

“He had no choice but to inhale the air from nearby burn pits,” Dubrish says. “And it’s not just an issue for Brian, it’s an issue for tens of thousands of people.”

Like Tammy McCracken and thousands of other widows, families and veterans, Dubrish worries VA will continue to delay and deny burn-pit claims indefinitely. “My concern is they will drag their feet for 20 years like they did with Agent Orange,” he says. “People don’t have 20 years.”