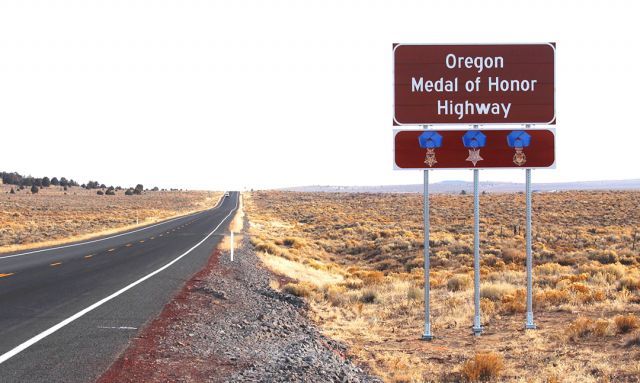 Bob Maxwell and Dick Tobiason hope Oregon’s new Medal of Honor Highway – the longest such in the United States – is the beginning of a nationwide movement. Because of their efforts, the Oregon Legislature designated the 451-mile stretch of U.S. Highway 20 from Newport, Ore., east to the Idaho border as a tribute to the state’s current and future Medal of Honor recipients. Now they hope other states will follow their lead, until Highway 20 is America’s Medal of Honor Highway from coast to coast.

Even if that 3,300-mile dream is never realized, the two Legionnaires from Stevens-Chute Post 4 in Bend have put Oregon servicemembers on the map. In addition, the Bend Heroes Foundation – Tobiason is chairman and Maxwell is director – persuaded the Legislature to designate five other veterans highways, including the World War II Veterans Historic Highway, which connects eight wartime training sites between The Dalles in the north to the California border in the south. There’s also the border-to-border Vietnam Veterans Memorial Highway, and roads honoring World War I and Korean War veterans.

The Persian Gulf, Afghanistan and Iraq Veterans Memorial Highway along the coast is believed to be the first in the United States honoring men and women who served in those wars, Tobiason says. Interstate 5 in Oregon was named The Purple Heart Trail, connecting similarly designated stretches of I-5 in Washington and California and creating a Purple Heart Trail that runs from Canada to Mexico.

“Dick has been relentless in getting recognition for Oregon veterans,” says Sen. Brian Boquist, chairman of the Oregon Senate Veterans and Emergency Preparedness Committee. Tobiason’s efforts not only honor those who served in past conflicts, but set the stage for support of veterans in the future.

This work also resonates with veterans outside Oregon. “I can’t say enough about Dick’s efforts to do this,” says Jim Taylor, an Army veteran who received the Medal of Honor for rescuing wounded soldiers from armored attack vehicles and taking out an enemy machine gun crew in Vietnam in 1967. He was wounded by a mortar round.

“They are honoring not only the Medal of Honor recipients, but also all the great men and women who serve their country.”

Tobiason was inspired to champion highways honoring wartime veterans while traveling across the country. So he enlisted Maxwell’s help with the Medal of Honor and World War II highways and began building the case.

“He’s been my inspiration for 14 years,” Tobiason says of Maxwell, who is the nation’s oldest living Medal of Honor recipient. American Legion posts in Oregon, and Past National Commander Charles Schmidt, have helped dedicate the highway signs.

No taxpayer funds have gone toward the six highway designations. The Bend Heroes Foundation raised $110,000 to pay for the 79 highway signs along what is now 2,500 miles of roads recognizing Oregonians’ military service. It means drivers crossing the state will encounter a highway sign honoring veterans about every hour, Tobiason says. This includes approximately 500,000 Oregon veterans who have served in five major conflicts since World War I – 6,022 who were killed and 15,000 who were wounded.

For its part, Oregon’s Medal of Honor Highway acknowledges 26 veterans with ties to the state who have received the nation’s highest award for valor. A dozen other states have similar highway designations, Tobiason says. But none honor all of the recipients with ties to the particular state or extend border to border. In addition to the highway signs, the Bend Heroes Foundation will install bronze plaques in the 12 Oregon cities with  connections to the state’s Medal of Honor recipients, so people can learn about the veterans, their lives and contributions.

“What’s most rewarding is bringing unknown Medal of Honor recipients to the attention of the public – not just on paper in some obscure archive, but right in front of people when they drive down the road,” Maxwell says.

This includes four Medal of Honor recipients with Oregon ties who were rediscovered as a result of Tobiason’s work. Two served in the Civil War, one served in the Philippine Insurrection and one helped put down the Boxer Rebellion in China. All have, or will receive, new grave markers noting the award.

Maxwell, however, is not looking for recognition for himself. “I’m just one of 26 – proud to be among those people who have done great things, either saving lives or advancing a military objective.”

The first two signs on U.S. Highway 20 were installed between Bend and Sisters on Oct. 26 – Maxwell’s 97th birthday. A World War II Army veteran, Maxwell saved three soldiers when he threw himself on a German hand grenade in Besançon, France, in 1944. Maxwell lost part of his right foot and suffered shrapnel wounds when the grenade exploded. President Franklin D. Roosevelt signed Maxwell’s Medal of Honor proclamation shortly before the president died.

The 12th and final Oregon Medal of Honor Highway sign was erected near Corvallis in early May, with a dedication ceremony at Oregon State University’s Memorial Union – a building that has specialsignificance because it was built by World War I Medal of Honor recipient Edward C. Allworth.

From there, Tobiason and Maxwell, both Army combat veterans, will focus eastward.

“We are working with veterans in Idaho – where I was born – to extend the Medal of Honor Highway across 411 miles of U.S. Highway 20,” Maxwell says. “I believe other states will soon follow Oregon’s lead once they find out about it.”