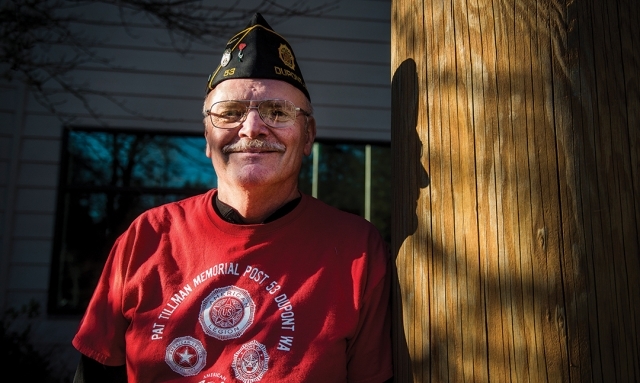 Bob Schwartz started Pat Tillman Memorial American Legion Post 53 in Dupont, Wash., in 2007. In five years, the post grew to more than 100 members and has become a vital part of the community. Photo by Joshua Bessex

In the more than 10 years since Bob Schwartz first went door to door recruiting members for Pat Tillman American Legion Post 53 in DuPont, Wash., Legionnaires have become a force there for civic engagement, an inspiration to the retirement community where they meet, and the go-to volunteers for almost anything in the city.

“They do everything for the community, from cleaning up our interchanges to hosting candidate forums on veterans issues,” says DuPont City Administrator Ted Danek. “We really rely on them to improve our quality of life.”

DuPont knows Post 53 as the service organization sponsoring Little League teams, raising money for scholarships and gathering donations for the local food bank. Legionnaires also support a Cub Scout pack and Girl Scout troop, and host a barbecue competition as well as frequent community pancake breakfasts. DuPont’s signature Fourth of July celebration has Post 53 written all over it, as did DuPont’s first 9/11 remembrance in 2016. And that’s just for starters.

“I think one of the great things about the Pat Tillman American Legion Family here in DuPont is that they do things without looking for credit or a pat on the back,” says Danek, a retired Air Force pilot who was so impressed that he joined Post 53. “So that quiet service – that silent service that we talk about – they practice it in such a magnificent manner.”

Door to Door Schwartz, a past Department of Washington commander, started Post 53 in 2007 in this city of 9,500 residents, located near Joint Base Lewis-McChord. He persuaded the Patriots Landing retirement community to host the post’s meetings. It was a natural fit. Approximately 90 percent of Patriots Landing residents are veterans or surviving spouses, says Karen Getchell, community liaison.

The American Legion was one of the first veterans groups to meet at the retirement community, founded by Army veteran Gene Lynn. Today, Post 53 is one of the largest veterans groups to use the facilities – and at no charge. “It’s just our way of giving back and supporting our veterans,” Getchell says. “It also allows our residents to continue to participate in these organizations. They love having their brothers-in-arms in the building.”

Schwartz also set up a Legion booth at a city park during DuPont’s annual Fourth of July celebration, where he made a key connection: “I recruited a staff sergeant who turned out to be that spark plug you are always looking for,” he says.

That spark plug was Leo Gruba, who says meeting Schwartz in the summer of 2013 was life-changing. “He’s become my mentor,” says Gruba, who served as post commander and 4th District commander and is now Department of Washington adjutant. “And Bob and his wife, Karen, have become the Pacific Northwest grandparents to my kids. They genuinely and completely embraced us.”

Gruba and other younger servicemembers pushed Post 53 to make programs more family-oriented. “Prior to having kids, I spent my entire adult life away from my family,” says Gruba, who retired from the Army in 2016. “Now when I walk out the door because I want to serve, I want to include my family.”

That attitude has helped DuPont attract other post-9/11 veterans. “The main thing you are going to have to do to get younger guys to join is to show them there’s a benefit to them and their family to being involved,” Schwartz says. “We are defining success by making it a family affair.”

Take Gruba’s family: His wife is part of Post 53’s Auxiliary unit and his sons are members of its Sons of The American Legion squadron, one serving as detachment historian. “To see my sons passionate about The American Legion – that’s what it’s all about,” Gruba says.

He also believes in giving members a voice and being open to change. “If you want to recruit guys my age, listen to what we want to talk about,” he says. “We don’t care about the political divide that separates a lot of the United States. We care about the things that we (The American Legion) have been out front on – the GI Bill and reform of VA.”

Liz Hunt and her husband are examples of what happens when members are empowered to take on new projects. They started an annual appreciation day for Gold Star Mothers that includes a trip to the spa, lunch at a local restaurant and a rare chance to connect with other parents whose children made the ultimate sacrifice. “Nobody else can understand what they’ve been through,” she says.

Hunt and her family also grow vegetables at a community garden that supplies produce to two local food banks whose customers include many veteran families.

Post 53 takes care of its Legion family. Hunt can’t imagine life without the meals, moral support and helping hand when her husband’s debilitating chronic pain – the accumulated damage of more than two decades as a special operations soldier – requires a trip to the emergency room. Even Danek shows up when word gets around that Hunt needs help juggling her roles as her husband’s caregiver and mother to two sons.

“My life would be a lot more stressful and a lot more isolated without the Legion,” says Hunt, an Elizabeth Dole Foundation alumna. “They know better than anyone else what I’m going through.”

Neighbor to Neighbor Post 53 helped build its reputation for service by attending city council meetings, working with groups like the Lions Club, and using social media as an outreach tool. “There are so many of our neighbors who have ideas that we, as The American Legion, have programs for – aid and welfare of our young people, education and natural disaster relief,” Gruba says.

Providing direct support to the high school’s cheerleaders was a great way of getting to know their parents, some of whom joined the Legion. “These are people who wanted to be active because they realized we are there for our local community,” Gruba says.

Sponsoring Scouting programs has had a similar effect. Cubmaster John Appelt joined Post 53 after its members lent a hand to his pack.

“They have really helped us out financially and help out with our events such as the spaghetti feed, campouts and our ceremonies,” he says. “They even helped us purchase a new pack flag and flag poles – things we need.”

The Scouts and Post 53 have joined forces on several community projects – including collecting and delivering thousands of pounds of food for the local food bank. “It’s good to see (Scouts) growing up and having the role models we have here,” Appelt says.

All of this changed Appelt’s view of the nation’s largest veterans service organization. “I had a misconception about The American Legion as a bunch of old guys sitting around just drinking beer and not getting involved in much,” he says. “Joining really opened my eyes. The Legion is really involved in improving people’s lives.”

Post 53 is also remarkable for what it doesn’t have – its own building. Members see that as a strength. “It really turns us loose. We don’t have to worry about building management or maintaining it, and it allows us to better support Legion programs,” Schwartz says.

Membership hasn’t suffered for it. Post 53 has gone from 66 members in 2012 to 100 in 2017, and today the Auxiliary, Sons of The American Legion and American Legion Riders are all active here.

“If I won the lottery, we’d build a building and never use it,” Gruba says. “Our programs are our post here. People know us for what we do – not where we are.”

It’s a formula already proven successful. “If I had known what The American Legion was,” Appelt says, “I would have joined a long time ago.”