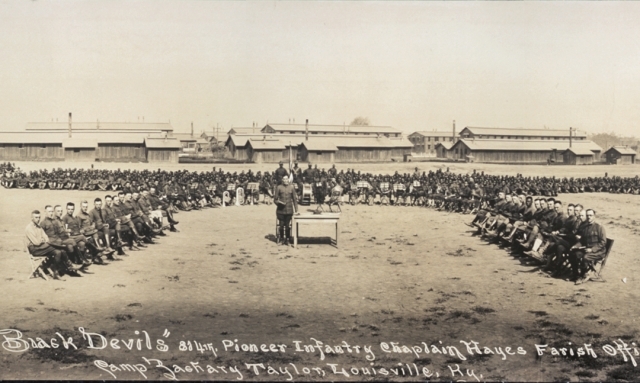 When the organizers sought spiritual leadership for the newly formed veterans group, not surprisingly they turned to military chaplains for guidance. Chaplains had shared the hardships and suffering of the soldiers, sailors and Marines in the trenches of the Great War. They knew the emotional and psychological toll combat had taken on them.

Four chaplains – a Roman Catholic, an Episcopalian and two Baptists – were instrumental in the founding of The American Legion and provided a spiritual underpinning for the new organization. These four – Charles H. Brent, Francis A. Kelly, Thomas H. Wiles and John Washington Inzer – helped chart a course of service for God and country. Representing different faith traditions, these men unselfishly and in a nonsectarian manner skillfully guided the religious and patriotic principles of individual obligation to the community, state, nation and God.

“It was a great soldier who said that the army has not merely a body but a soul and a conscience as well. I believe the conscience of the army is speaking in this committee’s report. I believe the army’s soul is speaking in it. I was present on Saturday, at the beginning of this caucus, and I will tell you frankly that I was fearful at that moment, lest you should create a great mechanism without adequate purposes. My fears have been wholly allayed and I see in the report of your committee the ideals not only of the army but of the nation adequately expressed, and I wish to tell you gentlemen that so far as I have any ability to promote this great movement I give you my most hearty support. I believe that the army of today, when it goes back to citizen thinking and citizen acting, will be capable of contributing to the commonwealth of the United States, so as to change the character of the whole country and lift it up to a higher plane of political, industrial and religious life.”

Two months after the Paris Caucus, wartime veterans in the United States gathered in St. Louis to finalize plans for The American Legion. They did not immediately catch on to the spirit of the Paris Caucus, which had deliberately refused to take action on broad questions of policy until veterans at home were consulted. The inability to come to consensus on critical issues threatened the very existence of the new organization.

Baptist Rev. Inzer, a revival preacher and Army chaplain originally from Texas, was a member of the founding executive committee of The American Legion. In St. Louis, he delivered an impassioned message that saved the day and prevented the Paris spirit from being lost on the St. Louis crowd. In part, he said, “Now, the keyword that I want to say in the beginning is, at all costs we want to save this organization. We do not want anything to arise today that will in any way mar the spirit of this great assembly and the work that it is going to do in the future. While you were deliberating here these past two days, some of you thought only of this hour and this moment. But gentlemen, I had an eye cast into the future, and I was dreaming dreams and seeing visions of the years that are to come and the wonderful work, the wonderful influence, and the mighty power that this organization is going to have and exert upon this nation and upon the whole world, and I want you to think of it in these terms ...

“Gentlemen, I want to say just here, if you can only think about this Legion ... as the jewel of the ages, I believe that is the best interpretation I know. I cannot say anything greater than this: I believe God raised up America for this great hour. I can say that the strong young man of the time is to be The American Legion in this country and in the world.”

Some might say the Legion’s founding principle of service to God and country is a dialectical ambiguity, or even a conflict of interest, supporting principles of peace and war alike. After all, isn’t faith and religion, in the end, about peace and studying war no more?

“Love your enemies, do good to those who hate you.”

“If anyone strikes you on the cheek, offer the other also ....”

But, of course, we all know there is more to it than that. As one chaplain friend of mine once said, “We are all peacemakers. We just have different roles.”

We human beings were created for lives of peace but find ourselves living in a dangerous and often destructive world, and so we depend on the strength of the military to resist evil and create conditions where justice and peace can thrive. It’s like the Marine who once said to me, “Chaplain, if you were doing your job better, I wouldn’t have to be doing mine.”

Another chaplain put it this way: the world only needs two kinds of people to keep it safe and at peace, warriors and chaplains. The chaplain calls the world toward nonviolence as the only way to heal a terrifying and violent world. The other, the warrior, does God’s work by defending civilized society and those who are vulnerable. Our world needs both prophets of peace and responsible warriors. As my friend said, “The chaplain is needed to keep the warrior honest, and the Marine is needed to keep the chaplain alive.”

It is not trite to say that we live in a very challenging time. Yet I remain thoroughly convinced that America is a miraculous gift of God. It is not the new Israel or the kingdom of God on earth. But at the same time, it is too unlikely to be an accident, and too wonderful to be of our own doing.

Surely no nation in history has provided such opportunity for individual freedom and quality of life alike to all its citizens. And just as surely, no nation in history has given so much and been of such positive benefit to the other nations of the world. America’s very existence proclaims, protects and defends the vision that freedom and peace may be experienced throughout the world.

Those who would subject the people of the world to their inhumane control must first block from the oppressed the light of freedom and hope that shines so brightly in us. The determination of our enemies to knock down our towers and attempt to cripple our inspiring American influence is, in fact, a twisted acknowledgement of America’s great and enduring value to the world.

That we live in America is, in itself, an act of grace. We may have come into it naturally – born into it – or were welcomed as immigrants and naturalized. By either route, America has been, for every one of us, a stupendous gift – a country built collectively by cherishing us individually; a country built of the effort of servicemen and women, statesmen, farmers and factory workers, those who toiled on the railroad and those who bankrolled it. Our philosophers, politicians and preachers, all together, created something bigger than any of us. And then they gave it to us.

Any true gift is infused with opportunity and responsibility that arises from it. An inherent talent, a good education or money in the bank can all cry out to the blessed, “What will we make of this? What will we do individually? What will we do collectively in light of how many have done so much, and sacrificed so much, for us?”

The founders of The American Legion, warriors and preachers alike, understood the greatness of the gift. Soldiers, sailors, airmen, Marines and Coast Guardsmen over the past century have secured that gift in times of threat and war.

The motto of my Navy Chaplain Corps is “Vocati Ad Servitium.” This means “called to serve.”

The spirit of that motto has guided The American Legion for nearly 100 years now, all the way back to the earliest founders, four of whom were chaplains who not only embraced, but demanded, that the first words out of our mouths every time we gather to celebrate the gift of America and The American Legion are “for God and country.”

This essay is an adaptation of a message delivered on Aug. 30, 2015, at the 97th American Legion National Convention in Baltimore, when Tierian “Randy” Cash was serving his first term as national chaplain. Cash is now adjutant for the Department of North Carolina.