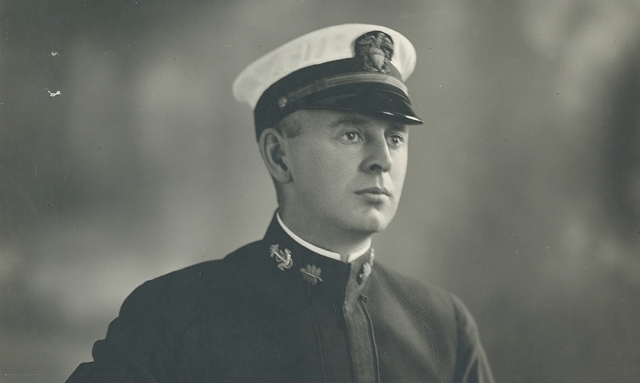 In retirement, former U.S. Ambassador Michael B. Smith spends his Mondays – “1 to 5 in the afternoon, my tour of duty” – prowling Preble Hall, the U.S. Naval Academy Museum in Annapolis, Md. There, he offers visitors his perspective on the branch of service whose history is anchored in the Massachusetts town where his grandfather, Raymond Osgood Brackett, made a name for himself as a World War I veteran, business leader, community builder, coach and member of The American Legion’s founding generation.

“He was a remarkable man,” says Smith, who spent more than 30 years representing the United States in diplomacy and trade under five administrations and was named an ambassador by President Ronald Reagan in 1981. “I don’t think he ever fired a shot in anger, but he was renowned as an operator. He knew how to get things done.”

Smith never met his grandfather, but he knows his legacy through journals and news clippings. “He was an extremely intelligent man – a jack-of-all-trades who could do anything.”

Brackett’s story is inextricably woven into the fabric of the early Navy and Marblehead, Mass., where Revolutionary War patriots set sail for independence in 1775 as a “militia of fishing ships,” Smith says.

The Brackett family came to Marblehead in the following century. Smith’s great-grandfather was owner of the Rockmere Hotel, a posh resort along Skinner’s Head. Raymond Brackett and his brother Paul later expanded the hotel to 220 rooms. At a time when the wealthy came to spend “the season” – meaning most of a summer – it became the fashionable place to be on the north shore, Smith says. It was also not closely patrolled during Prohibition.

“Marblehead is a most unique place, and its people – especially those of the World War I and World War II generation – were clever and hardworking,” says Lorraine Allison, a Salem, Mass., writer who profiled Brackett in 2012 for the local newspaper. “Among them, Ray Brackett was truly the most ingenious, innovative and charming character. His Rockmere Hotel housed Hollywood celebrities. As a result, Marblehead became a mecca for summer theater and the elite.”

An accomplished sailor in a town full of mariners, Brackett entered World War I as a Navy reservist and quickly rose from lieutenant to lieutenant commander. He commanded USS Lakeview, a converted freighter transformed into a minelayer that also hauled cargo and troops to and from England, Scotland and France.

Brackett was in France in 1919 after the armistice and may have attended the Paris Caucus when The American Legion was formed that March, Smith says. “He was probably the only one there who spoke fluent French. He loved The American Legion and was very active.”

When Brackett returned from Europe for the final time after the war, he ceremonially steamed Lakeview into Marblehead Harbor so his father could see his ship, the largest vessel to cruise into the inlet since Constitution took refuge from the British in the War of 1812. The next day, Brackett’s father passed away at 52.

After discharge, Brackett and his friends founded American Legion Post 32 in Marblehead, which still exists today. A community servant who had led local efforts to light the streets of Marblehead prior to the war, Brackett spent the 1920s fueling local commerce, coaching football, luring a minor league baseball team to town and drawing attention to one of the Atlantic Seaboard’s premier yachting destinations.

Brackett had graduated from Harvard shortly before future American Legion National Commander Hanford MacNider did so in 1911. Their relationship prior to the birth of the Legion is unclear, but in 1921, when MacNider of Iowa was elected national commander at the 3rd American Legion National Convention in Kansas City, Brackett was elected as one of his five national vice commanders.

Whether by design or not, Brackett was a perfect fit for his role in the two-year-old American Legion. Following the national convention, France’s Marshal Ferdinand Foch – commander of Allied forces in the war – joined other world leaders by dedicating the Tomb of the Unknown Soldier in Arlington, Va., before setting off on a cross-country trip to see and thank the nation that had sent its sons and daughters to fight in France.

“It was essentially a victory tour,” Smith says. The French-fluent Brackett served as a translator and official photographer for the American Legion-led journey.

Smith cherishes the scrapbook of photos that has been handed down to him from his grandfather. In it, Foch, MacNider, Brackett and others are seen traveling the country by rail, through Pittsburgh, Chicago, St. Paul, Minn., and Spokane, Wash. – stopping along the way to greet Indian chiefs, loggers in Idaho and to simply walk the tracks. The tour passed through Seattle, San Francisco, Los Angeles, the rim of the Grand Canyon and New Orleans before the French leader returned home.

When first I met you and came to admire you as fighters, cheerful, subject to discipline under your splendid leader, General Pershing, the days were dark indeed. Yet you smiled then as you fought, and your cheerfulness and bravery helped much to bring us victory and peace.

When next I met you, it was in your country. The alarms of war were over. You were engaged actively in those pursuits of peace which are so essential to happiness and prosperity – hard work. I have come to love all Americans for their spirit of diligence, for their generous-heartedness. France and the United States are indeed close together, as they always have been.

After the trip, Foch gave Brackett a monogrammed cigarette case, which Smith keeps among his grandfather’s effects, including handwritten journals detailing his trans-Atlantic wartime voyages. “They are very explicit,” Smith says. “Each entry always has the longitude and latitude.”

Two years after the Foch tour, Brackett secured Marblehead as the unlikely venue for an American Legion Department of Massachusetts convention. Critics doubted he could keep families entertained for the eight-day gathering, in a town of barely more than 4,000 residents. Smith says some of his high-profile guests, such as John Ringling North – of the Ringling Bros. and Barnum & Bailey Circus – helped out by bringing the show to town for the crowd of 8,000 convention-goers. “He entertained the wives and kiddies with that circus, for eight days,” Smith says. “That was the sort of man Raymond Brackett was.”

He also arranged for an exhibition professional baseball game during the convention, thanks to team executives who were visitors of the Rockmere. “He had a baseball kick,” Smith continues. “The town of 4,000 people suddenly had 9,000 fans. It was typical of what he could do.”

Later, Brackett brought the big tents back to Marblehead to entertain the United Spanish War Veterans during their 1926 department convention, and again in 1929 for festivities commemorating the anniversary of the Navy’s birth.

In 1931, Brackett arranged to welcome to Marblehead Harbor USS Constitution, which had not been back since it narrowly escaped the British there, under the big guns of historic Fort Sewall.

The Great Depression – along with changes in the ways Americans vacation – brought an end to Brackett ownership of the Rockmere. It was sold in 1937. In July of that year, at 52 – the same age his father succumbed after seeing Lakeview in Marblehead Harbor – Raymond Brackett passed away.

The Rockmere changed hands twice more before it was razed in the 1960s and condominiums went up along the rocky coastline at the edge of a town rich in history, some of it tethered to The American Legion and a past national vice commander who embodied the spirit of his generation of veterans.