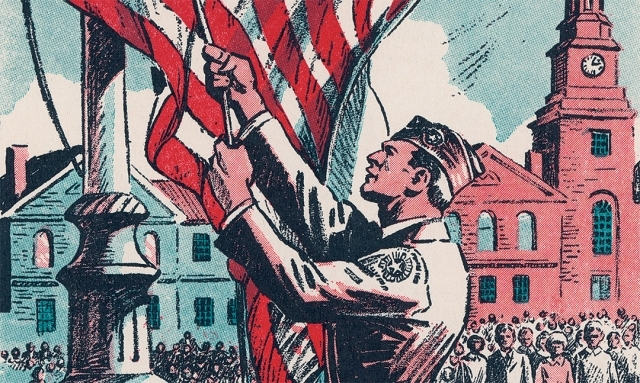 Historical context is vital to understand how Americanism urgently arose as a pillar of what would become the nation’s largest veterans organization. American Legion founders, the core of whom were front-line officers in World War I, had emerged from the all-volunteer prewar Preparedness Movement with firsthand concern about the prospect of combat with limited resources, weapons, training and supplies. After the armistice, they added another ingredient to their concerns: public understanding and appreciation of the American identity.

Only about half of America’s teenagers attended high school regularly at the time. A large percentage of World War I troops were conscripted immigrants, some of whom had barely begun to learn English as a second language, which caused communications breakdowns in the service. Most were under-educated in U.S. government, law and history. Few understood what the U.S. flag represents or how American “justice, freedom and democracy” are defined when compared to other nations.

And, to the disgust of those who marched off to the Great War in Europe, thousands of otherwise military-eligible adult immigrants had used their foreign citizenship to avoid service, no matter how long they had lived in the United States. The early Legionnaires had a term for them: “alien slackers.” To address this issue, the early American Legion set U.S.
citizenship among immigrants as a top priority.

The American Legion’s founders were deeply concerned how the Bolshevik Revolution in Russia might spill over into the United States. Communist recruiters were already pitching their thinking to young Americans, including troops still stationed in Europe after the armistice. Fascism and Nazism later appeared on the global landscape and recruited in the United States at a time before media or policymakers fully understood the intentions of Benito Mussolini or Adolf Hitler. The American Legion was early and firm in its opposition to anti-democracy ideologies; they had fought “to make the world safe for democracy.” To the founders of the Legion, the best kind of “ism” was Americanism.

Racism was specifically denounced by the early Legion, which passed a resolution in 1923 that remains on the books and condemns any individual, group or organization that “creates or fosters racial, religious or class strife among our people, or which takes into their own hands the enforcement of law, determination of guilt, or infliction of punishment, to be un-American, a menace to our liberties and destructive to our fundamental law.”

The Veterans Day parade massacre of 1919 in Centralia, Wash., which took the lives of four Legionnaires and a deputy sheriff and led to the mob lynching of one suspected killer – a member of the radical Industrial Workers of the World (or “wobblies”) – galvanized the newly founded veterans organization, then meeting at its first national convention in Minneapolis. The massacre showed that the conflict between Americanism and other “isms” could turn deadly.

The American Legion would take a proactive approach to Americanism, forming a committee that would become a national commission to advance the concept through programs and services. By January 1920, citizenship and naturalization programs were forming at local posts, and the Legion offered its services before Congress to provide such education.

In 1921, The American Legion formed an alliance with the National Education Association, which accepted the Legion’s offer “to cooperate with the NEA in securing for America a program of education adequate to meet the needs of the 20th century ... and which will make all, whether native or foreign-born, good American citizens.” The alliance led to National Education Week and the 1926 publication of a two-textbook set, “The Story of Our People,” written by historians under American Legion direction.

The Legion’s Americanism Commission led the first of two national flag conferences in 1923, bringing together representatives of 68 other interests – military, education, government, civic and business – to establish what in 1942 became U.S. Flag Code. By that time, most states were requiring the Legion rules. The organization would ultimately become known as a national ambassador of flag respect and protection.

The American Legion founders believed veterans should be catalysts in local unity and assistance, strengthening communities and building pride through individual obligation. “We must continue to serve the country in the same spirit we had in war, and we can do that only if we have every post doing something for its community,” American Legion Past National Commander Hanford MacNider said when introducing what was called the “Iowa Idea” in 1923. The Americanism Commission led the movement and launched a nationwide Community and Civic Betterment Bureau that brought hundreds of parks, pools, theaters, clinics, bands, sports programs and forums into existence, led by American Legion posts.

Pennsylvania American Legion posts began presenting school awards as early as 1921 to students who were evaluated on five points: honor, courage, scholarship, leadership and service. The school awards program, which continues today, was adopted nationally in 1926, inspiring generations of young people to serve proudly in their communities.

When the Great Depression struck, American Legion posts fed the poor and unemployed in their communities. When natural disasters hit, the Legion rescued victims, provided security, built refugee camps, fed the stranded and helped communities rebuild. All such activities, though some were overseen by different commissions of the organization, were considered expressions of Americanism.

Throughout the decades, American Legion youth programs were established and operated to do more, for instance, than teach young people to hit baseballs and bullseyes. American Legion Baseball, which traces its roots to the Department of South Dakota convention of 1925, originated when Maj. John Griffith, commissioner of the Big 10 Conference, told delegates that sports could do more than serve as “an amusement feature for ourselves in the post … but as a matter of citizenship training.”

American Legion Boys State, which began in Illinois in 1935, was a direct response to the communist-inspired Young Pioneer Camps attempting to lure U.S. youth. Boys State took off across the country and established itself as a program like none other to teach young people how government functions in a successful democracy. Through the years, Boys State inspired thousands of future leaders, including President Bill Clinton, Vice President Dick Cheney, NASA astronaut Neil Armstrong, CNN co-founder Lou Dobbs, Purdue University President Mitch Daniels and college football coach Nick Saban.

Following the same reasoning, the American Legion Oratorical Contest, which had its first national competition in 1938 and now awards more than $138,000 in scholarships annually to top finishers, is not all about rhetoric. It is a constitutional speech contest; competitors must study and know the Constitution to succeed, preparing orations they have researched, written and rehearsed as well as impromptu speaking on randomly assigned constitutional topics.

The American Legion’s relationship with Boy Scouts of America – the first youth program singled out by national resolution (at the first national convention, 1919) – grew to include numerous Americanism activities for Scouts, including ceremonies to respectfully retire worn-out U.S. flags.

American Legion National Commander James E. Powers wrote in the May 1963 American Legion Magazine that he had been challenged to define the term “Americanism” for a new era. He wrote that of the 10 lines in the Preamble to The American Legion Constitution, seven refer to principles of Americanism.

“My real definition of Legion Americanism in 1963,” Powers explained, “would be the living record of what Legionnaires do this year to improve community, state and nation in thousands of projects ... what they do to give backbone to law and order ... what they do to oppose militantly the endless drive to supplant our American way with dictatorship … what they do to transmit American principles through our Boys States and Girls States… through teaching thousands of youngsters the rules of fair play on the baseball diamond … what they do to make the Constitution of the United States a familiar text to hundreds of thousands of boys and girls in our oratorical contest … A full account of these deeds would be a definition of Americanism so huge it would fill an unabridged dictionary all by itself. It is a definition that is modern, progressive and alive.”

“True Americanism is an ideology that is continually nurtured within one’s soul through individual daily actions, thoughts and beliefs in what their responsibilities are to be, blessed to live in one nation, under God, with liberty and justice for all.”