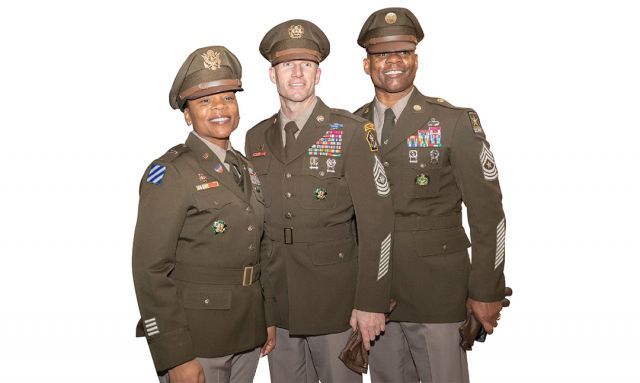 At a time when modernization is front and center for the U.S. Army, the branch’s top noncommissioned officer is reaching into the past to revive an image for a new generation. The service dress uniform style of World War II officers is coming back. The move, which had 72 percent approval in an October 2018 Army Times poll, aims to project tomorrow’s soldier as a sharply outfitted professional, able to fight and qualified to work in any chosen career field after discharge.

“The No. 1 reason is to identify to the American people that we have a very professional force,” Sgt. Maj. of the Army Daniel A. Dailey says. “The Sgt. Maj. Dailey dream is that every soldier leaves the Army with either a degree or a credential. We are on a path to success.”

Starting this year, the Army will begin issuing the new service dress uniforms – to recruiters first, with a full rollout in 2020. The new “Army greens” are historically accurate representations of the “pink and greens” – so called due to the pinkish hue the pants could assume after laundering – worn by iconic World War II officers like Army Chief of Staff Gen. George C. Marshall.

Dailey wore a prototype of the throwback uniform at the Army-Navy football game in December. “I’m one of the guys who gets to walk onto the field with the president, so the cameras were there,” Dailey said. “I didn’t have to tell anybody what it was. I didn’t have to remind anybody. I was immediately recognized as, ‘You look like a soldier.’ That was the intent.”

Dailey, an American Legion member and father of a Virginia American Legion Boys State alum, spoke with The American Legion Magazine about the uniform change and other innovations he’s driving to advance the Army’s image among families, recruits, soldiers and industries looking for skilled professionals who served their country.

To this day, grandchildren of that greatest generation recognize that uniform, universally. It’s distinguishable. It’s prominent. I want the American people to look at our soldiers and say, “Man, that’s a good-looking young man or woman who is serving our country.” And the acceptance rate of our soldiers – in my recollection on any survey on uniforms – is higher than any other.

How closely does this version match the original?

We wanted to be historically correct, but to say that definitively is very difficult. It transformed rapidly (during World War II) because of the scale of what we were doing. There were so many manufacturers, different hues in fabric, different types, and there were so many changes – colors of rank, all kinds of things. Imagine ... we had millions of people in the Army at that point.

We are calling it an accurate historic representation. Is it 100 percent accurate? No, because we want to capitalize on modern-day fabric capabilities, wearability, all those things. It is not the traditional wool of World War II. There is a fabric that is a wool blend that will last longer, wear better, be cooler in the summer and warmer in the winter. It’s a higher-quality uniform that takes us from a four-year to six-year wear life.

Where will it fit into a soldier’s wardrobe?

Before we made the dress blue uniform we have now, we had three types of uniforms: utility, service dress (your business uniform), and then our dress blues. What we found over time was we didn’t have a divide between your service dress and your formal uniform. In short, we were wearing a tuxedo to work. It is still the signature uniform of the United States Army, and it will go back to become the dress uniform. So, we will have a utility, a service uniform (which is the greens, our professional uniform), and then our dress formal uniform. And then the most formal is the dress mess, which is equivalent to a civilian tux with tails, worn to state dinners and balls.

When will soldiers begin wearing them?

We’ve already started working with industries to produce the first 10,000. We’re focused on the Northeast, with the recruiting battalion – they will be the first – we’re hoping in the spring. We will expand that to the rest of the recruiters, about 9,000 more, and then we will produce about a company’s worth for the Old Guard (and) about another 120 to Pershing’s Own, the U.S. Army Band, because they perform around the world. And then, consistent with all other uniform (changes) in history, we will outfit about 500 senior leaders and their sergeants major.

At what point will they be issued?

We will start issuing this uniform to soldiers after basic training. They will either get it at the end of AIT (advanced individual training) or when they get to their first unit. When they graduate from AIT is when they are fully certified to be a soldier, qualified in their MOS (military occupational specialty). That reduces cost and allows them to stabilize their body weight, so we don’t have to re-fit and issue new uniforms.

Do you see the new uniforms boosting recruitment?

I believe that it is easier to change a perception than to instill one. I believe this uniform is going to help us. All we have to do, as senior service leaders, is change the perception, to be positive.

There is unfortunately a depleting number of individuals 18 to 24 who are eligible for military service. Then you mix that with propensity to serve, and recruiting becomes a challenging problem – not just for us but industry, too ... we’re all looking for the same product. We want a high school grad of good moral character who isphysically fit and 18 to 24. Everybody wants that.

What are some of the Army’s selling points?

There is a mission we have – to defend the United States of America – but we do much more than that. We train and educate you. We certify you. We give you credentials now, according to that of your civilian counterparts, as you serve. We provide you education opportunities unlike any other organization. And we give you a sense of responsibility and leadership. We want that message to resonate at dinner tables.

How is the Army helping with career training?

The goal is to credential every single soldier in their military occupational skill when it directly translates or correlates to a civilian credential or certificate. When a young soldier comes in, each one of the centers of excellence where they are trained has as an initial mission to find a way to civilian-credential those folks. For electricians, welders and plumbers or MPs, it’s actually not hard. We are making a lot of strides, but we still have this big gap because most of the Army is combat arms. How do you equate what they do to civilian skills?

Just like we have tuition assistance, we came up with the idea of credentialing assistance. We worked with Congress and the Department of Labor, and happily, this last National Defense Authorization Act round authorizes that service secretaries can create credentialing assistance funds, and we just launched in October, at Fort Hood, Texas, the first limited-user test. What we’re doing is offering civilian credentialing out there to all soldiers, regardless of their MOS.

Simultaneously, we have worked with industry over the last five or six years to create what is called Career Skills Programs. This is where industry comes in and says, “We’ll train and educate your soldiers, most of them during the last 120 to 90 days of transition, in a skill that we need.” Now we have this great network across all of our military installations, where our soldiers – while they are in transition – they will fully certify them. For example, at Joint Base Lewis-McChord in Washington, the HVAC (heating, ventilation and air conditioning) industry said, “Hey there’s a huge shortage of HVAC technicians. We’re going to train and educate these soldiers and have them fully certified on residential and commercial HVAC systems before they get out of the Army. Those programs have 95 percent job placement.

Our soldiers are starting to realize now that credentialing is an avenue to the American dream.

The intent is to expand this across the entire Army, and those soldiers will be able to choose from what we think are about 1,500 credentials that we have vetted as legitimate. Those are all on what is called the COOL website – Credentialing Opportunities On-Line (cool.army.mil).

Why is this such a passion for you?

Every mom and dad, to include me, wants one thing for their child, and that’s a little better chance at life than we all had. We’ve got to tell them that the Army is a viable option to get there, because it is. Is a uniform going to do that solely? No. There’s a lot of other things that are going to have to happen. But everything starts with a picture, and if you can put a soldier in hometown America in a uniform that’s universally recognized by what they believe to be the greatest generation, you’re partway there. The door is at least open. That’s the intent of what we are doing.