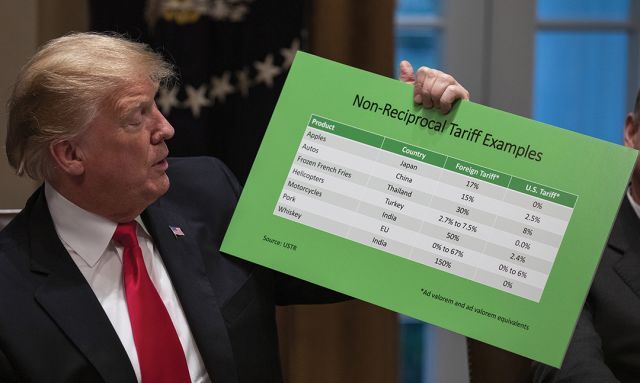 President Trump shows a chart listing examples of non-reciprocal tariffs during a meeting at the White House. Getty

Nothing says “USA” quite like a Ford Mustang – except, perhaps, a Toyota Camry.

The Camry includes more domestic content (78.5 percent) than the Mustang (76 percent). In fact, according to the Made in America Auto Index, even the cars equipped with the most American content (Chevy Traverse, Buick Enclave and GMC Acadia) rely on foreign sources for about 15 percent of their parts.

A similar picture emerges when we pivot from Fords to smartphones. With the iPhone’s manufacturing process spread across China, South Korea, Japan, Germany and the United States, where exactly is Apple’s ubiquitous phone made? Likewise, Honda and Toyota have plants in Ohio, Alabama, Indiana, South Carolina, North Carolina, Georgia, Kentucky, Texas, Mississippi and West Virginia.

These snapshots underscore that 21st-century trade is literally international and intricately integrated. Trying to reconfigure this global trading system, retreat from it or hide behind a wall of protectionist tariffs will not be easy or painless for the United States.

DISASTER Before getting into the benefits of free trade, it’s worth noting that protectionism has deep roots in America. The Tariff Act of 1789 was the first significant bill passed by Congress.  Tariffs were the main revenue source for the federal government throughout the 19th century. As late as 1915, customs duties, or tariffs, represented 30.1 percent of federal revenues.

However, the general trend has been to lower trade barriers. It has been many decades since the world has seen U.S. tariffs of the scale and scope Trump has unleashed.

Critics of Trump’s approach to trade forget that the free-trade consensus began eroding before he took office. In 2008, Obama called NAFTA “an enormous problem,” declared that “NAFTA needs to be amended” and threatened to “opt out.” Both Obama and then-Sen. Hillary Clinton opposed trade deals with South Korea, Colombia and Panama, though the former ultimately signed free-trade agreements (FTAs) with all three as president.

In 2016, Trump labeled NAFTA “a disaster.” He also opposed the Trans-Pacific Partnership (TPP), which originally enfolded the United States and 11 other Pacific Rim nations. “The TPP is a horrible deal,” he said.

In her 2016 presidential campaign, Clinton vowed, “I will stop any trade deal that kills jobs or holds down wages, including the Trans-Pacific Partnership ... I’ll oppose it as president.”

Once in office, Trump withdrew from the TPP, threatened to withdraw from NAFTA, levied tariffs on Canada, Mexico and Europe, and announced plans to add up to $200 billion in tariffs on Chinese imports.

These politicians are responding to what Americans are feeling. In 2008, 58 percent of voters saw global trade as “bad because it has subjected American companies and employees to unfair competition.” By 2016, only 29 percent of Americans said NAFTA had been good for America. Today, 52 percent of Americans support new tariffs on Chinese imports.

There’s an argument to be made for protecting U.S. industries, especially industries connected to national security. “Maintaining the production of American steel is extremely important to our national security and our defense industrial base,” Trump explains.

Adam Smith, the father of free-market economics, would agree. “When some particular sort of industry is necessary for the defense of the country,” he explained, it is appropriate “to lay some burden upon foreign, for the encouragement of domestic industry.”

BARRIERS Even with its periodic protectionist impulses, the United States has generally been more inclined to free trade and open markets than to mercantilism (the pursuit of trade surplus through protectionism) and autarky (the pursuit of economic self-sufficiency).

President Woodrow Wilson argued for “removal, so far as possible, of all economic barriers and the establishment of an equality of trade conditions.”

President Franklin Roosevelt and Winston Churchill’s Atlantic Charter called for “access, on equal terms, to the trade and to the raw materials of the world” and “the fullest collaboration between all nations in the economic field.” If economic nationalism and closed-off markets sowed the seeds of war, they reasoned, then the postwar world would need to be characterized by free trade and a liberal economic system.

After the war, the United States midwifed a free-trade zone in western Europe, transformed Germany and Japan into liberal economies, and constructed an ever-widening network of international trade agreements.

Calling for a “freer system of trade,” President Dwight Eisenhower concluded, “The free world can no longer afford ... arbitrary restraints on trade.”

President John Kennedy proposed the “gradual elimination of tariffs here in the United States and in the Common Market” and argued that “increased imports stimulate our own efforts to increase efficiency.”

Reagan believed that a U.S.-Canada-Mexico trade deal would unleash economic potential beyond which “any of them – strong as they are – could accomplish in the absence of such cooperation.”

No trade deal is perfect. But NAFTA – what Obama called “an enormous problem” – generates total trade flows of $1.2 trillion (up 250 percent since 1993, the year prior to NAFTA). Manufacturing exports to NAFTA partners are up 258 percent from 1993. U.S. exports to Mexico (up 455 percent) and Canada (up 165 percent) have exploded under NAFTA. And its critics forget how intertwined and interdependent North American supply chains now are. Cars built in the Great Lakes region “cross the U.S.-Canada border half a dozen times as they are assembled,” according to the U.S. Chamber of Commerce, while trade with Canada and Mexico supports 14 million American jobs.

Similarly, Oxford Economics concludes that U.S.-China trade supports 2.6 million American jobs – and that if the iPhone were assembled entirely in the United States, it would cost $100 more per unit.

OPTIONS Free trade has expanded where we sell our crops, goods and services – and where we spend our money.

We Americans have the means to purchase lots of stuff. But we want to get the most for our money. That’s where trade comes into play – imports drive down costs for U.S. consumers by expanding purchasing options – and how trade deficits emerge. While voting patterns suggest the American people support protectionism, our buying habits say otherwise. We buy iPhones, laptops and TVs assembled in China; vegetables, beef, petroleum and car parts from Mexico and Canada; machinery and cars from Japan, Korea and Germany; clothing and footwear from Vietnam. The list goes on.

Not coincidentally, the United States runs trade deficits with China, the EU, Japan and Mexico. Of course, what the term “trade deficit” means is that U.S. consumers have chosen to use their money to purchase more stuff from China, Europe, Japan and Mexico than they’ve sold to China, Europe, Japan and Mexico. (We don’t hear about America’s trade surpluses with Australia, Brazil, Canada, Chile and Turkey.) In this system of free exchange, Americans get the stuff they want while our trade partners get the economic resources they want. No one forces either side to engage in this trade of stuff for money.

This is not dissimilar from how a typical household deploys its economic resources: instead of raising livestock and crops, most of us go to the grocery store. Instead of knitting our own clothes and cobbling our own shoes, we order shirts and shoes online. Instead of toiling against weeds, we hire a lawn-care company. Instead of exposing ourselves to pests and poisons, we call an exterminator. Yet we don’t worry about having a trade deficit with Walmart, L.L. Bean, TruGreen or Orkin. As Smith observed, “It is the maxim of every prudent master of a family never to attempt to make at home what it will cost him more to make than to buy.” This principle of free exchange applies to households and nations alike: “What is prudence in the conduct of every private family can scarce be folly in that of a great kingdom.”

There are real reasons to get tough with Beijing – its piecemeal annexation of the South China Sea, industrial-scale cyberespionage, contempt for intellectual property and human rights, onerous entrance costs for access to the Chinese market – but the mere existence of a trade deficit is not one of them.

Moreover, attacking the China trade deficit with tariffs won’t have a significant effect on the structural-institutional-political causes of Beijing’s malign actions – and will likely hurt U.S. consumers and producers more than it hurts China’s state-owned enterprises. It’s akin to a doctor treating your earache by subjecting your spouse to chemotherapy. Not only is it the wrong treatment, it’s given to the wrong patient. “Let’s absolutely take on Chinese bad behavior,” says Sen. Ben Sasse, R-Neb., “but with a plan that punishes them instead of us.”

Since the rest of the world is also alarmed by China’s behavior, it would make sense to create a common front against China by partnering with friends in Europe, the Americas and Asia in using trade as a tool to encourage better behavior in Beijing. Washington’s tariff salvos seem to have done the opposite.

KINDLING Trump argues he’s trying “to bring fairness into trade.” To his credit, he has proposed a “no tariffs, no barriers” G-7. European Commission President Jean-Claude Juncker and Trump have agreed to work toward “zero tariffs” and “zero subsidies on non-auto industrial goods.” And both Mexico and Canada agreed to refurbish – and rename – the NAFTA treaty, which is now called the United States-Mexico-Canada Agreement, or USMCA.

Yet we’re a long way from a brave new world without tariffs. The worry is that Trump’s no-tariffs-or-more-tariffs ultimatum may not only fail to lower foreign tariffs – it could trigger a full-blown trade war.

Ultimately, Americans bear these costs. Reacting to a new 20 percent U.S. tariff, LG raised the price of its washers and dryers by $50. Coca-Cola passed along to consumers increased costs associated with aluminum and steel tariffs.  Soybean prices fell 40 cents a bushel after Beijing unleashed its own volley of tariffs. As the Financial Times reports, that translates into a $12,000 loss for a typical soybean farmer.

Things could get worse. Administration threats to increase tariffs on European cars by 25 percent – which would up the cost of a typical European-built car sold in the United States by $11,700 – drew a warning from the EU that it was prepared to retaliate with $294 billion in tariffs.

“We fool ourselves if we think trade wars can’t happen again,” my Fraser Institute colleague Fred McMahon observes. He explains how the idea behind the 1930 Smoot-Hawley legislation “was to protect U.S. farmers with a higher tariff. But as it moved through Congress, the political game became ‘if you support my tariff, I’ll support yours’ – until 890 tariffs were raised.”

The rest of the world responded in kind, and the result was disastrous. Between 1929 and 1934, world trade fell by 66 percent, U.S. imports from Europe by 70 percent, U.S. exports to Europe by 66.5 percent. This served as dry kindling for the Depression.

“The fallout of a global trade war would be worse today,” McMahon contends. “At the time of Smoot-Hawley, international trade equaled only a few percentage points of GDP; today, U.S. imports and exports equal 30 percent of U.S. GDP.”

Moreover, history suggests the pathway to fair trade is free trade. FTAs have steadily leveled the playing field and made international trade fairer: there were 23 regional trade agreements in 1988; by 2012, there were 233. This proliferation of trade deals whittled the average applied tariff rate from 33.96 percent to 2.88 percent.

If any country could wall itself off from the world and make autarky work, it’s the United States, with its vast agricultural, technological, industrial and natural resources.

However, it wouldn’t work as well for the American people as free trade. Americans are richer and freer to pursue their talents precisely because we trade goods and services around the world. And trade barriers are lower today than they’ve been in centuries precisely because the United States has led the way in promoting “the greatest possible freedom of trade,” in Roosevelt’s words.

Perhaps Trump’s tariffs will succeed at convincing other nations to lower trade barriers. But given the history he’s up against, there’s no guarantee.

Alan W. Dowd is a senior fellow with the Fraser Institute.