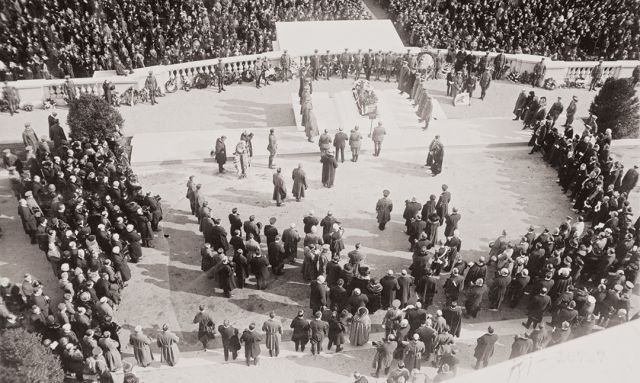 The Tomb of the Unknown Soldier. Library of Congress

No local charters had yet been approved when veterans who gathered at the formative May 8-10, 1919, St. Louis Caucus of The American Legion

determined that posts should not be named for living people. Thus, across the country and around the world, local posts became memorial shrines to those who served, sacrificed and strengthened America through history – from Army Capt. Carter C. Hanner of Stillwater, Okla., who died Oct. 8, 1918, in the Meuse-Argonne, to Illinois National Guard Sgt. Shawna Morrison, who lost her life in a mortar attack in Iraq on Sept. 5, 2004.

Namesakes are enshrined in glass cases, displayed on walls or documented on the Legion’s centennial website (legion.org/centennial), paying homage to those who fell in defense of the nation. Thousands who became post namesakes made the ultimate sacrifice before The American Legion was formed.

The Legion’s vow to “preserve the memories and incidents of our associations in the Great Wars” is illustrated by more than 2,400 memorials uploaded to the Legion’s centennial database since it was introduced in 2016 (legion.org/memorials).

As walls, statues, bridges, gazebos, benches and even stadiums arose throughout the century to honor military sacrifice, the Legion has worked to ensure that no generation forgets the cost of freedom, regardless of war era or location.

The Legion’s legacy of honor and remembrance is immense, with numerous examples.

The Tomb of the Unknown Soldier: American Legion founding leader Hamilton Fish introduced legislation during his first term in Congress to memorialize an unknown fallen U.S. soldier of the Great War. The bill, with backing from the newly formed American Legion, passed to entomb at Arlington National Cemetery one unknown soldier buried in France. On Memorial Day 1921, Sgt. Edward F. Younger, a combat veteran, chose one fallen comrade from four caskets lined up in France. The chosen one was sent to Washington, where on Nov. 11, 1921, surrounded by the Allied generals of the Great War and members of The American Legion, President Warren G. Harding dedicated the Tomb of the Unknown Soldier.

The American Legion has maintained a deep connection with the tomb, calling for and achieving overnight surveillance in 1926 and  24-hour armed guarding in 1937, which continue today by the 3rd U.S. Infantry Regiment, the “Old Guard.” The remains of unknown soldiers from World War II and the Korean War were added in 1958, and were presented the Medal of Honor by President Eisenhower. In 1969, for its 50th anniversary, The American Legion raised nearly $200,000 as a gift to the nation to install lighting at the tomb. President Ronald Reagan served as next of kin to the Vietnam War unknown, placed in the tomb in 1984, who was later identified through DNA testing, removed and returned to his family.

The Liberty Memorial: During its third national convention on Nov. 1, 1921, The American Legion helped dedicate the towering Liberty Memorial in Kansas City. The convention was an early stop in the Allied Victory Tour across the United States with Marshal Ferdinand Foch of France, Gens. John Pershing of the United States and Armando Diaz of Italy, and Adm. David Beatty of Great Britain. President Calvin Coolidge attended the ceremony, during which American Legion Distinguished Service Medals were presented to Foch, Diaz, Beatty, Lt. Gen. Baron Jacques of Belgium and M. Charles Bertrand of France, president of the Inter-Allied Veterans Association.

The Ossuary at Verdun: “The Ossuary of Verdun will in truth be a lighthouse for the world. It will be looked upon as one of the world’s most noble structures, noble in the associations it recalls and noble in its own architectural grandeur.”

American Legion National Commander J.R. McQuigg, in a June 18, 1926, American Legion Weekly resolution-driven appeal to posts everywhere to contribute funds for the memorial in France and another in Liege, Belgium, to commemorate Allied sacrifices necessary to regain peace in World War I.

Tomb of The American Legion, Cuba: A tomb/memorial at the Colon Cemetery in Havana, Cuba, honors U.S. Civil War, Spanish-American and World War I veterans. The memorial has an engraved American Legion emblem and appears well-maintained, 60 years after the communist revolution and 58 years after the Castro regime executed the commander of Havana American Legion Post 1 after a show trial. The tomb was dedicated in 1926 by Post 1, joined by the Grand Army of the Republic, United Confederate Veterans and United Spanish War Veterans.

Korean War Veterans Memorial: The American Legion raised more than $575,000 in cash donations and was the largest marketer of U.S. Mint commemorative coins to support construction of the Korean War Veterans Memorial in Washington, D.C. Legionnaires from across the country gathered at the National Mall on July 27, 1995, led by National Commander William Detweiler of Louisiana, for the dedication, the centerpiece of a four-day event to recognize veterans who served and sacrificed in the war.

Lafayette Escadrille Memorial: In October 2000, The American Legion Overseas Graves Decoration Trust Fund was authorized to allocate $25,000 to help repair and restore the Lafayette Escadrille Memorial near Paris, built in 1928. A massive memorial crypt containing sarcophagi of 68 American aviators who died fighting with the French as part of the unique squadron, the site was restored in 2015 and 2016. A year later, its ownership was transferred to the American Battle Monuments Commission.

National World War I Memorial: In 2017, The American Legion National Executive Committee pledged $300,000 to help fund construction of the National World War I Memorial at Pershing Park in Washington, D.C. The NEC had previously approved and allocated funds to the U.S. World War One Centennial Commission to produce educational materials about the war and to support a special event in Kansas City commemorating the 100th anniversary of U.S. entry.

POW/MIA Remembrance: Resolution 288, passed at the 67th American Legion National Convention Aug. 27, 1985, calls for designation of a POW/MIA Empty Chair at official meetings of The American Legion, as a physical symbol of the thousands of American POW/MIAs still unaccounted for. The message, recited prayerfully, is as follows:

This table, set for one, is small, symbolizing the frailty of one prisoner, alone against his or her suppressors. The tablecloth is white, symbolic of the purity of their intentions to respond to their country’s call to arms.

The single red rose in the vase signifies the blood they may have shed in sacrifice to ensure the freedom of our beloved United States of America. This rose also reminds us of the family and friends of our missing comrades who keep the faith, while awaiting their return.

The yellow ribbon on the vase represents the yellow ribbons worn on the lapels of the thousands who demand, with unyielding determination, a proper accounting of our comrades who are not among us tonight.

The glass is inverted. They cannot toast with us this night.

The chair is empty. They are not here.

The candle is reminiscent of the light of hope which lives in our hearts to illuminate their way home, away from their captors, to the open arms of a grateful nation. Let us pray to the supreme commander that all of our comrades will soon be back within our ranks.

Let us remember and never forget their sacrifices.