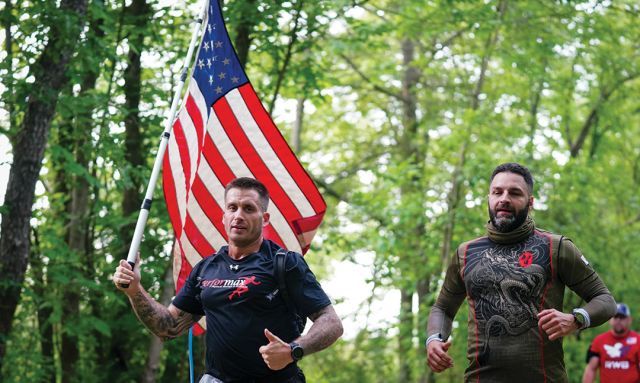 Billy Richards won’t quit. It’s a trait that served him well as a Marine, and later when he enlisted in the Army.

He is driven to push himself to limits few people comprehend, much less experience. In the service, Richards pushed himself to reach the gold standard for fitness tests. He never considered the baseline passing requirement.

Now Richards, 37, is on a mission to break the world record for most 100-mile ultra marathon races in a calendar year. He’s not out to simply run a 100-mile race, or even to do one a month. He’s aiming for 43, ahead of the current record of 41.

“I started carrying the flag as a patriotic gesture for the Fourth of July,” he recalls. “It eventually grew into something bigger. People were inspired by it. It motivated them, made them feel patriotic. It became a tradition. I can’t do a race without it.”

UNABASHED PATRIOTISM Richards actively supports today’s servicemembers, veterans and law-enforcement officers. As a member of American Legion Post 1528 in Depew, N.Y., he sees the value in camaraderie. “Once you’re in the civilian world, you’re on your own. There’s nobody telling you how to do anything. You have to go from being part of a machine to being your own machine.” Depew Post 1528 in Depew,

Depew Post 1528 in Depew, NYHe joined the Marines in October 1999, and was deployed twice to the Mediterranean during his four years. He missed the military lifestyle, so he joined the Army in 2009. He served for a few more years and finished up in the 82nd Airborne.

After he left the service, Richards entered fitness competitions, gravitating toward obstacle-course events like Tough Mudders, Spartan Races and anything else that would challenge him. To date, he has competed in nearly 500 athletic events. At nearly all of them, he’s carried Old Glory.

In 2016, amid a string of high-profile shootings involving police, Richards launched his public display of patriotism. He traveled to 39 locations, including Baltimore, St. Louis and Baton Rouge, La., and ran around the community, proudly waving the Stars and Stripes. Upon finishing, he presented the flag and a handwritten thank-you note to the local police precinct.

“I had a significant following on the internet, so I decided to show a more positive side of things,” Richards says. “My theory was that the community actually supported the police department, the exact opposite of what social media was portraying. I wanted people to get a sense of patriotism, a belief in the country, because I think that’s missing nowadays.”

INJURIES AND INSPIRATION In 2016, Richards started piling on the races. An ultra running race. An obstacle-course event. Every weekend was packed with challenges. “I couldn’t believe what I was doing,” he says. “I just kept pulling it off.”

Like other athletes who push their bodies to extremes, Richards deals with his share of injuries. Three years ago, he ruptured a biceps tendon during a Tough Mudder, the day after he ran a 15-hour, 100-kilometer race.

Around mile 9 of the Tough Mudder, Richards attempted an obstacle called the Funky Monkey while carrying his 45-pound pack. The obstacle resembles monkey bars that lead to an arm swing and a long pole.

“I made it all the way to the end of the pole, and as I’m taking my left hand off the bar to get it on the final chain, I feel three pops in my bicep,” he recalls. “Bicep tendon rips right off the bone. I still finished the obstacle, though. I hung on. I just couldn’t move my arm.”

A race medic allowed Richards to finish the final 1.5 miles, but told him not to do any more obstacles. Two days later, he had bicep surgery.

That didn’t stop Richards. He competed in a couple of races the following weekend. After the second race, a five-miler, Richards was at the finish line – wearing a cast, holding the U.S. flag  – when a woman approached him. “She says, ‘Because of you, I no longer know the meaning of the words ‘I can’t.’ That played a major role and sparked a fire in me.”

Three weeks later he ran in an annual four-mile race honoring Navy Lt. Michael Murphy, who posthumously received the Medal of Honor for his actions during Operation Red Wing in Afghanistan.

The four miles wasn’t enough for Richards, though. He started the night before, running 50 miles from Spanish Harlem to the start line. “My philosophy was, my right arm is down but I still have a left arm to carry the flag and two legs to run with.”

‘KEEPING HIM IN THE GAME’ During his 100-mile quest, while running at the Peak Ultra in Vermont, Richards injured his shin. The 10-mile loop course on rugged terrain includes a 2.4-mile uphill climb with additional smaller descents and ascents. “There were two very steep downgrades, almost 40 to 50 percent,” Richards says. “I was constantly having to throw on the brakes while going downhill, and that impact is all on the shin.”

After every event, physical therapists help Richards recover and prepare for the next adventure.

“We don’t super-condone 100-mile races every weekend,” says Armand Diesso, owner of Performax. “However, it’s our job to keep him doing it because we’re not looking at an ordinary person. We’re looking at somebody trying to break a world record.”

Diesso and his team work on Richards for an hour twice a week – his back, his shoulders and his legs – using a combination of stretching, blading, cupping and kinesiology tape. On race days they are anxious for updates.

“We’re so invested on a personal level,” Diesso says. “Billy’s a friend, almost family now. It’s tough because clearly this is not good for the human body. It’s something that we don’t really recommend people doing. We’re keeping him in the game as of right now. He does so much for the police and vets. It’s something we’re happy to be a part of as well.”

DOWN BUT NOT OUT The shin injury forced Richards out of the Keys Ultra 100-miler in Florida in May, after finishing 65 miles. He skipped a planned race the following weekend, which meant his window for breaking the record has narrowed. Next on the calendar was the Eagle Up Ultra, a 24-hour event in eastern Ohio.

Richards tends to focus solely on the mission at hand. “I just kinda do it. It’s not really something I get that nervous about. It’s such a long event.”

Eagle Up was different. Not only was the ultra a significant test for his shin, but the 24-hour cutoff posed a challenge. Richards doesn’t try to go fast at these events. His goal is to simply finish. His strategy for Eagle Up was to finish 50 miles in about 10 hours, then do more walking in the second half. After all, he had another 100-miler the following weekend.

Richards met his goal for the halfway point. On his final loop, he walked four of the final five miles, averaging an 18-minute pace, finishing with 10 minutes to spare.

“I’m a little surprised I pulled it off,” he said after the event. “I was nervous about the shin.”

INSPIRING OTHERS After recovering from races, Richards climbs into his car or heads to the airport to fly home to Long Island. Working full time as a personal trainer at Gold’s Gym in Islip, he has a packed schedule, seeing clients starting at 5 a.m. Monday and going through Friday morning. Then Richards heads off to another race weekend – but not before he’s inspired, pushed and encouraged his clientele.

Cody Milne is among the athletes Richards trains. He remembers when they met at a Spartan Sprint race in New York.

“I just crossed the finish line, turn around and see this big guy,” Milne says. “He’s got a giant backpack on. He’s holding the American flag real high, and he runs and he jumps right over the fire.”

Milne immediately signed up to be trained by Richards, who he calls “superhuman.”

At that time, Milne was about 185 pounds with 25 percent body fat. Now, two years later, he has muscular definition, weighs 170 pounds and has 10 percent body fat. “It’s awesome. I feel great,” says Milne, 30. “I’m in better shape than I was when I was 18 and played lacrosse year-round.”

Richards has also convinced Milne that he is capable of more than he ever thought possible. For example, he completed the World’s Toughest Mudder, a 24-hour obstacle course event near Las Vegas. Before the race, Milne’s longest event was 15 miles. He finished with 65.

“He’s very inspiring,” Milne says of Richards. “We went through a lot of different training and talking about how to get through the night. You just have to keep focusing on what’s next. You can’t focus on the big picture. That helped tremendously.

“In a 24-hour endurance race, you go into some dark places. Sometimes my headlamp literally didn’t work, and it was pitch-black in the desert. A lot of what Billy said helped me get through it.”

The inspiration goes both ways.

“A lot of people draw strength from what I do, but they are also a source of motivation,” Richards says. “I feel that if I quit, I let them down. And since I carry the flag, I feel that if I lose, America loses.”