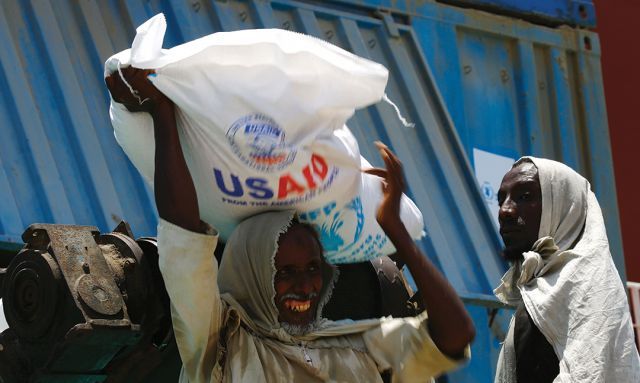 Of all the line items in the federal budget, perhaps none is more vilified and less appreciated than foreign aid. It has no well-heeled domestic interest group to defend it, it seldom yields immediate benefits, and it takes finite federal resources away from Americans and diverts them overseas. So it’s no surprise that foreign aid has long been a political punching bag.

What may be a surprise is that many military leaders view foreign aid as key to promoting U.S. interests, keeping the peace and preserving some semblance of international order.

HOPE We tend to think of foreign aid as a more recent phenomenon – something spawned by the exigencies of the early Cold War years.

Yet concerted efforts to distribute foreign aid by Americans date at least to 1820, when Americans provided aid to support Greek independence and care for Greek orphans. In 1832, when the starving people of the Cape Verde Islands rowed out to a ship hoping to buy food, “they were astonished to learn that the vessel had been sent by the United States for the express purpose of relieving their necessities,” the late Robert Bremner detailed in “American Philanthropy.” During the Irish famine in the 1840s, the contributions of Massachusetts alone “required two sloops of war, four merchant ships and two steamers.”

During World War I, Americans formed the Commission for Relief in Belgium, which distributed $1 billion in food and clothing to refugees. After the war, the American Relief Administration distributed food to war-ravaged Europe. When earthquakes devastated Japan in 1923, President Calvin Coolidge dispatched the U.S. Pacific Fleet to deliver relief. In 1943, America helped create the U.N. Relief and Rehabilitation Administration, which distributed $4 billion in food and medicine to refugees.

After World War II, Secretary of State George Marshall unveiled a $13 billion aid and relief program to help Europe rebuild. Along with the American fighting man’s efforts on the battlefield, the Marshall Plan saved Western civilization.

Halfway around the world, Gen. Douglas MacArthur diverted 800,000 tons of U.S. military supplies to feed Japan. He then persuaded Washington to earmark $250 million for food and medicine – “an amount exceeding the combined budgets of the U.S. Departments of Commerce, Justice and Labor,” a RAND report observes.

In 1947, as he urged Congress to send hundreds of millions in aid to Greece and Turkey, President Harry Truman warned, “The seeds of totalitarian regimes are nurtured by misery and want. They spread and grow in the evil soil of poverty and strife. They reach their full growth when the hope of a people for a better life has died. We must keep that hope alive.”

Truman, Marshall and MacArthur recognized that foreign aid was an essential tool of foreign policy and a textbook example of enlightened self-interest. To prevent “misery ... want ... poverty and strife” from nurturing the seeds of totalitarianism and other threats, Truman sent unprecedented amounts of aid to Europe, rebuilt Japan and Germany, and defeated Stalin’s blockade of West Berlin with an airlift that delivered 2.3 million tons of assistance – the first of 450 U.S. humanitarian airlifts during the Cold War.

MERCY During the Cold War, Americans poured $2 trillion in economic assistance and aid into some of the poorest, hungriest corners of the globe. Many billions more have been added to the ledger since the fall of the Berlin Wall.

U.S. foreign-aid spending is both more and less than what its critics say it is. Let’s start with the less side of the ledger. Foreign aid amounts to far less than what most Americans think we spend on it. In a 2015 survey, for instance, the average respondent estimated that 26 percent of federal spending went toward assisting other countries. That would equal more than $1 trillion in foreign aid annually.

Americans actually spend less than 1 percent of the budget on foreign aid annually. But that doesn’t make us stingy, which brings us to the more side of the ledger. Owing to the sheer size of America’s GDP, that fraction of a percent amounts to more ODA than any other nation distributes. A Council on Foreign Relations analysis reveals that the United States sends aid to more than 200 countries – most via the U.S. Agency for International Development (USAID).

USAID reports that its programs “helped to vaccinate 500 million children and save 7 million lives since 2001.” In the past decade, it delivered safe drinking water, sanitation and sustainable agriculture to more than 15 million people.

Yet there’s much more. As the Index of Global Philanthropy and Remittances details, “Government aid is no longer the primary measure of a country’s generosity. U.S. private philanthropy, remittances from migrants living in the United States to their home countries and private capital flows each exceed U.S. ODA.” That $34.1 billion figure doesn’t capture charitable giving overseas ($43.9 billion), money transfers from immigrants back to their birthplaces ($108.7 billion) and private investment ($179.3 billion). Added up, a far larger picture of U.S. overseas aid emerges: $366 billion annually.

Even that figure is incomplete. Consider the uncounted billions America spends deploying military assets – troops trained to rescue, repair and rebuild; ships with desalination equipment and triage centers; transport helicopters and cargo planes that deliver supplies and evacuate victims – to respond to disasters in Kosovo and Kurdistan, Sinjar and Somalia, Bosnia and Bangladesh, West Berlin and East Timor. The list – like the needs of the world’s suffering – is endless.

A recent example of this hidden aid is America’s response to the 2014 Ebola outbreak. U.S. Africa Command stood up a base of operations in Liberia to coordinate the efforts of NGOs and government agencies. The 101st Airborne and other Army units provided security and logistics solutions, Navy Seabees erected treatment facilities, Air Force planes transported thousands of tons of people and cargo, and Marines provided enabling assistance in Senegal. No other nation could have carried out such a feat, and no nation was billed for what America’s military did.

Other examples of U.S. foreign-aid dollars at work are the President’s Emergency Plan for AIDS Relief (PEPFAR) and the President’s Malaria Initiative (PMI), both launched by President George W. Bush.

In 2003, 30 million Africans suffered with AIDS/HIV, including 3 million children. Yet only 50,000 Africans were receiving needed treatment. In response, Bush proposed “a work of mercy beyond all current international efforts to help the people of Africa.” Today, PEPFAR supports life-saving treatment for 11.5 million people, has prevented 2 million infants from being born with HIV, and provides critical care for 6.2 million orphans.

Dr. Anthony Fauci, director of the National Institutes of Allergy and Infectious Disease, says PEPFAR has saved up to 15 million lives thus far.

Launched in 2005, PMI helps protect 30 million people from Africa’s deadliest killer – mosquitoes – by distributing bed nets and medicine. Thanks to PMI, 7 million malaria deaths have been averted, malaria mortality is down by 54 percent, and there has been a 30 percent decline in malaria cases. This is not the handiwork of a stingy nation.

PEACE These foreign aid programs are not just “works of mercy,” to borrow Bush’s phrase. They serve U.S. interests.

Vin Gupta, an officer in the Air Force Medical Corps and professor at the Institute for Health Metrics and Evaluation, and Vanessa Kerry of the Harvard Medical School found that between 2005 and 2014, countries that received the highest levels of per-capita health aid “enjoyed near-immediate results in terms of improved state-stability metrics, including higher quality of governance, lower degrees of corruption, enhanced social cohesion, and a more vibrant civil society.” Health-related development aid, they conclude, “not only saves lives but also appears to facilitate the rise of more peaceful societies.”

More peaceful societies are more stable, and peace and stability are in the national interest. In this way, effective foreign aid programs “can serve both strategic and humanitarian purposes,” Gupta and Kerry conclude.

The Marshall Plan prevented western Europe from sliding into the prison yard of communism, created a market for U.S. goods and services, and transformed Europe from an incubator of world wars into a partnership of peace and prosperity.

The Berlin Airlift saved 2 million people from starvation, rescued a city from tyranny, and highlighted the stark differences between the United States and the Soviet Union.

Those 450 Cold War-era airlifts ensured that foreign governments would “be receptive to Americans politically, economically and militarily,” an Air Force analysis explains.

America’s response to the Ebola outbreak saved thousands in western Africa, prevented the killer virus from spreading into Europe and the Americas, and staved off a global panic.

Real schools with textbooks and teachers are an antidote to lies spewed by extremist madrassas. Likewise, providing medicine and clean water to forgotten corners of Africa serves as an inoculation against jihadism. “Societies mired in disease breed hopelessness and despair,” Bush recently observed, in an echo of Truman, “leaving people ripe for recruitment by extremists.”

HELP Yet recent decades have seen a downward trend in U.S. foreign-aid spending. Measured in constant dollars as a share of GDP, non-military aid is lower today than it was a decade ago – and far below the ’50s. But the end of the Cold War didn’t end misery, want, poverty and strife – to use Truman’s words – or the threats to U.S. interests they so often spawn.

President Dwight Eisenhower, the no-nonsense general, saw a connection between foreign aid and U.S. interests. Defending a massive aid program that enfolded security assistance, economic development and global health, Eisenhower called foreign aid “an investment in our present safety, in our future strength and in the growth of freedom throughout the world.”

Fast-forward to the 21st century, and today’s military leaders are making the same argument.

In 2013, responding to a question about State Department foreign-aid programs, then-Gen. James Mattis warned a Senate committee, “If you don’t fund the State Department fully, then I need to buy more ammunition.”

A group of 121 retired generals and admirals recently signed an open letter arguing that USAID and other development programs “are critical to preventing conflict and reducing the need to put our men and women in uniform in harm’s way.”

Two signatories of that letter, Adm. James Stavridis and Gen. Anthony Zinni, add that foreign aid “is not a reward for good behavior. It is a critical tool to advance American interests around the world and address the drivers of conflict and instability.”

The generals and admirals know something that few Americans consider: the world America began building after World War II – a world in which free government, free markets, free trade and free nations can thrive – didn’t emerge by accident and doesn’t endure by magic. It depends on those blessed to live in relative peace and prosperity using their wealth to deter aggression, to enforce international norms of behavior and, yes, to offer help and hope to those in need.