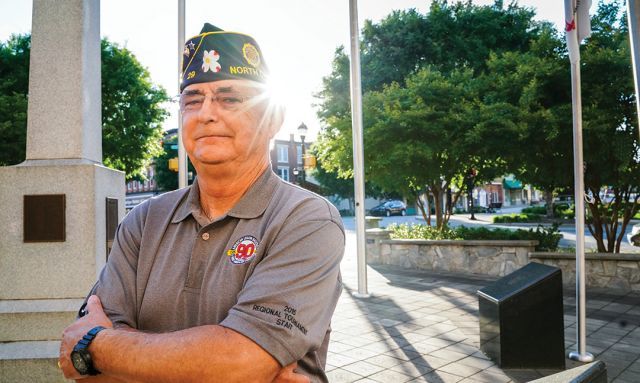 After returning from Vietnam in 1970 and hanging up his Marine dress blues, Oxford enjoyed Saturday night dances and parties at a Legion hall in Hickory, N.C. In time, though – busy building a family and a career – he let his membership lapse.

Fast forward 16 years. At a Legion Baseball game in his hometown of Lenoir, Oxford ran into an old friend. They’d played sports together as boys. Say, would he be interested in helping out with the local post’s Legion Baseball program?

He went to his first meeting at Dysart-Kendall Post 29 knowing next to nothing about it, and walked out as commander. “It was all downhill from there,” he says, joking.

Quite the opposite, actually. Hooked on the Legion’s commitment to veterans and youth, Oxford has spent 33 years volunteering at every level of the organization, from post adjutant to district and department commander to chairing the National Legislative Commission.

“My love for the Legion goes back to the fact that we serve America’s veterans,” he says. “Our country has an obligation to provide for them when they come home. We have to let them know we respect and honor their sacrifices. We cannot let them down.”

YELLOW FOOTPRINTS Oxford’s family has lived in and around Lenoir for generations. They came from England in the late 1700s, landing in the Hampton Roads area and fanning out from there. His ancestors include a fearless circuit preacher (known for placing two pistols on the pulpit and saying, “I’m preachin’ and you’re gonna listen”) and a great-grandfather who at 14 helped amputate limbs of wounded Civil War soldiers (rejected from serving because of his age, he volunteered as a surgeon’s assistant).

As for Oxford, he grew up in the countryside outside Lenoir, one of seven children. His father worked in a furniture factory, his mother in a cotton mill. Few in Oxford’s family had served in the military, but he knew early on that would be his path. When a Marine Corps recruiter knocked on their door, “all he had to do was reel me in,” he says. “I was on board. One of the smartest things I’ve ever done.”

He remembers the trip to basic training, with “the bus stopping at every wide place in the road to pick up guys heading to Parris Island. We arrived after dark and pulled up in front of the receiving station, and the biggest, meanest, loudest, gruffest man you ever heard jumped on and started barking commands.”

Etched in Oxford’s memory are the famous yellow footprints, painted on the pavement to help recruits learn how to stand in formation. Eyes wide, hanging on the drill instructor’s every word, Oxford knew his life was about to change.

“Had I not been able to make that transition from civilian to Marine, I would not be who I am today,” he says.

From there, Oxford went to Camp Lejeune, then Naval Air Station Memphis to learn aviation electronics, Cherry Point, N.C., and finally Chu Lai, Vietnam, where he joined VMA(AW)-533, an A-6 Intruder squadron.

There, Oxford worked the night shift repairing planes, from 6 p.m. to 6 a.m. “I did my job, went home, slept and came back the next day,” he says. “I thought everybody was in the jungle, fighting the Viet Cong. It really was not what I expected.”

When Oxford’s mother died unexpectedly, he returned to the United States. Not too long after that, he and his wife, Frances, welcomed their first child and he left the service. But Oxford’s time in uniform was just beginning. He followed his father-in-law and two brothers-in-law into the North Carolina National Guard, where he received a commission in 1973. He later transferred to the Army Reserve, retiring as a colonel in 2001.

TEAM EFFORT Oxford’s military experience led to work in the electrical field, and eventually a position as a safety and environmental manager. Retired from that too, now, his time fully belongs to his family and The American Legion.

The Oxfords live near their children, Charlie and Jackie, and their families. Over the years, they’ve made it a priority to be on the sidelines cheering when one of their four grandsons – Isiah, Micah, Jaggar and Dawson – has played a sport.

“Soccer, football, basketball, golf – whatever it was, he’d say, ‘Go for it, put everything you have into it,’” Isiah says of his grandfather. “That’s how he is with everything he does.”

Charlie was in high school when Oxford attended his first Legion Baseball game and took on the role of announcer. His dad told him it was another way for him to serve, even if he wasn’t in uniform.

Oxford has the same perspective about his more recent volunteer work at a local hospice facility, where he presents flags to veterans’ families and recites the poem “In Flanders Field,” which he memorized in 10th grade.

“He’s a soldier – always has been, always will be,” Charlie says. “I’ve never seen him touch anything he didn’t do 110 percent. He’ll take it to the max and then some.”

Though he’s on the road a lot more lately, Oxford remains a pillar at Post 29, where members eagerly supported his campaign for national commander.

“It’s an honor for him and an honor for us,” says Wayne Mihelich, a retired Navy command master chief and 15-year post member. “He’s here to help veterans, and he’s very active in our programs for children, from Legion Baseball to the Navy JROTC. He’s not one who will say ‘I’ll help’ and never show up. If he says he’s going to do something, he’ll do it.”

Oxford is a big proponent of what he calls the “building blocks” of a strong American Legion: veterans services, troop support, and youth programs such as Boys State, Junior Shooting Sports and Oratorical. “We’ve got to have the people, though,” he says. “They’re the concrete holding the blocks together. We need to make sure our membership is growing and not stagnant. We need to renew, reinvigorate, and get that fire in our belly again.

“We should be proud of who we are and what we’ve become,” he says. “It’s time, though, to look forward to The American Legion’s next 100 years. Everything we do today and everything we do tomorrow builds a foundation for the future.”