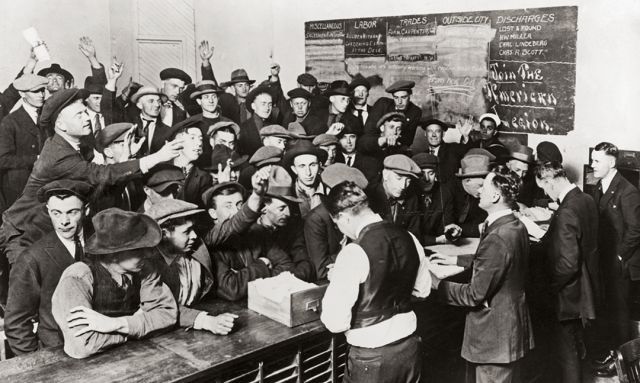 In the aftermath of the Revolutionary War, Daniel Shays was the namesake of a violent rebellion involving thousands of veterans who had fought for independence and came home to find their farms in foreclosure. Taxes had accrued. Bank debts had mounted. They received little or no pay for their time in service. Efforts by the veterans to find peaceful solutions through the courts were unsuccessful. Shays was a combat captain who had fought at Bunker Hill, Saratoga, Lexington and Concord, and he was one among many across New England who would launch the ultimately ill-fated uprising.

Some 4,000 farmer-veterans found themselves in a sprawling military conflict against the country they had sworn not only to defend, but to help invent. Six of Shays’ rebels were killed by state militia, two were hanged, and many others were arrested. Three government soldiers who had been given authority to shoot on sight also died fighting in Shays’ Rebellion. Most of the veterans, including Shays, were pardoned a year after the rebellion was put down, but their message resonated in Independence Hall, as the U.S. Constitution was being drafted, and in decades to come.

The economic treatment of veterans after military service had not been a success story of early America. Policies and programs of the 19th century did little to improve the situation. And so, the newborn American Legion of the 20th century made a top priority of helping veterans find rewarding civilian careers as employees, farmers or entrepreneurs, with preference in pursuit of government jobs and civil service.

“In my city we have already said, ‘Look here, man, you’d better post every job that is open, and post it in the place where returned soldiers get employment,’” Chaplain John Inzer of Alabama told his fellow American Legion founders at the May 9, 1919, session of the St. Louis Caucus where much of the organization’s foundation was poured. “And they have gotten down to that. We want to talk about that today and get down to business – the business of getting jobs for our men.”

A resolution at the St. Louis Caucus established a philosophical direction that would drive legislation, federal policy, public opinion and American Legion ideology for the future. The resolution contained three key prongs:

The American Legion worked with industry, both local and national, to get veterans into careers that would make the most of their military training and experience.

The Great Depression triggered the violent 1932 Bonus March in Washington, D.C., where some 17,000 destitute veterans massed to demand early payment of promised adjusted compensation for time spent at war. Bonds for adjusted compensation were not set to mature until 1945, and The American Legion was divided on the issue until the 16th National Convention in 1934, which put the organization’s growing might behind immediate payment. By summoning the Army to drive bonus marchers out of Washington, Herbert Hoover put his presidency on the line, which Franklin D. Roosevelt seized the following year. It was, in a way, another Shays’ Rebellion.

A repeat Bonus March got started in 1933 but fizzled after new first lady Eleanor Roosevelt met with the first wave of protesters. Her solution: ease the burden of getting jobs for veterans in the Civilian Conservation Corps, which built thousands of roads, bridges and dams during the Depression.

The American Legion, backed by the 1934 resolution, continued fighting for early payment of the bonds and drafted legislation to that effect, which was passed in January 1936, immediately vetoed and then overridden. By April that year, nearly 3 million veterans had applied for newly authorized early compensation.

During the 1930s, The American Legion worked with Congress to establish job-counseling and placement services for veterans as a permanent government responsibility. The Wagner-Peyser Act of 1933 created the Veterans Employment Service, which The American Legion strongly supported.

World War II threatened to have an even greater effect on newly discharged veterans. By 1943, some 75,000 GIs were being medically discharged per month. They came home to scant support from a government deep in a two-front world war. American Legion posts, churches, families and local charities typically absorbed disabled veterans as they waited for any sign of support, including disability compensation.

Out of that reality came the Servicemen’s Readjustment Act of 1944 (the GI Bill), which aimed to help disabled veterans receive training and education for new careers. Free college for all qualified veterans launched millions of careers after the war, but the bill also made low-interest farm and business loans available to hundreds of thousands. World War II veterans who used the GI Bill transformed the U.S. economy in the second half of the 20th century and ignited decades of prosperity, giving birth to the “great American dream.”

Two weeks after the GI Bill was signed by President Roosevelt, The American Legion notched another legislative victory when the Veterans Preference Hiring Act was passed, giving veterans points advantages when applying for U.S. government jobs.

The GI Bill’s success proved what can happen when economic support is an integral feature of the readjustment process. As new GI Bills were drafted and passed, veterans not only proved their value in the civilian economy, but public perception began to change.

No longer the disgruntled and broke farmer rebels of Shays’ time or the marchers driven out of Washington by the Army, veterans have since become sought-after targets of personnel recruitment by most major companies who appreciate their teamwork, discipline and mission awareness.

Early in the post-9/11 era, veteran unemployment spiked to nearly 1 million. The American Legion, by that time, had allied with other organizations, including the U.S. Chamber of Commerce, to conduct career events across the nation for veterans and their families. Adding in job fairs at local posts and state American Legion departments, the organization had a hand in nearly 1,200 career events a year. Since then, veteran unemployment has fallen to about the same rate as the non-veteran workforce, or lower in some areas.

The American Legion also has worked for decades to improve transferability of military training time into credits toward licenses and credentials in specialized civilian career fields.

“Civilian licensing agencies must recognize military training, education and experience when a veteran transitions to the civilian workforce,” then-American Legion National Commander Fang A. Wong told Congress in 2011. “A soldier who drives a truck in a convoy through hazardous routes in Iraq can drive a truck to get eggs to market on time in the American Midwest. A Navy corpsman who saved Marines on the battlefields of Afghanistan has the skills to render emergency aid as an EMT back home. Yet the education, training and experience garnered from military service is not recognized by civilian licensing and certification agencies.”

Ten months after that testimony, President Barack Obama signed the Veterans Skills to Jobs Act that took into account military training in applications for federal employment in fields requiring certification or licensing. The American Legion continues to work for adoption by states and private industry. It also continues to conduct hundreds of job fairs and business workshops throughout the country each year.

As The American Legion enters its second century of support for career-seeking veterans, many issues still exist on the policy and legislation fronts, but the organization continues to work primarily face-to-face, veteran-to-veteran to prevent anything resembling the uprisings of 1786 and 1932 from happening again.