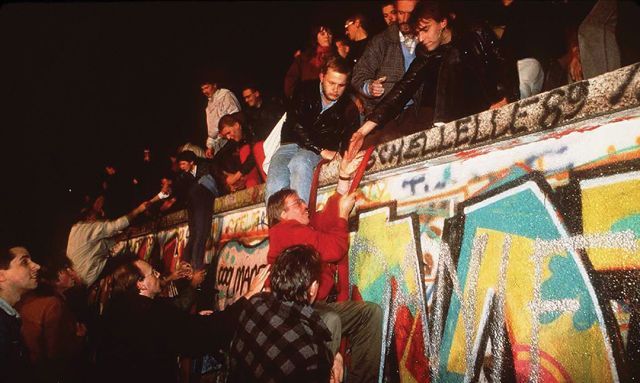 In August 1961, as they unveiled their handiwork to the world, Walter Ulbricht and his henchmen in the German Democratic Republic (GDR) called it an “anti-fascist protective barrier.” Soviet Premier Nikita Khrushchev said it was his “iron ring around Berlin.” For Willy Brandt, West Berlin’s mayor, it was a “wall of shame.”

President John Kennedy called it “an offense against humanity.” President Ronald Reagan described it as “a scar ... a gash of barbed wire, concrete, dog runs and guard towers.”

In January 1989, the GDR’s Erich Honecker boasted it “will stand in 50, even 100 years.” Ten months later, the Berlin Wall was part of history; within a year, so was the GDR.

Germany and the world have experienced profound changes in the intervening decades.

CONSTRUCTION The Wall was built – unlike any other border-barrier in history – to prevent people from leaving their own country. Between 1945 and 1961, 4 million East Germans fled to the West. By July 1961, 1,000 people per day were leaving East Germany via Berlin.

Khrushchev and Ulbricht agreed that something had to be done to stop the hemorrhaging. And so, under the cover of darkness on Aug. 12-13, 1961, they ordered 32,000 troops to begin walling off West Berlin.

The rulers of the communist bloc were satisfied with the solution, since it ended the embarrassing exodus of humanity from Eastern Europe. Even some in the West were relieved. The reason: The Cold War had many fronts, but none invited a direct U.S.-Soviet confrontation like Berlin.

Moscow, in a sense, made the Cold War official by blockading West Berlin and trying to bully America out of eastern Germany. Washington responded with the Berlin Airlift, which rescued a city from starvation and held back the spread of communism.

In the decades that followed, a string of crises made Berlin a symbol of the Cold War and a flashpoint for World War III. The blockade, the airlift and the Wall highlighted the stark differences separating America and the Soviet Union.

COLLAPSE Sealed behind the Iron Curtain, East Germany limped through the Cold War while West Germany blossomed into a global economic powerhouse. Then, someone somewhere inside the GDR’s vast bureaucracy had an idea: turn the natural human desire to be free into a revenue stream. By 1987, West Germany had paid East Germany $1 billion to ransom 50,000 East German prisoners and dissidents. The grotesqueness of this system was lost on Khrushchev and Brezhnev, Ulbricht and Honecker, who promised a “workers’ paradise” but delivered a continent-sized prison yard.

“Democracy is not perfect,” Kennedy observed, “but we have never had to put a wall up to keep our people in.”

Estimates of the number of people who died trying to get past, over or under the Wall range from 136 to 327. All those deaths were tragic, but some are especially poignant: a man dying from a heart attack after being searched because he strayed too close to the Wall; a 5-year-old drowning in the border canal trying to retrieve a soccer ball; two lovers committing suicide after they were unable to steal a plane to carry them to freedom; an infant suffocating in a suitcase as his family fled the East.

In 1989, as the “Velvet Revolution” swept through Eastern Europe, some Warsaw Pact countries began allowing East German “vacationers” to travel through their territory and on to freedom – never to return. In one period spanning less than a week, 70,000 people fled East Germany.

Again, an exodus had created an existential crisis for the GDR. On Nov. 9, 1989, it unveiled a plan to address the crisis. Written in the dense bureaucratese perfected by communist regimes, the plan outlined “temporary transition regulations for travel abroad.” The GDR’s intent was to promulgate a new visa-application process – not to open the border. But when GDR spokesman Gunter Schabowski read the new regulations to reporters, he seemed to say there would be expedited authorizations and immediate issuance of visas.

As historian Frederick Taylor recalls, “An Italian newspaperman asked Schabowski if this was some kind of mistake.” Another Western journalist asked “exactly when this regulation came into effect.” Schabowski nervously shuffled through his notes and answered, “So far as I know, that is, uh, immediate, without delay.”

It was oddly fitting that the communist system’s centralized bureaucracy – which deemed itself capable of controlling every aspect of life – brought down the Wall by mistake.

CONSEQUENCE With the Wall torn down and communism in full retreat, East Germany’s 16 million people were finally free – free to travel, free to choose their leaders, free to speak out against the state, free to worship God or not, free to use their talents in commerce and trade, free from their neighbor-informants and the Stasi and the Red Army, free to reunite with West Germany.

Yet freedom always has a price.

By 2018, Germany had transferred $2 trillion into the former East Germany, as Deutsche Welle details. Yet per-capita GDP in eastern Germany “still lags the West by 27 percent, and the unemployment rate, at 8.5 percent, is above the national average of 5.7 percent.” Wages in eastern Germany are two-thirds the wages in western Germany. Real estate in the East is worth half what it is in the West.

The consequences of Germany’s reunification weren’t confined within Germany.

West Germany was a committed, vibrant member of NATO during the Cold War. But soon after the Wall was toppled and Germany reunited, Margaret Thatcher sensed that the German people were “losing their appetite for defense.” She was right.

In 2002, as the United States and Britain tried to build support for U.N. authorization to intervene in Iraq, Schroeder pre-emptively announced, “We will not be part of it” – with or without the U.N.’s blessing.

Defending Germany’s post-9/11 involvement in Afghanistan, German President Horst Köhler was forced to resign after noting, “A country of our size ... must be aware that military deployments are necessary in an emergency to protect our interests.” Köhler was talking about a U.N.-authorized mission that began because Afghanistan spawned an armed attack against a NATO ally.

In 2006, NATO urged members to invest 2 percent of GDP in defense. Today, Germany spends 1.3 percent of GDP on defense. And it shows. Germany – a nation of 83 million – fields just 185,000 troops, 67 operational fighter-jets and one operational submarine. Fifty percent of Germany’s 224 tanks are not combat-ready. Shockingly, German troops used broomsticks to simulate machine guns during a 2014 NATO exercise.

In response to NATO’s 2-percent target, then-German Foreign Minister Sigmar Gabriel said in 2017, “One has to ask whether it would really calm Germany’s neighbors if we turned into a big military power in Europe.” This is sophistry. Germany fielded 585,000 troops in 1990. Worse, using the ghosts of German militarism to justify German disarmament is deeply cynical.

After SEAL Team 6 eliminated Osama bin Laden, a German magistrate filed a criminal complaint against Chancellor Angela Merkel for “endorsing a crime” because she dared applaud the takedown of a mass murderer. Scrambled by moral relativism, 64 percent of Germans agreed with the magistrate.

In 2011, Germany abstained from a U.N. Security Council resolution aimed at protecting Libyan civilians from Muammar Qaddafi, then refused to join NATO’s efforts to enforce that resolution.

Britain and the United States recently asked Germany to participate in a multinational effort to protect civilian vessels against Iranian piracy. Germany refused, prompting a U.S. Embassy official to state the obvious: “Members of the German government have been clear that freedom of navigation should be protected ... Our question is, protected by whom?”

Yes, other NATO allies fall short. But as the geographic center of NATO and as Europe’s largest economy and most populous nation, Germany’s failures are more obvious – and less defensible. Yes, Germany has contributed to the anti-ISIS coalition, Afghanistan mission and NATO’s rotational presence in Eastern Europe. But there are enormous asterisks attached to these contributions:

• In the anti-ISIS campaign, Germany’s military involvement was limited to training Iraqi personnel and deploying reconnaissance/refueling aircraft. The coalition requested and needed more.

• Berlin initially “blocked efforts to place NATO troops in Central and Eastern Europe,” as Military Times reports. Merkel insists, “We won’t have a permanent stationing of combat troops” in the Baltics.

Speaking of preserving international order, West Berlin offers a lesson for today. Thoughtful critics of NATO’s deterrence mission in the Baltics worry about their remote location and strategic-depth issues. But strategic depth and resupply were a concern even when NATO’s footprint was smaller and capabilities greater. West Berlin was literally surrounded by Soviet bloc armies. Kennedy called it “a defended island of freedom.” It remained free only because it was defended.

The same lesson applies in Taiwan – another isolated patch of freedom under threat. What was true in West Berlin is true today in Eastern Europe and the South China Sea: defending our interests, our allies and values is a matter of will.

CLASH Political scientist Francis Fukuyama concluded that the end of the Cold War marked “the end of history ... the universalization of Western liberal democracy as the final form of human government.” In other words, the ideological struggle between centralized political-economic systems and liberal political-economic systems was over – and free government and free markets won.

The late historian Samuel Huntington was not so optimistic, arguing that the end of the Cold War would re-awaken “a clash of civilizations” and that “the fault lines between civilizations will be the battle lines of the future.” Without the stabilizing – indeed, smothering – weight of the two superpowers, Huntington warned that ethnic, religious and nationalist passions would return.

“Acceptance of democracy as the world’s dominant form of government – and of an international system built on democratic ideals – is under greater threat than at any point in the last 25 years,” Freedom House concludes, reporting 13 consecutive years of global decline in political rights and civil liberties.

Hungary, Poland, Romania and the Philippines show signs of backsliding away from liberal democracy. Venezuela, Turkey and Russia have drifted from democracy to autocracy. And although Germany remains a liberal democracy, it seems to have forgotten the lessons of Berlin – namely, that freedom must be defended.

As Huntington warned, ethno-religious and ethno-national conflicts have marred the decades since the Wall’s collapse: Serbia’s ethnic-cleansing of Bosnia; the Hutu genocide of Tutsis in Rwanda; tribalism in Somalia, Sudan and Syria; the rise and reach of al-Qaida and ISIS; the metastasizing Shia-Sunni conflict; the near-eradication of Yazidis and Christians in Iraq; Russia’s assault on Ukraine, perpetrated in the name of Novorossiya, “new Russia.” Unlike the Cold War – an ideological-political struggle – these conflicts are about race and religion, tribe and territory.

Historian Niall Ferguson observes that Nov. 9, 1989 – the day the Wall fell and the Cold War ended – represents “the real historic turning point” for Germans and most Europeans. The reason: The ninth day of November – written as “9/11” in Europe – is when most Germans and most Europeans concluded that conflict and sacrifice were relics of the past.

Nov. 9, 1989, was significant for Americans, too. After all, they waged the Cold War at great peril and price. Winning it – tearing down the Wall – was a towering achievement. But with greater responsibilities, America could not celebrate the end of conflict or the end of history. That became clear on another “9/11” – and grows more obvious as China and Russia usher in Cold War 2.0.