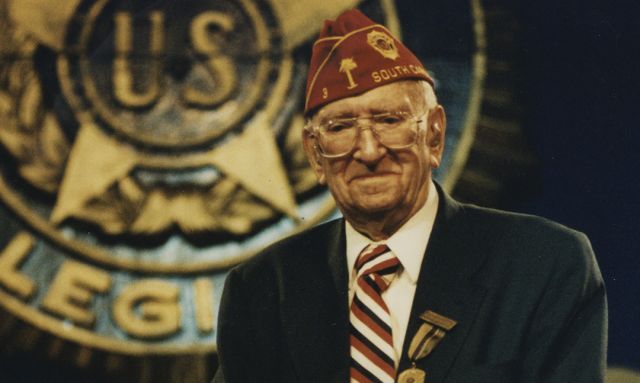 In this final installment of “To Strengthen a Nation,” a 16-part American Legion Magazine series that has explored aspects of the organization’s first century, the words of Past National Commander E. Roy Stone Jr. are offered as a timeless statement. This essay first appeared in the September 1994 75th-anniversary issue of The American Legion Magazine. On Sept. 12, 1994, it was entered into the congressional record by Rep. G.V. “Sonny” Montgomery of Mississippi, then chairman of the House Veterans Affairs Committee. Stone’s essay is excerpted here.

For 48 years, I have had the high privilege of serving on the national level of The American Legion, the world’s largest veterans organization. From the day I walked through a naval hospital ward in Oakland, Calif., and saw the mutilated bodies of World War II GIs, I knew that I wanted to do something to help veterans and their families.

When I returned to my home state of South Carolina after World War II, I went to our state’s only veterans hospital and saw men being put in the hallways – the VA had a waiting list of over 800 GIs. Later, I went to the funerals of some of the men who were stored in the halls because VA didn’t have the space to treat them.

After seeing all of this, I became an active Legionnaire – determined that I would try to alleviate crowded conditions in our VA hospitals; give sympathy to the suffering; give strength to the weak; and to keep faith with my fallen friends.

I was determined that their supreme sacrifice would not be in vain. And so, I joined The American Legion, whose principles of right and wrong have become an integral part of the American way of life.

I want to take an opportunity to salute the ideals that have made The American Legion the unselfish and unequaled champion of the veteran.

WE BELIEVE A VETERAN IS A VETERAN.

One of the great accomplishments of The American Legion has been making veterans’ benefits and rehabilitation a non-partisan issue. If something is good for veterans, the Legion will be for it. And no matter which side of the aisle raises an issue in Congress, the Legion hollers the same challenge: “How will this help veterans?”

Legionnaires are Republicans, and they are Democrats. They are senators, congressmen, firemen, doctors, lawyers, clergymen, insurance salesmen, grocers, barbers, and career military men and women. They are old, and they are young. They are rich, and they are poor.

The Legion also doesn’t make a distinction between officer and enlisted, Army or Navy, Air Force or Marines, Coast Guard or Merchant Marine. All of us have served our country during times of war, and we share a common experience and in many cases common sacrifices.

We live with memories of war that humble us and fill us with a sense of spiritual connection to the freedom that Americans enjoy. We have a stake, if you will, in seeing our country live on and grow strong because we witnessed so many give their blood and sometimes their lives toward this end.

While the Legion is non-partisan, many of you know that there are a lot of politicians in the Legion. We are sort of a cross between a lobbying group and an advocacy organization that looks out for America’s veterans. And our members give us a voice that can be heard in small towns and big cities from coast to coast.

We believe the contributions of America’s veterans and their sacrifices have earned them special consideration. But like the team that is the U.S. Armed Forces, no veteran is more or less deserving of that which has been earned with blood.

The Legion is committed to seeing VA live up to the inscription on the plaque that rests on its Washington, D.C., headquarters building: “To care for him who shall have borne the battle and for his widow, and his orphan.”

WE BELIEVE PROMISES MADE TO VETERANS MUST BE PROMISES KEPT.

The Preamble to the Constitution of The American Legion is an ideal, a set of missions and battles that can never be decisively won or lost – only fought for.

Despite the lessons of history and the proud heritage that should elevate the veteran to the highest degree of respect, there will appear on the horizon those who will want to cut the VA budget, eliminate beds in VA hospitals, and cut down or cut out veterans’ benefits. But The American Legion has always maintained that promises made to veterans must be promises kept.

Many short-sighted policy-making officials and their followers will look upon the veteran not as a hero, but as an economic liability. The American Legion, often as a lone voice, has argued for honoring the commitment the nation makes to those it sends into battle: If you serve your country, you will not be forgotten.

When World War II veterans returned home, the Legion – by writing and introducing the GI Bill – made sure they could get an education and successfully assimilate back into society.

The GI Bill was, and is, our greatest legislative achievement.

When Vietnam veterans began experiencing Agent Orange-related health problems, our Legion stood by them and does to this day. While VA now admits a link between the defoliant and many diseases, those years of denial were tough times for afflicted veterans. The Legion was their only ally.

And when the families of our POW/MIAs could expect no help from the U.S. government and little media attention, the Legion came through with recommendations to end their suffering and obtain the fullest possible accounting.

In veterans affairs and rehabilitation, the Legion has always stood by veterans as they stood by their country in war.

WE BELIEVE IN PATRIOTISM AND AMERICANISM OVER ALL OTHER “ISMS.”

The founders would be very proud of what the Legion has done for this country because The American Legion has always emphasized patriotism and Americanism over all other “isms.”

We have pressed for a strong national defense when others have blindly accepted the lull of peacetime safety.

We have educated America’s young men and women in love of God and Country and helped nurture new generations of great Americans. And we have fought communism and fascism all over the world through our efforts on Capitol Hill.

We believe in a strong America – an America that has the economic and military might to keep democracy alive here at home and overseas.

WE BELIEVE IN KEEPING FAITH WITH OUR FALLEN COMRADES.

We must rededicate ourselves to the ideals of our organization, be active, and keep faith with our fallen comrades. We must gird ourselves for any legislative fight that may become necessary, and see that any veteran who needs hospital or nursing care will have it.

No compromises. Right is right. Wrong is wrong.

As we celebrate our years of service to community, state and nation, we are proud of our past record of accomplishments. We look forward to an even brighter future.