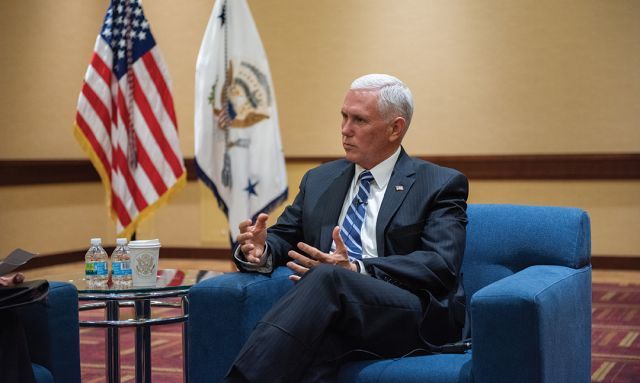 Even Vice President Mike Pence’s political opponents acknowledge his strong communication skills. That’s not surprising, considering Pence was a radio talk-show host before winning a series of elections that took him to Congress, the Indiana governorship, and now the vice presidency. Less known is the critical role The American Legion played in helping a young Pence hone those speaking skills. As a student at Columbus North High School in 1976, he was runner-up in the American Legion Department of Indiana Oratorical Speech Contest. The following year, as a senior, Pence won the competition.

At the 101st National Convention in Indianapolis in August, Pence spoke with John Raughter, deputy director of media relations for The American Legion,  about the organization’s influence in his life and its continuing commitment to the nation’s veterans and youth.

When it comes to developing good citizens, how important are American Legion youth programs?

What do you remember about participating in the American Legion Department of Indiana Oratorical Contest?

It was an enormously important experience in my youth – not so much the competition as the study I had to make of our Constitution, to write the speech and to prepare for the extemporaneous portions. I credit the American Legion Oratorical Contest with the beginning of my love affair with the Constitution of the United States. The way the contest to this day challenges young people to understand our glorious Constitution, to understand the ideals that are the foundation of this country, is an incredible contribution to the life of the nation.

For me, sitting in the library in Columbus, Ind., poring over books about the Constitution, beginning my own journey of understanding the principles enshrined there of limited government, of freedom of speech, freedom of religion, the right to keep and bear arms, and understanding the historical foundation of all of those things that have been defended by our veterans throughout all of the history of this nation ... I would tell you that experience in so many ways lit the pilot light of my love for the Constitution, which endures to this day.

What about our Constitution sets it apart from the governing documents of other countries?

Well, ours is singularly the most successful republic in the history of the world. And it was all grounded on the ideals enshrined in our Declaration but expressed in the framework of the Constitution – that ours is a limited federal government with specific and enumerated powers. Our rights are enshrined in our Bill of Rights and thereafter, and in so many ways it represents the foundation of what has been the success of this country. I truly do believe that the source of American greatness has always been our faith in God, our freedom and our vast natural resources. And our freedom has been preserved, maintained and defended all in a foundation of the Constitution of the United States.

Did the communication skills you developed through the program help you in your careers as a radio show host and public servant?

There is simply no question that the opportunity to compete with some of Indiana’s best and brightest in the American Legion Oratorical Contest sharpened my skills. It was the way The American Legion challenged me to go study the Constitution, and understand it and explain it and be able to defend it on my feet, that had the greatest impact on my life and my career, an impact to this day. I still have the textbook written by a history teacher from Columbus that I used in my preparation for the contest.

You are the son of a Korean War veteran and the father of a U.S. Marine. Do you have advice to the parents of children who are considering military service? What is the most difficult challenge for Blue Star families?

Thank you for mentioning my dad. He’s (been) gone 30 years. He is a Bronze Star recipient from Korea. He fought on Pork Chop Hill. My dad never considered himself a hero. When he spoke of heroes, it was friends he lost. When I arrived in South Korea my first time as vice president, I was deeply moved at posters that were up around the capital of South Korea that mentioned my dad by name: Lt. Edward J. Pence. Our son, a captain in the Marine Corps, and our daughter, (who) just got engaged to a Navy pilot – are among the greatest sources of pride for Karen and me. We greatly admire our son and daughter-in-law’s commitment, and our future son-in-law and daughter’s commitment, to serve this country.

My wife’s very involved in efforts to support military families and spouses. There are unique challenges, not just during deployment but also when military personnel are assigned to another base or squadron or unit; that family’s uprooted, and we’re working hard to make sure that spouses are able to continue their careers at the new assignment or have the support they need during deployments. I’m proud of the progress we made.

I think anybody who has a desire to serve our country in public office would do well to think about starting their careers by serving our country in uniform. It isn’t the path my life took, but for me to see the men and women of our military today, the caliber and the character of those who have served, I can’t think of a better place to start a life, to start a career, to start a life of service, than serving in our armed forces.

Is there anything you’d like to tell members of The American Legion?

The Bible says if you owe debts, pay debts. If honor, then honor. If respect, then respect. I want members of The American Legion to know that their vice president and my family feel a great debt of gratitude to the Legion for what it has meant in my life ... helping to shape my views, my love for the Constitution, but also the way The American Legion is there each and every day for our active-duty military, for our veterans, and making sure the youth of America understand the ideals and principles upon which this nation was founded.
I just want to say thanks.