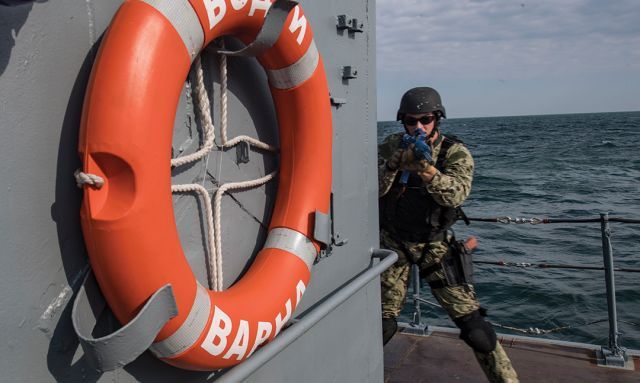 "There is only one thing worse than fighting with allies,” Winston Churchill observed, “and that is fighting without them.”

After standing alone against Adolf Hitler – and then enduring the headaches and heartaches of North Africa, Normandy and NATO’s early years – Churchill understood the benefits and burdens of alliances.

U.S. leaders can relate to the British prime minister’s observation. Alliance maintenance is an endless, thankless exercise in cajoling, coaxing and compromising. But it’s better than the alternative: not having any allies.

They may be fickle. They may require more attention than expected. They may not contribute their share to the common defense, as President Trump points out. But with the Middle East on fire, Russia on the march and China on the rise,America’s allies are more important today than at any time since the beginning of the Cold War.

‘A COMMON STRUGGLE’America’s wariness of alliances is part of its DNA.

“It is our true policy to steer clear of permanent alliances with any portion of the foreign world,” President George Washington explained, cautioning against “foreign alliances, attachments and intrigues.” President Thomas Jefferson echoed Washington by calling for “peace, commerce and honest friendship with all nations, entangling alliances with none.”

Heeding their advice, President Woodrow Wilson insisted that the United States maintain its independence as an “associated” power during World War I, bluntly declaring, “We have no allies.”

Given those historical markers, U.S. alliance-building efforts during the Cold War seem to be a dramatic departure from Washington’s counsel. As President John Kennedy observed, “We put ourselves, by our own will and by necessity, into defensive alliances with countries all around the globe” – NATO, SEATO, ANZUS, the Rio Pact, bilateral treaties with Japan, the Philippines and South Korea.

Yet America’s participation in alliances predates the Cold War. In January 1942, just weeks after Pearl Harbor, the United States organized a 26-nation alliance to wage “a common struggle” against the Axis powers.

U.S. involvement in alliances even predates World War II. In fact, America pursued alliances from the very beginning. We seem to forget that Benjamin Franklin traveled to Paris in 1776 to negotiate – and ultimately secure – an alliance with France. Between 1778 and 1782, as a State Department history details, France “provided supplies, arms and ammunition ... troops and naval support ... transported reinforcements, fought off a British fleet, and protected Washington’s forces in Virginia.” While serving as ambassador to France, Jefferson proposed a U.S.-European “confederation” to fight piracy.

In short, there has always been tension between America’s desire for independence and recognition of the benefits of alliances. But the notion that we avoided alliances until the Cold War is a myth.

A LARGER LOAD What’s not a myth is that America tends to carry a larger load than its allies. This has been true for many decades.

The U.S. share of NATO defense spending is 70 percent today.

There’s a reason the United States shoulders a bigger share of the burden of alliance operations: it’s, well, bigger. The United States has a GDP of $20.5 trillion, a population of 327 million and, owing to its victories in World War II and the Cold War, interests and bases around the world.

Thirty nations have contributed troops to the anti-ISIS campaign. Australia, Belgium, Britain, Canada, Denmark, France, Jordan and the Netherlands joined the United States in conducting airstrikes in both Iraq and Syria. Australia, Britain, Denmark and France deployed commandoes for kinetic operations. Germany trained Iraqi troops. Turkey conducted airstrikes and allowed its bases to be used. The French aircraft carrier Charles de Gaulle served as a command center during the operation. After Bashar Assad’s chemical attacks in 2018, Britain and France joined the United States in conducting punitive strikes against his regime.

To be sure, some allies could be more helpful or less exasperating: Germany could spend more on defense, Tokyo and Seoul could settle a century-old dispute over the policies of Imperial Japan, Turkey could stop buying Russian weapons and start behaving like ademocracy, and Canada could join allied missile-defense efforts. But given the economic and demographic disparities between the United Statess and its allies, expecting them to contribute as much as America to the common defense seems unreasonable.

RENEWED COOPERATION At the height of the Cold War, the United States accounted for 56 percent of NATO’s defense spending, the rest of the alliance 44 percent – far more balanced than today’s 70-30 split. That explains why Trump, Obama and their defense secretaries have spent the past decade calling on NATO allies to contribute more to the common defense.

The message is getting through. Reawakened to the Russian threat, 26 NATO members increased defense spending in 2018. By the end of 2020, NATO Secretary-General Jens Stoltenberg reports, NATO’s European and Canadian members will add $100 billion extra toward defense. By 2024, two-thirds of the alliance will meet NATO’s standard of investing 2 percent of GDP in defense.

South Korea spends $924 million annually to support America’s presence. Seoul shouldered 90 percent of the costs for a new U.S. base, and plans to increase defense spending by an average of 7.1 percent annually between 2020 and 2024.

Australia is increasing defense spending 81 percent between 2016 and 2025, doubling its submarine fleet, procuring 72 F-35As, and hosting thousands of U.S. Marines.

This newfound commitment to the common defense is posturing the West to respond to Russian, Chinese and Iranian aggression.

NATO’s European members have added 109,000 troops since 2015. Germany, Britain and Canada are spearheading NATO’s forward-deployed battle groups in the Baltics. At U.S. urging, NATO recently approved the “Four 30s Plan,” under which NATO allies will have 30 troop battalions, 30 squadrons of strike aircraft and 30 warships ready within 30 days of a go-order.

Britain is standing up two Littoral Strike Groups – one in the Indo-Pacific, the other in the Mediterranean-Atlantic.

The U.S. and German armies recently signed a “strategic vision statement” that will lead to “an unprecedented level of interoperability,” according to Defense News, with German brigades deploying under operational control of U.S. Army division headquarters.

Japan, Australia, Britain and France have joined the United States in enforcing freedom of navigation in and above the South China Sea. Canada and France sent warships through the Taiwan Strait in 2019, joining the U.S. Navy in signaling Beijing that it cannot cordon off international waterways.

Britain, Australia, Albania, Saudi Arabia, Bahrain, Qatar, Kuwait and the UAE have joined the United States in a mission to protect the Persian Gulf against Iranian piracy. South Korea is deploying an anti-piracy unit to assist.

NATO members are bolstering U.S. efforts to project stability far beyond the Euro-Atlantic region: it recently launched a 600-man mission to provide sustained training to the Iraqi army.  NATO is coordinating with Australia, New Zealand, Japan and South Korea “to address the rise of China,” Stoltenberg reports. In response to Russia, NATO is increasing its interest and presence in the Arctic.

Plus, NATO serves as the core of the Proliferation Security Initiative (a coalition committed to interdicting WMDs and WMD delivery systems on the high seas) and Combined Maritime Forces (a 33-nation partnership focused on counterterrorism, counterpiracy and security in the Persian Gulf).

“If we didn’t have NATO today, we’d need to create it,” Gen. James Mattis contends. “NATO is vital to our interests.”

INSURANCE Indeed, all these allied contributions help secure U.S. interests – the most important of which is preventing great-power war.

NATO and America’s bilateral alliances in the Indo-Pacific are, for lack of a better term, insurance policies. For Europe, Canada, Japan, South Korea, Australia and the Philippines, defense treaties with the United States serve as insurance against invasion. Without that insurance, there’s no security, as history has a way of reminding those on the outside looking in – from Cold War Hungary to post-Cold War Ukraine.

For the United States, these treaties insure against another Korean conflict, European crisis or surprise in the Pacific triggering another war that would inevitably draw it in.

Like all insurance policies, there are costs associated with alliances. U.S. defense expenditures earmarked for Europe amount to $36 billion per year. That’s a lot of money. But consider what we get in exchange for that insurance premium: a Europe not at war with itself, reinforced against invasion and free from any hostile force; bases that enable the United States to project power; and the vast trade and economic benefits that flow from these realities. (U.S. trade with NATO allies tops $1.6 trillion annually, with Japan, Korea, Australia and the Philippines $508 billion annually.)

These alliances are neither a drain on America’s treasury nor a chain dragging America into war. In fact, by deterring hostile regimes, serving as bridges to global hot spots, creating lines of defense beyond America’s shores, building confidence between old enemies, buttressing a liberal international order that sustains the American way of life, and generating sources of material and diplomatic support for American leadership, these alliances have enhanced America’s power and security.

“Our strength as a nation is inextricably linked to the strength of our unique and comprehensive system of alliances,” Mattis explains. “While the United States remains the indispensable nation in the free world, we cannot protect our interests or serve that role effectively without maintaining strong alliances.”

The “myth is that our allies are making us poor by free-riding on our military expenditures,” Gen. William Odom, former director of the National Security Agency, argued in 2008. “How are we to explain that the United States has gotten richer than its allies? … Our military alliances, by lowering transaction costs, have facilitated the vast increases in international trade from which the United States profits enormously. Our military costs should be seen as investments that pay us back.”

“There is no hope for the United States to sustain its role as the world’s sole superpower without the Europeans as allies,” several former NATO commanders add.

The generals recognize something that many Americans overlook: protecting the homeland, promoting U.S. interests, preserving some
semblance of order, preventing great-power war. These missions depend on infrastructure in places like Lakenheath, Fairford, Ramstein, Thule, Aviano, Yokosuka, Osan, Pyeongtaek, Diego Garcia and Manama.

Having access to that infrastructure depends on having allies – headaches, heartaches and all.