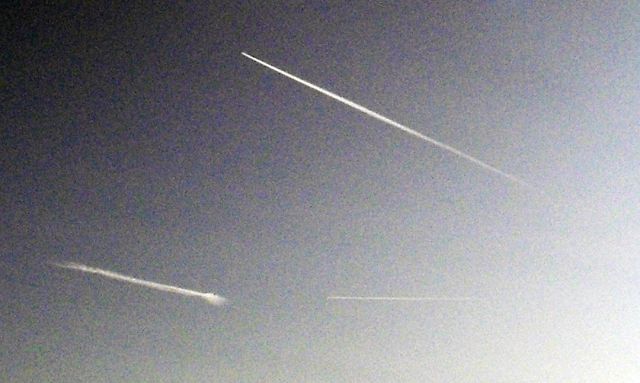 On Dec. 16, 2017, The New York Times ran a front-page story revealing the existence of a congressionally mandated program to study unidentified flying objects (UFOs). The article was accompanied by two recently declassified DoD videos obtained by F-18 fighter pilots. On both occasions, the UFOs were seen in broad daylight by numerous Navy personnel, the reports were independently corroborated by sophisticated military sensor systems, and the unidentified aircraft demonstrated revolutionary aeronautical capabilities. For example, some of the craft were observed descending from altitudes above 80,000 feet, then hovering as low as 50 feet above the ocean before accelerating to hypersonic speeds from a dead stop.

As more information emerged, including the release of another official DoD UFO video, a handful of senators and representatives on the national security oversight committees sought briefings. At this point, the Navy and DoD could no longer conceal the truth.

Joseph Gradisher, spokesman for the deputy chief of naval operations, admitted that the vehicles in the declassified Navy videos are neither a hoax nor secret U.S. test aircraft: “The Navy designates the objects contained in these videos as unidentified aerial phenomena,” or UAP. In other words, they might be Russian, Chinese or even alien spacecraft. Whatever they are, they are real, they aren’t ours, and they continue to violate U.S. airspace with impunity.

With that short statement, the Navy upended the conclusions of every prior U.S. government examination of the UFO phenomenon, from Project Sign in 1948 to Project Blue Book, which was terminated in 1969. Written when the Cold War was in full swing, these reports were designed to debunk UFO sightings and discredit civilian UFO researchers in order to reassure, rather than inform, the public. It is hardly surprising, then, that despite hundreds of cases defying explanation the Air Force concluded there was “no evidence of developments or principles beyond the range of modern scientific knowledge” and that no case “reported, investigated and evaluated by the Air Force has ever given any indication of threat to our national security.”

The only scientist assigned full time to Project Blue Book, astronomer Allen Hynek, expressed his contempt for these findings, calling the project’s statistical methods “nothing less than a travesty” and the attitude and approach within Blue Book “illogical and unscientific.” It is now obvious that the stigma the Air Force sought to create worked only too well, causing most U.S. military and intelligence personnel to conceal rather than report UFO/UAPs – a process of self-blinding that resulted in decades of lost data.

The evidence provided by DoD videos and radar is vital for intelligence analysis, yet there is nothing more compelling than meeting the Navy pilots and hearing their stories firsthand. In my conversations with Cmdr. David Fravor, his excitement was palpable and contagious, as were the fears of his anonymous female wingman when she described the surreal manner in which the UAP seemed to defy the laws of physics, tumbling through nonsensical angles to maintain a dominant position vis-à-vis Fravor’s F-18.

Internet talking heads like to cast doubt on these accounts, proposing spurious theories of ghost aircraft lacking transponders lurking in restricted DoD airspace. Clearly they have not interviewed the pilots and radar operators who encountered these objects at close range. Had they done so, they would find no ambiguity, doubt or confusion. Fravor’s wingman told me, and Fravor agreed, “We didn’t stand a chance against it.” I cannot imagine Navy F-18 pilots saying that about any Russian or Chinese fighter. These sobering words from badass Navy combat pilots should be taken to heart by DoD officials and Congress.

Indeed, the radical and technologically superior nature of these craft is a common theme for Navy pilots on both coasts. In the famous “Gimbal” video posted by The New York Times, one of the pilots is heard to exclaim, “There’s a whole fleet of them out there!” He was referring to a V-shaped formation of smaller craft approaching the fighters as they observed a larger “mothership” in the video. At close range, these bizarre craft appear to be black cubes, the corners of which are touching the inside of transparent spheres a mere six feet in diameter. There are no discernable air inlets, exhaust, wings, or means of lift or propulsion, yet they have been tracked at supersonic speeds and seem able to remain aloft indefinitely. They could hardly be more strange and alien in appearance or behavior. Yet an obdurate DoD bureaucracy is making almost no effort to determine the origin of these craft or their means of propulsion.

If we knew for certain that the Russian or Chinese militaries had leapfrogged the United States technologically, there would be an uproar, much as there was when the Soviet Union launched Sputnik, the world’s first man-made satellite. Fearful of falling behind, the public grew restive and Congress promptly responded by increasing spending for NASA and bolstering science-education programs. These initiatives paid handsome dividends 11 years later when Neil Armstrong set foot on the moon, arriving courtesy not only of a new space vehicle but thousands of patented new technologies that strengthened U.S. industry and leadership in science and technology.

Although it seems a major new technology gap has been identified, there is no discernible effort underway to verify the gap, much less close it. True, the Navy states that it is “updating and formalizing the process by which reports of any suspected incursions can be made to the cognizant authorities,” but little else has changed. No major investigations have been launched. There is no indication the DoD or intelligence community leadership is engaged. And there is still no process for collecting and integrating pertinent information about UFO/UAPs from the myriad agencies and departments that possess it (NASA, the National Reconnaissance Office, the FBI, the National Security Agency, the CIA, the Defense Intelligence Agency, the Department of Homeland Security, the armed forces and others).

This paralysis is occurring at a time when the scientific community increasingly recognizes the possibility of humanity encountering probes from spacefaring civilizations. In fact, last year the House Committee on Space, Science and Technology directed NASA to begin looking for “technosignatures,” by which it means alien space probes. This is happening because many exobiologists now recognize probes are more efficient and effective than radio waves for purposes of space exploration or contact. As unlikely as it may seem, there is no denying the possibility that some UFO/UAPs encountered by our military are probes launched by distant civilizations.

While military personnel such as Fravor and Lt. Ryan Graves – an F-18 pilot who said UFOs followed his Navy strike group for months – are awed by the technology they observed, they are undeterred, eager to give chase both literally and figuratively. Reflecting on his encounter, Fravor told me, “I want to fly that thing!” He naturally expects his country to figure out where these things come from, why they are here and how they work. Fravor and his colleagues at least still have the right stuff, even if the hierarchy above them is lethargic and risk-averse.

If nothing else, the U.S. government could at least examine the data already collected by our highly capable spy systems during periods of significant UFO/UAP activity. For example, since we know multiple UAPs were operating in close proximity to the Nimitz Strike Group during the week of Nov. 14, 2004, analysts could review archived data collected by the Space-Based Infrared System (SBIRS), the global infrasound network of the International Monitoring System and various space-based electronic sensors. Limiting such reviews to narrow periods of time and location would keep the workload modest and manageable. Reviews of this kind for incidents occurring off the East Coast since 2015 should also be conducted. Direction from Congress or a senior administration official is all it would take to initiate the process.

Though Navy pilots have sounded the alarm – their testimony has appeared in print, online and on national television – there is still no sign that our massive DoD and intelligence bureaucracies, or our Congress, are seeking answers to the UFO/UAP mystery on behalf of military personnel who are potentially at risk from midair collisions if nothing else (one near miss by a Navy fighter has already been reported).

At the strategic level, isn’t it odd that illegal immigration is an emergency requiring DoD to forgo billions in spending yet no funds are available to investigate hypersonic platforms capable of carrying weapons of mass destruction across U.S. borders? Is there any way to overcome this dilemma?

Perhaps. With little effort or expense, the Trump administration could request a National Intelligence Estimate on “anomalous aerospace threats” or something with a similarly appropriate and sober title. Alternatively, Congress could simply direct the defense secretary or director of national intelligence to prepare a threat assessment. These are modest, inexpensive proposals for assessing the serious concerns expressed by military personnel.

Another way to accommodate the political sensitivities of officials repelled by the UFO stigma would be to form an independent panel under the auspices of the National Science Foundation (NSF). There is no shortage of cleared scientists in industry and academia who could serve on such a body. The administration could undertake this initiative on its own, or Congress could pass a measure to establish and fund it.

Pearl Harbor and 9/11 are tragic examples of intelligence failures that could have been avoided. Our continuing inability to identify the radical aerospace vehicles violating our airspace is an ongoing intelligence failure, one that arguably requires written notification to the House and Senate intelligence committees pursuant to Section 502 of the National Security Act of 1947.

While Congress has not received a formal notification regarding this failure, and perhaps never will, it is certainly aware that DoD is unable to identify these aircraft or prevent them from violating U.S. airspace. The question now is whether our leaders will remain passive out of concern for outdated stigmas or act on behalf of our servicemembers and our nation.

If we fail to thoroughly investigate, in the wake of reliable pilot reporting and the Navy’s admission, it can only be because policymakers are prioritizing political expediency over national security – a state of affairs reminiscent of the declining Roman Empire, when the needs and concerns of troops in the field were given short shrift by maneuvering politicians in Rome. Hopefully, support for our troops is one thing that still unites us.

Christopher Mellon served as deputy assistant secretary of defense for intelligence in the Bill Clinton and George W. Bush administrations. He is an adviser to the To the Stars Academy for Arts and Science, a privately owned media and scientific research company. He also serves as a contributor to HISTORY’s popular nonfiction series “Unidentified: Inside America’s UFO Investigation.”