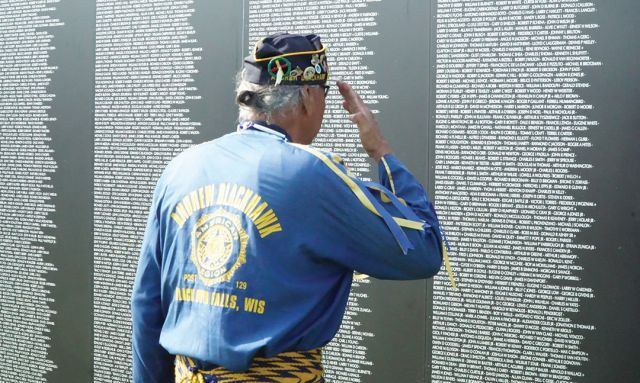 The Vietnam War Commemoration is grateful to the American Legion posts and Auxiliary units across the nation that are commemorative partners with us, and continue to thank and honor our Vietnam War veterans and their families who so richly deserve recognition for their service and sacrifice during the war. Most were not thanked when they returned from that conflict. American Legion posts are doing the right thing by thanking them and welcoming them home.

On Sept. 28, 2019, American Legion Post 17 in Naugatuck, Conn., celebrated the centennial of The American Legion and Post 17 in an event honoring veterans of all eras, including Vietnam. To date, 375 American Legion posts have hosted 783 Vietnam War Commemorative Partner events like these, reaching 82,918 Vietnam War veterans and their families. A huge thank you to Post 17 and others for helping connect us with and thank Vietnam veterans.

Americans have been uniting to thank and honor veterans who served during the Vietnam era – and their families – for years. But we have many more to find and recognize. Spearheading this effort is the United States of America Vietnam War  Commemoration, which was authorized by Congress under DoD auspices and launched at the Vietnam Veterans Memorial in 2012. Our goal is to thank and honor America’s 6.4 million living veterans of the 9 million who served on active duty in the U.S. Armed Forces from Nov. 1, 1955, to May 15, 1975 – regardless of location – and the families of all who served. The commemoration is supported by American Legion resolutions.

The Department of Veterans Affairs estimates that we are losing more than 500 of these veterans every day. We must act now to do what should have been done 50 years ago. We must personally thank each of these Vietnam veterans and their families for their service to the nation, and we need Legionnaires’ help to engage communities so they can be recognized in the places where they live and work.

The commemoration committee is coordinating with governors of all U.S. states, commonwealths and territories, as well as the mayor of the District of Columbia, to conduct events on or around this day. All have already hosted events of some type for Vietnam War veterans and their families.

The Vietnam Veterans Memorial in Washington, D.C. – known as “The Wall” – will again, and always, have a significant role in our nation’s honoring of Vietnam War veterans on March 29. The Wall is an arresting reminder to more than 5 million annual visitors of the service and sacrifice of more than 58,000 Americans. There is something haunting, cleansing and healing about this hallowed site, and we encourage every American to experience it.

Commemorative Partner Program Our Commemorative Partner Program is an organizationally based, hometown-centric initiative established to reach Vietnam War veterans and their families in their communities. Nearly 12,000 partners have committed to conducting local events or activities annually for three years to recognize, thank and honor our veterans and their families. They are a mix of local and national businesses, corporations, veteran and military organizations, associations, educational institutions, community groups, towns, cities and states. To date, they have conducted more than 17,000 events honoring approximately 2.5 million Vietnam-era veterans, and more than 41,000 families have received special recognition in memory of their veterans (the Certificate of Honor program online at vietnamwar50th.com). We heartily thank them for their continued efforts to recognize more veterans and families. We are now seeking assistance to find those Vietnam-era veterans who are unable to attend events. Many are in care facilities, nursing homes, hospitals, or in their homes and unable to travel.

Vietnam Veteran Lapel Pin The commemoration provides Vietnam Veteran lapel pins to our commemorative partners for dignified public presentations during commemorative events, for living veterans who served on active duty during the specified timeframe, regardless of location of service. Each veteran who served during the dates is eligible to receive one lapel pin, as a tangible sign of our nation’s gratitude. Inscribed on the back are the words “A Grateful Nation Thanks and Honors You.”

Veterans and their families can search for upcoming commemorative events in or near their hometowns at vietnamwar50th.com/events. Zoom in to locate your state and city or town, and click on a blue pin for details of an upcoming event, including contact information. There is a “Contact Us” button at the top of the page for veterans who need help finding an event. If there are no events in your area, check back frequently, as new events are added weekly.

James T. Jackson is a retired Army major general and director of the United States of America Vietnam War Commemoration.