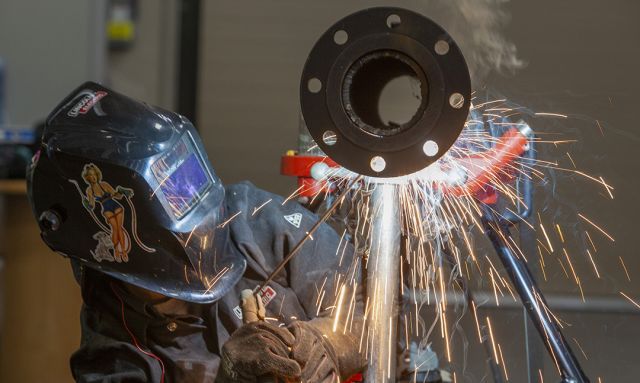 James Brown was anxious as he met with his first potential civilian employer after 20 years of combat deployments and counterintelligence work. “I never realized, until I sat down, that I hadn’t ever had a job interview,” says Brown, who had been in the Army since the day after he left high school. “The interviewer said, ‘I want to know you as a person.’ That terrified me.’”

Even so, the Army prepared Brown for this sort of challenge with its Career Skills Program. He landed the job and went from leading sniper teams and doing threat assessments in combat zones to keeping the heating and air conditioning humming at a Honeywell aerospace plant.

“The change was healthy,” says Brown, a third-year HVAC/R apprentice. “I love working with my hands. I love creating. I love problem solving. But I’m also helping DoD by working for a defense contractor.”

Brown is a 2018 graduate of the UnitedAssociation Veterans in Piping Program at Joint Base Lewis-McChord (JBLM) in Washington state. It was the first of 18 programs established there when job counselors, employers, trade unions and the military joined forces to help departingservicemembers find meaningful work with living wages. “It makes that transition so much more seamless,” Brown says. “The steady platform you are stepping on allows you to continue to be the rock for your family. It lowered my stress level – and everybody else’s as well.”

REVERSE BOOT CAMP Career Skills was launched after the 2014 military downsizing that sent thousands of servicemembers looking for civilian jobs. But there had been a pressing need even without the dramatic force reduction because there’s always a steady stream of people leaving the military. JBLM alone sheds about 5,500 soldiers and airmen a year, many of whom don’t have experience with writing a résumé, job networking or interviewing.

“I think of it as reverse boot camp,” says William Noland, an Army veteran who manages JBLM’s Career Skills Program. “We’re giving servicemembers the opportunity to figure out what the next step is so they are employed when they get out of the military.”

Servicemembers who are transitioning out of the military and able to step away from their regular units have the option of spending their last months trying out everything from corporate fellowships to custom motorcycle repair. They may also be able to go to another military installation for training if their preferred career specialty isn’t offered at JBLM.

“You name it, we can pretty much design it,” Noland says. Prior to working at JBLM, he developed a program that allows servicemembers who work on airplanes and helicopters to earn their civilian FAA Airframe and Power Plant license in nine weeks instead of the normal 23 months because they get credit for experience working on military aircraft. Now it’s part of JBLM’s career skills offerings.

Some courses are taught on base by instructors from a skilled trade union or a vocational school. Others involve internships at companies such as Boeing, PACCAR and Amazon. Servicemembers get industry experience and the opportunity to decide whether they want a career in a particular field, Noland says. The biggest reason the program works: participating servicemembers are still on active duty during the training, and they continue to receive their standard wages and benefits. That means they don’t have to worry about supporting their families while they train for their transitions to new careers.

“We’ve got a ground-breaking program,” Noland says. “We want to show America that soldiers can come back as civilians and be successful.”

It’s also crucial to the long-term well-being of people leaving the military, says Peter Lahmann. His brother, Kenneth, struggled after he got out of the service and died by suicide in 1988. “He had a good job in the Army,” Lahmann says. “And when he got out, he couldn’t seem to get both oars in the water at the same time.”

Lahmann has worked as an apprenticeship coordinator for the Laborers Union in southwest Washington and served as chairman of the Washington State Apprenticeship Coordinators Association. In honor of his brother, he volunteers at JBLM’s Transition Assistance Program most Wednesdays to talk to servicemembers about the 170 apprenticeship programs available in Washington. “I was a construction trainee,” he says. “Because of my brother, I want to make sure everybody has the opportunity for an apprenticeship.”

Opportunities like the Career Skills Program are an American Legion priority as well. “The U.S. military is the single largest provider of education and training in the country, yet for millions of veterans there is a disconnect between the education and training they receive in the military and the credit they receive in the civilian world,” says John Kamin, assistant director of the Legion’s Veterans Employment & Education Division. “For over 20 years, The American Legion has been working to overcome these barriers by convening key groups of stakeholders and coordinating the development of strategies to enhance the ability of servicemembers and veterans to access the skills training or the credentials they need to enhance their career prospects in the civilian workforce.”

PIPEFITTING FUTURE The United Association of Journeymen and Apprentices of the Plumbing and Pipe Fitting Industry (UA) had already established a training program at JBLM when Career Skills began. The Veterans in Piping (VIP) program provides transitioning servicemembers an 18-week course in welding, HVAC/R technical services or sprinkler fitting depending upon the location, says Anders Aadland, a retired Army major general and senior consultant to VIP. There are no technical prerequisites, and most participants have no experience in pipefitting. UA pays for the training, which takes place on base, and graduates are guaranteed a job in the location of their choice as long as there’s work available.

“These young troops have a work ethic, discipline and values that make them a valuable resource of talent that can be invested in the construction industry’s aging workforces,” Aadland says.

‘JOBS IN EVERY ZIP CODE’ Truck driving is one of the most popular career skills options at JBLM. It takes the least amount of time to complete – about five weeks – and most participants have multiple job offers within a few days of starting the class. The CDL School provides the training at JBLM and near or on five other military installations as part of its Troops Into Transportation initiative, says Andrea Hanley, the company’s executive vice president. She and her brother, Al Hanley III, started the program in 2012 in response to a shortage of qualified drivers.

“The trucking industry wanted to hire veterans,” says Al, the company’s president. “Once they found them, they lacked the basic qualification to do the job: a Class A Commercial Driver’s License and proper training.”

The Hanleys have a personal connection to this work. When their father came home from his Army tour in Vietnam, he didn’t have a job. But he had a commercial driver’s license because their grandfather had a truck-driving school in upstate New York. That enabled their father to drive for a beer distributor and go back to college. “He was able to support his family because he had this credential in his back pocket,” Andrea says.

The majority of servicemembers who enroll in Troops into Transportation don’t have truck driving experience. They use a portion of their GI Bill benefits to pay for the school, but many employers offer tuition reimbursement. More than 5,000 veterans and transitioning servicemembers have completed the course and almost all work for trucking companies. “We rarely find someone who can’t navigate the program,” Al says. “And there are jobs in every ZIP code.”

BUSINESS TRACK JBLM’s corporate fellowship program grew out of a workforce development initiative called Camo to Commerce that was funded by a $5 million grant from the Department of Labor, says Rob Comer, who was the civilian project manager for the program at the base. Captains leaving the Army as a result of the 2014 downsizing weren’t finding jobs that matched their education and experience. Comer, an Army veteran, was asked to craft a solution. “The only thing that existed at JBLM at that time was Veterans in Piping,” he says.

Camo to Commerce quickly proved its worth. Hiring Our Heroes and the Chamber of Commerce Foundation hired former JBLM commander Chuck Hodges to launch the program nationally in 2015. Comer was brought on board in 2017 to continue the expansion. Qualifying servicemembers receive three-month internships at companies such as Starbucks, Amazon, Microsoft, Boeing, SpaceX and others. Many participants also chose to earn project management certification and other credentials.

“When you boil it down, this is an internship program with a training program woven in,” says Comer, a member of Pat Tillman Memorial American Legion Post 53 in DuPont, Wash.

Fellows are not guaranteed positions at the company where they intern, but 97 percent of the more than 450 fellows from JBLM landed jobs. Nationally, about 92 percent of the more than 2,500 corporate fellows have likewise found work through the program. “What I’m very proud of is that the fellowship was just an idea,” Comer says of its humble beginning, “and at JBLM we were able to grow into this program.”

Frank Handoe wrapped up a corporate fellowship at a Colorado Springs consulting firm last spring while transitioning out of the Army at Fort Carson, Colo. “It allowed me to focus on myself and my family and get ready for the transition,” says Handoe, who served 30 years in the Army. “It gives you three months to learn how to speak civilian, and three months to kick the bad habits you might have had.” One of the biggest challenges was losing his military identity, he adds. On the plus side, the 32 people in his fellowship cadre have become good friends.

Handoe and his family moved back to western Washington last summer – they were previously stationed at JBLM – and he’s hoping to land a job helping transitioning servicemembers. Meanwhile, he volunteers for the Career Skills Program at JBLM.

“It’s probably one of the best programs the services have implemented for departing servicemembers,” he says.

DREAM JOB Maria Imamura found her dream job and the camaraderie she’d been missing from her early days as a combat bridge crew member, through the Career Skills Program. Imamura graduated from the VIP welding program in June. She’s working on a liquified natural gas (LNG) plant in Tacoma and taking classes three nights a week as part of her five-year apprenticeship with the pipefitters union.

A mother of two children, Imamura would not have been able to participate without the military salary and housing benefits provided through the program. “We don’t make enough to live on my husband’s paycheck,” Imamura says. “Daycare is $1,100 for both kids. Rent is $2,200. Then there’s food and car insurance.”

She’s worked hard to prove herself as a woman – and as a veteran. “At first, the two journeymen I’m working with wouldn’t talk to me,” Imamura says. “Now they treat me like a little sister.”

Imamura, who served 14 years in the Army, has no regrets. “They say veterans only survive five to 10 years after separating from the military,” she says. “It’s basically because they don’t know how to integrate back into civilian society.” Signing up with a skilled trade union makes the process much easier. “They have that line-unit camaraderie,” Imamura says. “They take care of each other. It’s just like the Army.”