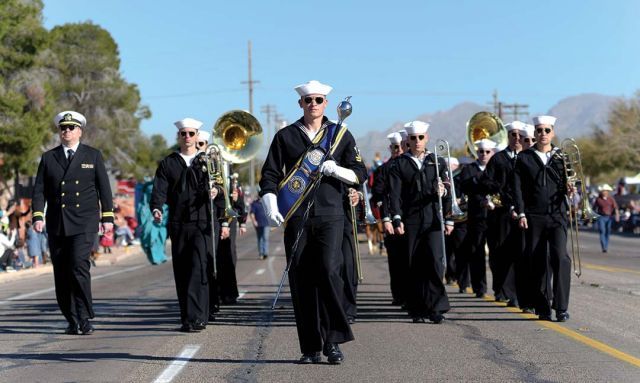 Music is nearly as much a part of U.S. military history as weaponry. Beginning with “Yankee Doodle,” martial songs have inspired the troops and preserved tradition. Service anthems – like logos, flags and uniforms – give each branch a special identity.

“The Marines’ Hymn” The history of the oldest and perhaps best-known U.S. service anthem is shrouded in mystery.

Writing to Marine Band leader Walter F. Smith in the early 1900s, Col. Albert S. McLemore – who coined the phrase “First to Fight” (included in the official song’s lyrics) and tried to pin down some facts about the song – acknowledged that the hymn’s origins have been “clouded by the passing of time and confused by oral tradition.”

For a military branch that touts its toughness, it’s ironic that the melody of the hymn’s verses is lifted from “The Gendarmes’ Duet,” an opera aria featured in “Geneviève de Brabant.” In 1867, composer Jacques Offenbach added the piece to a revised version that premiered in Paris.

How this melody came to be associated with the Marines isn’t clear. Even less is known about the original words. The opening lines, which chronicle two major battles in early Corps history, appeared on the Marine colors but in chronological order – unlike the song.

For the other verses, it’s said that an unknown Marine on duty in Mexico wrote them in 1847 after storming the Halls of Montezuma (Chapultepec Castle), as Corps lore contends, but the true author may never be revealed.

During World War I, Marines sang their hymn as they charged during battle. In one anecdote published in Stars and Stripes in August 1918, a wounded French officer who arrived at a U.S. field hospital praised a “dashing contingent” that fought alongside his unit.

“A lot of them are mounted troops by this time,” he said, “for when our men would be shot from their horses, these youngsters would give one running jump and gallop ahead as cavalry.I believe they are soldiers from Montezuma. At least, when they advanced this morning, they were all singing ‘From the Halls of Montezuma to the Shores of Tripoli.’”

After World War II, Marines developed the tradition of standing at attention when the song aired, but in April 2019 the Corps’ new drill and ceremonies manual required that all Marines not in formation or part of a ceremony “who when they hear the playing of ‘The Marines’ Hymn’ will stand at attention, face the music and sing the words.”

Given the tune’s catchy melody, succinct lyrics and tradition within the Marine Corps, that should be easy.

“Anchors Aweigh” Though universally associated with the U.S. Navy, this composition has no official standing.

The Navy’s acknowledged hymn is “Eternal Father, Strong to Save,” composed in 1861 in England and played at the Naval Academy since 1879. The song added a somber sonic note to the funerals of Navy men Franklin Delano Roosevelt, John F. Kennedy, Richard Nixon, Gerald Ford and George H.W. Bush.

Still, Lt. Charles A. Zimmermann’s composition overshadows this historic song in the hearts and minds of the entire branch.

Zimmermann served as the Naval Academy band’s beloved music director from 1887 until his untimely death in 1916. Midshipmen treasured the special marches he wrote for several graduating classes.

In 1906, Alfred Hart Miles and his classmates requested that Zimmermann write an “inspiring” number for the Class of 1907, “one with a swing to it so it could be used as a football marching song, and one that would live forever.”

The story goes that the two men sat down at the academy chapel’s organ and crafted the words and melody of “Anchors Aweigh” in time for the annual Army-Navy football game in 1906. Magnifying the composition’s mystique, Navy won and repeated the feat the next year.

Over the years, the song’s original words became outmoded.

In 1926, Midshipman Royal Lovell added a third verse that has arguably become the song’s most recognized stanza, and in 1997 Master Chief of the Navy John Hagan overhauled the words to downplay the football angle and take a more general tack. In Lovell’s verse, for example, the line “farewell to college joys” became “farewell to foreign shores.”

The title refers to the moment an anchor is hoisted so a ship can depart. In the original first verse, the sporting context is unmistakable: “Roll up the score, Navy / Anchors Aweigh / Sail Navy down the field / And sink the Army, sink the Army grey!”

“The Army Goes Rolling Along” While serving in the Philippines, Lt. Edmund Gruber and his horse-drawn field artillery unit found it difficult to navigate the rough terrain.

Expressing pride that the unit got the job done despite the mountains and dense jungle, Gruber – a relative of “Silent Night” composer Franz Gruber – debuted “The Caisson Song” in 1908.

Inspiration for the main refrain came after Gruber and a small detachment forged ahead during a maneuver to select the best route for his battalion. Surveying the scene on high ground, he heard one of the section chiefs shout out to his drivers, “Come on! Keep ‘em rolling!”

Gruber collaborated with two military colleagues on the composition, which opened with the line “Over hill, over dale / As we hit the dusty trail / And those caissons go rolling along.”

The song became popular within the Army and in schools across the United States, yet its provenance remained unknown. Many people thought it dated to the Civil War and that the composer had passed away.

During World War I, famed conductor John Philip Sousa composed “The Field Artillery March” based on Gruber’s tune, boosting its popularity but unleashing a volley of copyright lawsuits.

Tired of hearing the anthems of other branches at official functions, Army brass held a song contest in 1947, but it failed to produce a suitable selection. Next, they solicited music industry professionals for submissions, and of the 800 entries, the judges chose “The Army’s Always There,” which debuted at the inauguration of President Dwight Eisenhower.

The song failed to inspire, however, so in 1956 Army Secretary Wilber Brucker decided to revisit “The Caisson Song.” Special Services Division musician Harold Arberg changed the lyrics and wrote a musical introduction distinct from the main section (“March along, sing our song”) that is similar to the rarely heard musical prayer that opens “God Bless America” (“When the storm clouds gather”).

On Veterans Day 1956, the Army adopted this updated version of Gruber’s pre-World War I song, which is played at the conclusion of every official ceremony. All soldiers are expected to stand and sing.

In 1922, when the captain chased rum runners off the coast of the Carolinas and Florida during Prohibition, he wrote the lyrics of a song honoring the Coast Guard’s mission.

Five years later, as commander of the branch’s Bering Sea Forces, he teamed up with dentists Alfred Nannestad and Joseph Fournier on the remote island of Unalaska, Alaska, and the trio hammered out the song on a beat-up old piano owned by the wife of a fur trader.

The original first line, “From Aztec shore to Arctic Zone / To Europe and Far East,” echoes “The Marines’ Hymn.”

“The U.S. Air Force” Alaska native Robert MacArthur Crawford loved flying. During the Great War he applied to join the Army Air Service, which turned him down for being underage.

Crawford, who studied at The Julliard School in New York, also loved music and became known as the “Flying Baritone” because he routinely arrived at his performances in an airplane.

In 1937, legendary military aviation pioneer Col. Henry “Hap” Arnold figured that a special song would help differentiate his flyboys from the rest of the military, and attract recruits.

He persuaded magazine publisher and fitness guru Bernarr Macfadden to offer a $1,000 prize for the winner of a contest. After two years and 757 submissions, judges remained unimpressed. Arnold even solicited an entry from “God Bless America” composer Irving Berlin, but the tune fell flat.

In 1939 Crawford debuted his entry, “The Army Air Corps,” at the Cleveland National Air Races. It became an instant hit and is one of the few songs in history to win a contest and also achieve widespread popularity.

Arnold printed the rousing song’s lyrics inside uniform hats, in service manuals and in planes, though the title changed in 1947 when the branch achieved autonomy (it’s also known as “Wild Blue Yonder”).

The tune appeared in several movies released during World War II, and in 1971, the all-Air Force crew of Apollo 15 broadcast a snippet of the anthem to the world as the lunar module lifted off from the moon’s surface.

Today, Crawford Hall at Langley Air Force Base in Virginia, the country’s oldest air base, honors the man who composed the branch’s official song.