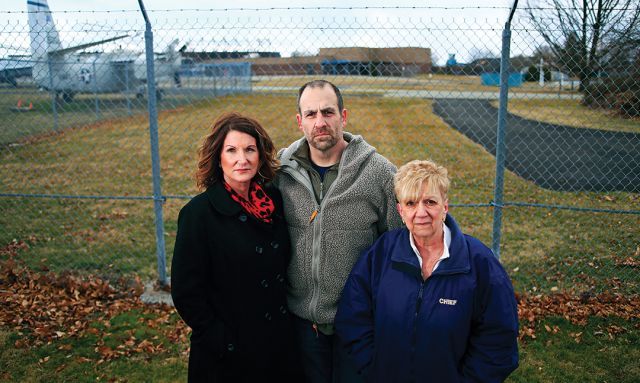 For years, Wade Woxland, Paul Lutz and Lisa McCracken used the water at Naval Air Station Willow Grove in Pennsylvania without a second thought. They didn’t worry on days they arrived at work to find the drinking fountains shut off and covered in plastic,considering it an inconvenience instead of a warning. They filled their water bottles in bathrooms, showered in the base gym, swam in the base pool and ate at the base galley. Until the people they served with started developing strange cancers and other diseases. Until it was too late.

McCracken contracted breast cancer. Lutz has multiple myeloma. Woxland died just after Christmas 2013, 18 months after he was diagnosed with five different types of cancer – including one so rare that only 50 cases had been reported in the United States. His wife, Nicole Gitt-Woxland, who also served at the base, has an autoimmune disorder. Until they were diagnosed, none of them realized that Willow Grove’s drinking water had been contaminated by toxic firefighting foam chemicals, often referred to as PFAS.

“No one ever said ‘Don’t drink the water,’” Lutz says, noting that questions were not asked when the drinking fountains were shuttered because the joint Navy/Air Force Reserve base was old. “Come to find out it’s been a Superfund site since 1995.” Lutz began making a list of his colleagues as they became sick or died. He gave up when the tally reached 119 – and that was years ago.

“Imagine the hundreds of thousands of people on the base who were exposed,” Gitt-Woxland adds. “I don’t think we’ve seen the implications of what was done there – or the cover-up.”

Willow Grove is one of hundreds of current and former U.S. military bases where servicemembers and families were potentially exposed to PFAS-laced drinking water. Not to mention residents of nearby communities whose drinking water was also polluted by firefighting foam chemicals. But the work to assess the contamination, much less clean it up, has barely begun.

‘Forever chemicals’ PFAS are a class of fluorinated chemicals used in aqueous film-forming firefighting foams invented with the help of the Navy and widely adopted by the U.S. military beginning in the 1970s, says Remington Nevin, a preventive and occupational medicine physician who served with the 82nd Airborne in Afghanistan. PFAS were also used in products ranging from non-stick cookware to stain-resistant carpet and specialty clothing.

Because these fluorinated compounds don’t break down in soil or water, they are often called “forever chemicals.” They are linked to a variety of cancers, autoimmune disorders, birth defects and other health issues. An environmental specialist at 3M, which manufactured the toxicants, called them “the most insidious pollutant since PCB” in his March 1999 resignation letter, according to the Detroit Free Press.

“The toxicity of this class of substances is undeniable, and their persistence and accumulation within the body should be cause for significant concern,” says Nevin, who studied the health risks during his occupational medicine fellowship training at the International Association of Fire Fighters. Long-term consumption of drinking water contaminated with high levels of the toxicants “poses an unacceptable risk to human health,” he adds.

Yet there are no federal regulations limiting PFAS pollution, says Genna Reed, lead science and policy analyst for the Union of Concerned Scientists. “That’s one reason we don’t have any idea of the number of sites that are contaminated.”

In 2016, the Environmental Protection Agency set a PFAS advisory limit of 70 ppt, far higher than many scientists believe is safe for human health. Some states are moving to set stricter limits. And the federal Agency for Toxic Substances and Disease Registry has recommended PFAS limits as low as 7 to 11 ppt.

The scope of PFAS pollution is staggering. It’s turned up in Strawberry Lake in Michigan, where residents have been warned not to eat fish or touch the foam that’s built up from PFAS contamination. It has tainted the baptismal pool and drinking water at a Pentecostal church in Sacramento, Calif. PFAS problems have prompted the military to drill monitoring wells near places such as Naval Air Station Whidbey Island in Washington state, and pay to build new water-treatment plants near Peterson Air Force Base in Colorado.

Current and former military bases have some of the nation’s highest PFAS levels, according to an analysis by the Environmental Working Group (EWG). The former England Air Force Base near Alexandria, La., is thought to have the worst contamination with concentrations measuring 20.7 million ppt. At Willow Grove, where the Air Force is providing $2.8 million toward containing the contamination and filtering drinking water, PFAS levels were measured at 86,000 ppt – 7,818 times greater than the safe-exposure level, according to EWG.

In 2017, DoD estimated 401 current and former U.S. military bases were contaminated with PFAS. The total has now jumped to 651 military sites with potential firefighting foam pollution, according to a new Pentagon report released in March. It’s telling that DoD can’t provide a conclusive number, Reed says.

“That speaks to the real need for meaningful federal action – for testing, remediation and helping people who have been exposed,” she says. “This is a legacy contaminant that has been used on military sites for decades. Military families and other affected communities have the right to know if the water they drank for decades was contaminated with PFAS and posed significant risks to their health.”

U.S. Rep. Elissa Slotkin, D-Mich., a former Pentagon official, called for accountability in a 2019 letter to Defense Secretary Mark Esper. “We must address these issues as environmental security is, in fact, homeland security, and it is clear PFAS is a threat to our safety,” Slotkin wrote. “When residents of the Great Lakes state, home to the greatest concentration of fresh water in the world, cannot hand our kids a glass of water with confidence that it is safe to drink, that is a threat to our way of life.”

Hangar full of foam It’s easy to see how the toxicants could have made their way into drinking water at Willow Grove, now Horsham Air Guard Station. Lutz recalls the firefighting foam system accidentally going off at least twice during the 12 years he was stationed at the base. “I’ve seen the hangar 10 feet deep in foam,” he says. “They don’t say, ‘Put on a Tyvek suit and a respirator.’ Instead, there are kids out there in dungarees with brooms and squeegees sweeping the foam into drains.”

Still, Lutz knew nothing about the groundwater contamination until an ice hockey injury sent him to the doctor. A back specialist found a tumor on his spine in 2015, a year after he retired from the Navy. VA has acknowledged that his cancer is tied to his service at Willow Grove, he says. After surgery, chemo, radiation and two stem-cell transplants, his multiple myeloma is in remission. But there is no cure.

“I was diagnosed with cancer at 44,” Lutz says. “I took a bullet for our country from our country. I could have protected myself – but if the people charged with taking care of me won’t tell me ....”

Likewise, McCracken was aware that the Navy used firefighting foam at both of her duty stations – Naval Air Station North Island in California and then Willow Grove. “I didn’t know how bad it was when it got in the drinking water,” she says. McCracken discovered she had breast cancer in 2004 and left the Navy in 2006, not wanting to burden the military with five years of monitoring for the possibility of her cancer’s reoccurrence. But she was never able to make sense of her disease. “There is not a stitch of cancer in my family,” she says. “I never smoked or drank or any of that. No drugs. No factor that led to any of this.”

McCracken started connecting the dots after former Willow Grove colleagues faced catastrophic illnesses. “Some of the healthier people I knew would get rare cancers, and then they were dead,” she says. “It was one after another after another.” She researched firefighting foam and concluded that PFAS caused her cancer. Her journey has unsettling similarities to her father’s experience as a Blue Water Vietnam War veteran who deals with the effects of Agent Orange exposure.

Although she’s now cancer-free, McCracken worries about her stepdaughter, who was stationed at Whidbey Island for four years. And she’s alarmed at the lack of awareness.

“When you’re in the military, you don’t say, ‘Let’s look at the list of Superfund sites’ when you get your next duty station,” she says. “I wanted to go to Willow Grove because I wanted to live back east again. If I had known about PFAS, I probably wouldn’t have done it.”

Health nut The Woxlands became aware of Willow Grove’s toxic hazards only after Wade was diagnosed with the first cancer in 2012. An ultra-healthy bicyclist who rode 500 miles the month before doctors found a tumor in his bladder, he was optimistic about his recovery. Then specialists discovered that the disease was a rare cancer that normally attacks the stomach. Only 50 cases had been identified.

Wade underwent intensive chemotherapy and bladder surgery, to no avail. The couple went to M.D. Anderson Cancer Center in Houston hoping to find more treatment options. Instead, they learned that Wade had four additional types of untreatable cancer and nine to 18 months to live. The more he thought about it, the more Wade was certain his condition was connected to his time at Willow Grove. The couple went home to Denver and contacted members of his squadron.

“We started hearing about all the people he was stationed with who had died of brain cancer, colon cancer, breast cancer,” Nicole says. She created a Facebook group for people who served at the base and asked people to post if they knew anyone with a cancer diagnosis.

“An astronomical number of people responded,” Nicole says. “It was crazy. And every month, it seemed two or three people passed away who served with us or were in another squadron at Willow Grove.”

Wade died Dec. 28, 2013, and Nicole handed responsibility for the Facebook group to Lutz and another veteran a few months later. “I had three kids who were mourning,” Nicole says. “There was no way I was going to be able to take care of that.” Eventually, the Facebook group became less about people who were falling ill and more of a memorial site for people who died.

The Woxlands filed a VA claim while Wade was still alive, without success. After Wade died, Nicole filed a new claim as a survivor, hiring a medical specialist and other experts to help her make the case. After three frustrating years, she prevailed and believes it’s the first time VA granted 100 percent service connection post-mortem for PFAS exposure. Nicole hopes that sets a precedent for other veterans and families who were exposed to PFAS.

Now Nicole is pushing for legislation that would automatically grant servicemembers who serve at a Superfund site a zero percent VA disability rating as they leave the military, so they can more readily access care and benefits when they are stricken with service-connected health problems.

Meanwhile, she worries what the PFAS exposure means for her children – particularly her youngest. “It’s scary,” she says, recalling the years their family lived in military housing near Willow Grove. “We used the tap water to make baby formula for him.”