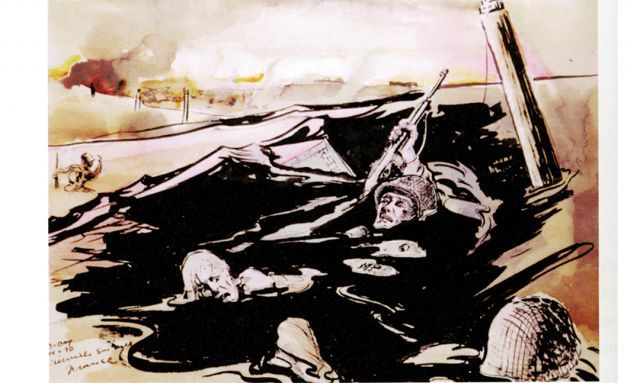 Maxine Giannini says she never began tofully know her husband until six months after his Jan. 31, 1993, death at 73 from pulmonary fibrosis. “It’s a terrible thing,” she says of the illness. “You die one breath at a time.” In those final breaths, the New Jersey artist asked his wife of 37 years to wait at least six months before entering his studio. “It’ll be too much for you,” he told her. The next day, Ugo Giannini was gone.

A half-year later, Maxine went in and saw on the easel his final work in progress, titled “H-Hour.” In a separate folder, she discovered 27 drawings that “seared into my brain ... ‘I can’t believe what I am looking at.’” Their son knew of the drawings, which chronicled the bloody, grueling campaign from Omaha Beach to the European theater’s closing curtain, but she had no idea they existed. Among his effects was a bundle of letters tied together with a blue ribbon. They were written during his time in service, many of which were returned to him when he came home. Dozens of paintings revealing the war’s long-term effects filled the room.

Certain details of his life, like the Normandy invasion and the horrors that followed, were not openly discussed. Maxine’s brother fought at Iwo Jima, but their conversations even when the family got together did not include World War II. They spoke of other things, the war silently simmering inside them, except when Ugo would erupt to shout warnings to soldiers crossing the beaches of his nightmares. He would not sit in an exposed position in a concert hall. City traffic drove him mad.

His behavior was something she came to accept, not fully understanding what stirred it.“I met him after he died, on a different plane.”

The water filled my ears and nose. It was cold, dark and silent below. I clutched my rifle. Should I let it go – to free my hands? The sea was all around. Fifty, 60 yards ahead was the land. A worm’s eye view – my body instinctively moved towards it.

Ugo Giannini’s life can be divided into three chapters: before the war, during it and afterward.

He grew up in East Orange, N.J., the strapping son of Italian immigrants. “Very secular and interior family,” Maxine explains. “They lived through their mama’s cooking. She was an extraordinary cook. She was also an opera singer. His father was a tailor. They spoke Italian.” Not until kindergarten did young Ugo speak English.

The family struggled through the Depression. “They moved 15 times,” Maxine says. “(Ugo) came home one day, and ... all the furniture had been repossessed. There was just a coffeepot left, that she cooked on. The cooking and the mother held them together.”

His artistic talent was apparent from an early age, and high school teachers encouraged him to pursue it. He studied at the National Academy of Design in New York, illustrated catalogs for a furniture company and landed an advertising position for Sears in Philadelphia.

The draft changed all that in 1942 when, at 23, Giannini’s training switched to the fine art of firing a Browning Automatic Rifle as a soldier in the 175th Infantry Regiment. “The life of a BAR man is about 10 minutes,” Maxine says. “While they were in England waiting to land (at Normandy), they had the men isolated in camps. To keep them amused, they had boxing matches. He was in a boxing match with the champion of the 175th. He was a lefty, gave him an uppercut with the left hand that threw (his opponent) across the tarp and broke his ankle in one blow. The guy was out like a light. Ugo thought, ‘I am in big trouble.’ They called him into headquarters in the morning. They said, ‘You’ve got a choice: either you’re going to box for the 175th and represent us, or you can be an MP.’ He figured, as an MP, he could always go to the kitchen. He was always hungry. That put him on Omaha Beach, that one blow.”

Suddenly a 29th Division MP, Giannini violated regulations by stuffing a sketchbook, pens and pencils into his pack before the June 6, 1944, landings. Of the 37 from his platoon who jumped into the surf at Omaha Beach that morning, six survived. He barely made it through the water himself, weighed down by his gear, bullets whizzing past him, a scene he would immediately put on paper.

“That morning, he climbed into a crater in the Vierville Draw,” Maxine explains. “On the left side, there was a crater made by naval bombardment, and he made the only drawings (of the D-Day invasion as it happened) in the world. He climbed into the crater and saw the whole invasion coming toward him. I have the drawings here.”

Along the edges of the paper are stains from the bloody seawater. She calls it the “DNA” of the invasion.

What followed – from soldiers trying desperately to cross the beach to a night patrol that took him past the decapitated head of a friend months later – is a chronology of images and words that steadily descend into a condition he had for the rest of his life. “It wasn’t mentioned, post-traumatic stress,” Maxine says. “There was no word for that.”

I walked slowly, dragging my unwilling soul with me and forcing it to inhale the death odor. I was alone, searching for my comrades – 37 men who were hurled ashore yesterday morning. (Or was it years ago?)

Deadly combat was continuous over the first six weeks after D-Day. By the time St. Lô was secured on July 18, thousands from the 29th Division were killed, wounded or missing. Survivors were battle-hardened. “Any man who was in combat over 21 days was called an old man,” Maxine says, peering at one of the post-D-Day soldier portraits. “They changed. You see the ravage of war in their faces.”

Securing movements inland from the beachhead and guarding German prisoners who had vowed to fight to the death were among the MP’s duties. The 29th would fight the Germans out of the coastal area and lead the push into German-occupied St. Lô, a critical objective to gain control over northwestern France. When the fighting was done at St. Lô, “nothing was left standing,” Maxine says, viewing a drawing of two MPs helping a wounded soldier, dated July 18, 1944. “Ugo couldn’t understand why the French loved us. We were wrecking their homes.”

Nearly 4,000 soldiers from the 29th were killed in the march to victory in Europe. More than 15,500 were wounded. Replacements came and went. “They were called un-blooded troops,” Maxine says. “An un-blooded troop is a troop who has not been in combat and is young. And those were the only troops they could send into that situation. These were kids. And kids are invulnerable ... nothing is going to happen to them.”

The so-called old men, like Ugo Giannini, would soon assure them that something indeed, something life-changing, was going to happen to them.

These things will be with me in a part of my memory I wish to destroy.

“Drawing D-Day: An Artist’s Journey Through the War” was first published in 2013, and a second edition came out from Dover Publications in 2019, in recognition of D-Day’s 75th anniversary. The book, as its title suggests, is a chronological compilation of letters, poems, drawings and paintings by Ugo Giannini, with interspersed prose by his wife, researched and written after his death.

Central to the book are letter exchanges with family members and a sweetheart at home, referred to by the pseudonym “Rene.” As the war progresses, he writes frequently to her from the front, often to express frustration that her replies are too infrequent. “Everyone is receiving mail quite regularly again – but me!” he wrote a month after storming Omaha Beach. “The last I heard from you was May, and here it is July 7.”

Letters to Rene, his parents and his brother differ. To his parents, they were not to worry. His brother Walter received something in between – general explanations of the war’s progress with no details and questions about their brother Harold, who was fighting elsewhere in Europe. To Rene, his words are a roller coaster of despair and loneliness occasionally interrupted by elation over a long-awaited letter.

The 29th Division fought its way through Tessy-sur-Vire, where hedgerow-hemmed farm fields concealed deadly German machine gunners. By mid-August, the division had spent 63 days in continuous combat and had been at the point of the spear to secure Normandy. During this time, a flurry of letters from Rene caught Giannini off guard.

Here they are, three of the most unlovely letters ever written, arriving in order Aug. 7, 8 and 10 ... I resent fiercely your implications that I’m having “a good time with the madamoiselles.” At the front there is only death and horror – no madamoiselles.

Next up was Brest, some 200 miles south in Brittany. As many as 40,000 elite German paratroopers defended the fortified seaport that was deemed essential to supply the Allies. The fighting there was later described in a 29th Division history this way: “Landing on D-Day was a picnic compared to Brest. Brest received the personal order from Hitler to hold for three months.”

There, Ugo Giannini began to realize something was happening to him. “I had suffered one week of battle neurosis while we gave Brest a work over – the Jerries turned their 300mm naval guns at us, two landed in my back yard, a huge chunk of shrapnel tore a window in my tent ... To make matters worse, our own P47s bombed and strafed our area.”

By the time the fighting was over in Brest, so little was left that it could not be used as a supply port. In the thick of that fighting, Giannini received better letters from Rene, and his replies expressed both a longing to come home and concern over his mental condition.

I can only repeat what I have said over and over – wait for me – because soon, soon, this must end ... I try as much as humanly possible, every day to outlive the grievous fears. Only lately, I have become inclined to nerves. But they are based on long strain, and I’m sure I’ll be feeling fine directly.

“By the time he hits December and January, he’s finished,” Maxine says, flipping past the hollowed-out faces and devastated buildings her husband had sketched. “Twenty-one thousand men were replaced. He said he was a stranger in his own unit.”

One collage of sketched faces is captioned “Thousand Yard Stare.” “That’s a human being having a hell of a hard time,” she says. “They didn’t wash themselves for two months. They slept on the ground. They started out as these kids who were going to conquer the world. They are hungry. They are dirty, and they are horrified.”

He could draw quickly, in one instance while belly crawling 20 feet behind another soldier. He drew German prisoners and images of himself performing checkpoint duties and buzzing through a war-torn village on an Army-issued Harley-Davidson.

The division moved into Holland and prepared to cross the Siegfried Line – with its “dragon’s teeth” obstacles Germany had installed to slow down the Allied forces. Casualties in the 29th had exceeded 14,500 by mid-October. Hitler had instructed all civilians to take up arms against the coming Americans.

Everything is suspended in air, and we pluck indiscriminately at the thoughts – many times leaving out their counterparts. I’m tired and not sure if I have the right even to think.