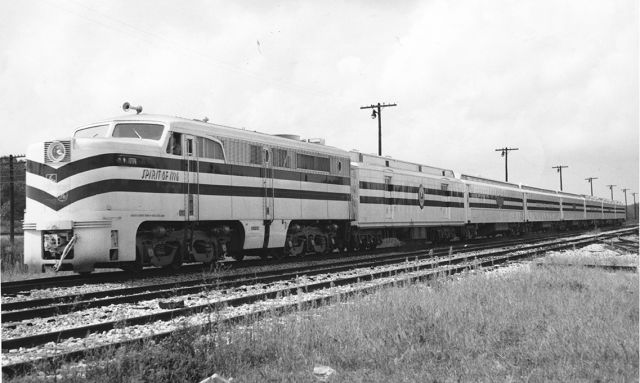 “More than a rolling museum, the Freedom Train was an educational and patriotic program that provided a vivid reminder of the greatness of America’s heritage to a nation still recovering from economic depression and world war.”

Following the Allies’ victory over Germany, Italy and Japan in World War II, all who had sacrificed and made do on the home front since the Great Depression expected relief and their piece of the American dream. Instead, millions were laid off from virtually all the major industries as emergency war production shifted back to civilian consumer needs.

As the Great Strike Wave swept through the country, refugees from war zones flooded in. With them came GIs, returning from the battlefields to look for work, housing and education promised by the GI Bill of Rights – which, transformational as it was, did not promise jobs. Rationing eased as goods trickled back to store shelves. Black soldiers who had fought for their country expected better treatment at home but found segregation still in place.

President Harry Truman, a Democrat, faced an all-Republican Congress, resulting in frequent legislative logjams. Amid this confusion, communism and other radical political ideologies strived to gain a foothold.

William Coblenz, an assistant director in the Department of Justice’s Public Information Division, spent his lunch hours at theNational Archives. Lamenting how few Americans were able to visit Washington and see the nation’s founding documents, he thought about how a display of America’s struggles and sacrifices for freedom would make a powerful impression. If only the entire country could see the tangible, irreplaceable documents that inspired a legacy of liberty and unity. If Americans can’t all come here, Coblenz reasoned, let’s take the documents to them. What was common to nearly every city and town? A railroad station, to be visited by a traveling museum of historical documents.

Coblenz took his idea for a converted Liberty Train passenger car to his boss, Attorney General Thomas Clark. The Treasury was broke, so Clark made a
few calls to creative business owners, entrepreneurs, movie moguls, bankers, industry leaders and the Advertising Council. In a few weeks, the nonprofit American Heritage Foundation was formed with a board of directors and deep pockets. Coblenz’ modest Liberty Train passenger car concept became the rock star of its time.

The Freedom Train was a seven-coach behemoth hauled by a 2,000-horsepower ALCO diesel locomotive. Three of the passenger cars were transformed into armor-plated coaches – bulletproof and fireproof, with steel-covered windows forming one long aisle displaying 132 historical documents and iconic objects. The four remaining cars were a baggage-utility coach and three sleeper-stateroom coaches to house the accompanying guard and maintenance crew.

The train would crisscross the United States – 33,000 miles – for 16 months, stopping for up to five days each at 300 cities and towns throughout the 48 states. The trip would be preceded by, and followed up with, planned patriotic rededication programs of local and national broadcast media events, collateral print packages and parades themed around the motto “Freedom is Everybody’s Job.” Towns throughout America bought into it, estimating roughly 10,000 visitors per day at each train stop.

Clark had an idea for guarding the documents, outlined in a letter to Navy Secretary James Forrestal:

Dear Jim,
... this train is to bring to the people of the United States more than one hundred and fifty of the most sacred original documents of our history ... the Freedom Train will need an armed guard to protect its precious and irreplaceable cargo. I am sure you will agree with me that the Marine Corps of the United States Navy is highly qualified for this job and this letter is to request you to direct that this outfit be given the assignment.”

Months of furious activity commenced. On Sept. 5, 1947, at a trackside reviewing stand of civic officials, factory workers, designers and the local press next to the American Locomotive Company’s (ALCO) Schenectady, N.Y., shop, a state-of-the-art diesel engine rumbled through a paper curtain to brass-band fanfare. The applause quieted to the tread of marching men and then, in close-order columns of four, came rank on rank of 27 Marine sergeants and corporals, their dress blues decorated with rows of battle, theater and service ribbons. Led by Lt. Col. Robert Scott, they marched in perfect step along the side of the huge engine. Applause exploded. No one doubted the Freedom Train was in good hands.

As Sgt. Henry Steadman wrote in his book “One Marine’s Experience,” his selection as part of the detachment for the Freedom Train “was one of the best times of my career. It was a great honor to be one of only a few sergeants and corporals selected from across the Corps for this assignment.

“The detachment’s primary mission was the security of the documents. The Marines also played the role of ambassadors, explaining the history behind the exhibits. They also kept watchful eyes outside the train, providing crowd control when necessary. People came in one way and went out the other, always under close supervision of the Marines.

“They had a revolving watch, standing two watches during the day. A special detail armed with .45-caliber pistols stayed in the cars at night while the train traveled to its next destination. There was no mess aboard the train so the Marines were paid $3 a day to eat in town. There was also no laundry facility, so they hung their laundry bags outside their doors at each stop. Their laundry was taken (by three resident Union porters) in the morning and, by the time they left the city, it was cleaned and pressed, and hanging outside their doorways. Once we closed the exhibits, no one was allowed in the cars.”

Steadman recalled an incident in which the FBI requested to board the train after hours. The Marines stood firm, insisting the FBI had to get permission from the detachment commanding officer.

Though the Marines lived in tight quarters and worked a tedious schedule, they still found time to enjoy themselves. “We all lived together in one club car for 17 months,” Steadman wrote. They also secretly kept a detachment mascot: a cocker spaniel puppy named Reddy. At least half the detachment claimed ownership. “For six months, we fed Reddy from our brown-bag lunches.”

The collection of historical documents and objects was housed in custom-built, sealed cases fronted by hardened, shatterproof Lucite secured with bronze screws and monitored for humidity and temperature. Four thousand pounds of ice were regularly loaded onboard to furnish air conditioning, and automatic smoke alarms were installed. A faulty electrical circuit caused a small fire during a routine overhaul; one Marine suffered smoke inhalation.

A newspaper reporter wrote that stepping into the Freedom Train’s long aisle was like “entering a church.” The soft green walls and carpeted floors hushed the crowds. Tears were common in the last coach, which featured reports from World War II battlefields where local sons and daughters had served and some had died.

The Marines were well drilled and knowledgeable of their encased and mute charges. Each Marine was ordered to quietly urge the people to “keep moving, please,” allowing roughly six seconds of gazing at each document. Some viewers became transfixed, mesmerized by George Washington’s handwriting on the pages of his personal account book. The copy of Abraham Lincoln’s Gettysburg Address from which the 16th president had read. The signatures of Adm. Fleet Chester Nimitz, Gen. Douglas MacArthur, Gen. Anthony McAuliffe – who replied “Nuts!” to a German demand for surrender at Bastogne – and President Frankin D. Roosevelt, who held the country together. Visitors came with fresh memories of graveside services: a bugle sounding taps, a folded flag, a catch in the throat for those fatalities whose remains had been brought home. Some of their loved ones had perished in the explosion of an artillery shell; others vanished into the cold type of a missing-in-action report.

Many Marine ushers who manned the third coach had served on those bloody battlefields and were still haunted by the death, rot, disease, boredom and terror. Day after day, city after town, the parade of memories passed.

At every stop, the Marines were treated like royalty. Free taxis sped them to restaurants where meals were on the house. Scott was adopted and feted by every town council. Off-duty Marines were dogged by young people and curious adults. The travels of the Freedom Train left behind a love affair with the Corps and memories that would last a lifetime.

On Jan. 16, 1949, the Freedom Train rolled into Washington, D.C, for the last time, and remained through Truman’s inauguration Jan. 22. The Marine honor guard packed their barracks bags and said their goodbyes. Of the 40 million Americans who saw the Freedom Train, none ever forgot it or its mission: freedom is everybody’s job.

Gerry Souter and his wife, Janet, are the authors of “Selling Americans on America: Journey Into a Troubled Nation” (Sartoris Publishing Group, 2019).