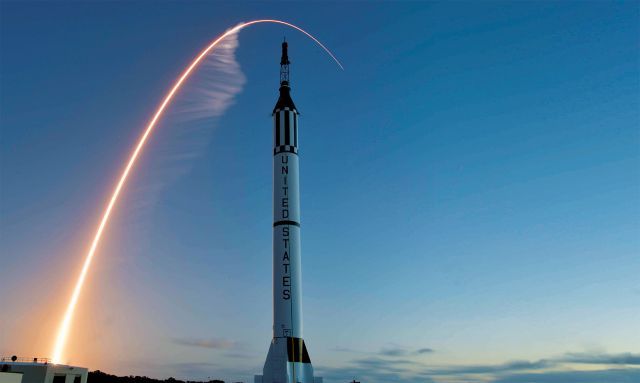 In the latest example of the White House’s determination to expand America’s reach and role in space, it has directed the Pentagon to “develop, operate and maintain space-control capabilities to ensure freedom of action in space and, if directed, to deny such freedom of action to adversaries.”

NECESSARY After Trump announced in early 2018 that he was ordering the Pentagon “to immediately begin the process necessary to establish a Space Force as the sixth branch of the Armed Forces,” several media outlets panned the idea as a “space farce.” Some dismissed it as ridiculous. Netflix announced a comedy series mocking the very notion of “a new branch ... to defend satellites from attack ... or something.”

What the giggling pundits don’t know is that a military branch dedicated to defending America’s vulnerable assets and growing interests in space is neither a new idea nor a farce.

Long before Clinton ordered the Pentagon to develop space-control capabilities and ensure freedom of action in space, President John Kennedy in 1962 called for America to occupy “a position of pre-eminence” in space and warned of “hostile misuse of space” by adversaries. President Ronald Reagan in 1982 declared that the United States would “oppose ... prohibitions on the military or intelligence use of space.”

In 2001, a congressionally appointed commission led by Defense Secretary Donald Rumsfeld (who headed the Pentagon under President Gerald Ford and President George W. Bush) envisioned the establishment of a Space Corps within the Air Force to help “avoid a space Pearl Harbor.”

In 2016, John Hamre, deputy secretary of defense under Clinton, raised the possibility of a “space service” within the Air Force.

In 2017, U.S. Reps. Jim Cooper, D-Tenn., and Mike Rogers, R-Ala., called for the creation, under the secretary of the Air Force, of a new Space Corps “as a separate military service.”

In early 2019, a group of defense officials led by Defense Secretary William Perry (who headed the Pentagon under Clinton) urged the establishment of a new military service to “deter conflict from beginning in or extending into space, and, if deterrence fails, to defeat hostile actions and protect our economic and national-security interests.”

In June 2019, NATO unveiled plans to recognize space as an operational domain of warfare. A month later, France carved out a space command within the French air force. By December, Britain’s new government announced creation of a UK space command. That same month, the U.S. Space Force (USSF) was born, following the passage of the 2020 defense bill.

In short, Trump merely steered the Pentagon to a destination many other policymakers had advocated for years.

DEPENDENT The reason Congress and the president agreed to create a new military branch – the first since the Air Force separated from the Army in 1947 – is twofold.

First, as Lt. Gen. David Buck observes, “Space is critical to the American way of life.” Yet most Americans, having lowered their gaze from the heavens to hand-held devices, are oblivious to how much we depend on space for communications, commerce, air and ground transport, emergency services and national security.

Of the 2,218 operational satellites in orbit, 1,007 are owned and operated by U.S. firms, government agencies or military units. A 2019 Space Foundation report reveals a global space economy of $414.75 billion – up from $261.6 billion a decade earlier – with more than 183,000 Americans employed in the space workforce.

“There is no soldier, sailor, airman, Marine anywhere in the world that is not critically depending on what we provide in space,” says Gen. John Hyten, vice chairman of the Joint Chiefs and former commander of Space Command.

Notice Hyten didn’t limit that mission to helping airmen and astronauts. Every branch is dependent on space – and growing increasingly dependent.

Consider the Army. No other branch is more closely associated with terra firma. Yet as the Lexington Institute’s Loren Thompson points out, a typical Army armored brigade “contains over 2,000 pieces of equipment that rely on space assets to function.”

The same applies to the Air Force and Navy.

“The loss of space would mean naval battles would in many ways be like the game of Battleship, where two sides would struggle to even find each other,” adds New America’s Peter Singer.

Creating a military branch focused on space isn’t about waging war in the heavens, but the very opposite: preventing war and deterring enemies.

According to Air Force Chief of Staff Gen. David Goldfein, “we’ve never come out winning” a wargame in space. That helps explain why Gen. John Raymond, Space Force’s chief of space operations, argues it is a “national imperative that we posture ourselves to deter any conflict that would extend to space.” If deterrence fails, Raymond’s new branch will give America a better chance to “fight and win.”

VULNERABLE That brings us to the second reason the Space Force was created.

“If you control space, you can also control the land and the sea,” says Gen. Xu Qiliang, vice commander of the People’s Liberation Army’s Central Military Commission.

Toward that end, China has created a “strategic support force” responsible for satellite launches and operations involving satellite-on-satellite attacks, according to RAND.

A 2019 government report notes that Beijing views space as a critical U.S. military and economic vulnerability. Pentagon reports add that China has the world’s most rapidly maturing space program, and is developing doctrines geared toward damaging and interfering with enemy reconnaissance and communications satellites. China is also acquiring technologies to accelerate counter-space capabilities, including satellite jammers and anti-satellite (ASAT) weaponry.

China has conducted at least three ASAT tests in the past decade. One expanded the amount of debris in orbit by 10 percent. U.S. spacecraft, astronauts and satellites will have to navigate that minefield forever. (India, perhaps signaling China, conducted its own ASAT test in 2019, creating another minefield of debris.)

Russia is conducting ASAT tests even more frequently than China. Moscow’s April ASAT test is believed to be its ninth test of a “direct ascent” ASAT over the past several years. (Direct-ascent ASATs are ground-based missiles.) Raymond called the test “another example that the threats to U.S. and allied space systems are real, serious and growing.”

In addition, the Russian military has deployed a number of satellites capable of “rendezvous and proximity operations” – military parlance for maneuvering around other satellites to monitor, disrupt and/or disable them. In February, Raymond revealed that two Russian satellites were shadowing a U.S. Keyhole satellite in what he called “unusual and disturbing” behavior. He recently reported that in 2017 Russia deployed a satellite that “launched a high-speed projectile into space” – a satellite built for space-based ASAT attacks.

To remove any doubt about how Moscow intends to use its space assets, Russia announced in 2015 that its air forces, anti-air and anti-missile defenses, and space forces would now be under a unified Aero-Space Forces.

In short, Russia and China are posturing their militaries to defend their interests, expand their capabilities, target their adversaries and exploit U.S. vulnerabilities in space.

TIGHT-KNIT America’s newest branch is modeled after the tight-knit Navy-Marine Corps relationship rather than the Army-Air Force divorce that followed World War II.

Space Force leaders are still mulling what to call those personnel, but they will definitely not be called “spacemen” or “space cadets,” according to Lt. Gen. David Thompson, vice commander of the Space Force. Military.com reports that “guardians” and “vanguards” are possibilities. Perhaps the best option is “sentinels,” which has been circulating in Air Force and Space Force circles.

Raymond, the first member of the U.S. Space Force, was sworn in as chief of space operations and Space Force commander in January. When the branch celebrates its first birthday, he will take a seat on an expanded Joint Chiefs of Staff.

“Members of the U.S. Space Force detected those missiles at launch and provided early warning to our forces,” Thompson reports. The Space Force is deploying and manning a suite of new systems, such as the ground-based jammer recently activated at Peterson, which is designed to block satellite-network communications by hostile regimes.  And the Space Force is tracking satellites, supporting military launches and operating the U.S. constellation of GPS satellites on which most Americans depend. Indeed, the Space Force reports that it’s responsible for the launch, on-orbit operations and landing of the super-secret X-37B unmanned spaceplane.

PREPARED A new military branch with new facilities, new billets and a new bureaucracy costs money. All forms of national defense carry a cost. The Congressional Budget Office estimates $3 billion in initial costs, plus $1.3 billion in additional spending annually. That’s not an insignificant amount, especially in an era of post-COVID-19 belt-tightening.

Of course, if the nation’s space-dependent communications systems, transportation systems or financial system – our very way of life – were to be crippled or held hostage by an adversary, media types wouldn’t be giggling or filming spoofs about the Space Force. And the American people wouldn’t be asking policymakers, “Why did you spend so much on the Space Force?” Instead, they would be demanding, “Why didn’t you do more to protect America’s assets and interests in space?”

“Snapping to the question of cost misses the whole point that our adversaries are rapidly catching up to us,” Undersecretary of Defense for Personnel and Readiness Matthew Donovan argues. “How about the cost of losing a war? That may be the cost we should be talking about.”

Indeed, as a rather well-known American general once observed, “There is nothing so likely to produce peace as to be well prepared to meet an enemy.” George Washington’s wise counsel applies whether the enemy lurks on land, at sea, in the sky – or in space.