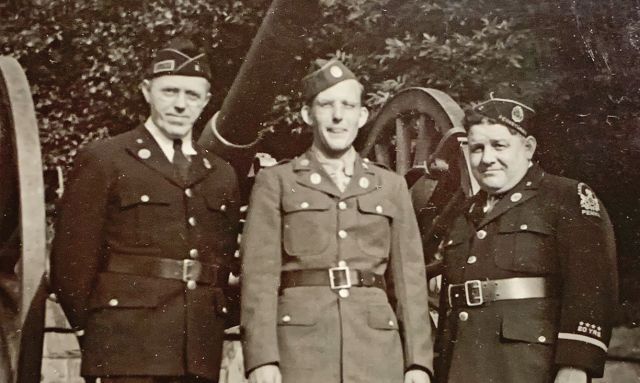 The American Legion had been divided about World War II prior to the attach at Pearl Harbor. Many veterans – having known the horrors of combat in the muddy, poisonous trenches of Europe two decades earlier – believed the United States should stay out of it. But by the fall of 1941, as the Nazi regime continued spreading westard, isolationism became an unlikely proposition.

In his acceptance speech as leader of the nation’s largest veterans organization, just months prior to U.S. entry in the war, Lynn Stambaugh of North Dakota observed that a new kind of military conflict was gathering on America’s horizon, one that would be fought on distant lands, at sea and in the air, with weapons, planes and bombs never before deployed. Should the United States enter the fight, unprecedented home-front support would be needed. “It is your will, Legionnaires, that in the crisis which currently confronts America, The American Legion shall take its place in the battle lines that are forming,” he said upon election. Within months, Stambaugh would be listed by the Nazis as an “enemy of the Third Reich.”

The American Legion indeed was destined to return to wartime service, at home and abroad. Many doughboys of the Great War would re-up as officers and help lead a new generation, or fill voids in local communities, in law enforcement, firefighting, emergency medicine and civil defense. More than 16 million American men and women would become members of the U.S. Armed Forces between Dec. 7, 1941, and Sept. 2, 1945, the span between Pearl Harbor and Japan’s formal surrender, 75 years ago this month.

Among approximately 150,000 Legionnaires who returned to uniform in World War II were American Legion founders Theodore Roosevelt Jr., Eric Fisher Wood and Hanford MacNider, all as generals. Roosevelt Jr., at 56, was the oldest American in the first wave of the Normandy invasion; he received the Medal of Honor for his actions at Utah Beach on D-Day. MacNider, who served as American Legion national commander in 1921 and 1922, would lead troops in the miserable fight to secure New Guinea, where he was wounded by a Japanese grenade that ultimately left him blind in one eye. Fisher Wood was stationed in Europe when his son went missing and was killed during the Battle of the Bulge.

The American Legion made homefront support its primary mission. Legionnaires raised tens of millions of dollars in war loans. They wrote to the troops overseas. They collected items – from soap to cigarettes – and sent them to distant outposts. Legionnaires trained at home to become air wardens and patrolled the coasts, watchful for signs that the war might be coming to U.S. soil. They lobbied Congress to provide what they themselves did not have after World War I – career opportunities and decent health care – for the GIs coming home changed by combat.

As wartime veterans, the Legionnaires knew they could provide meaningful counsel for the new generation of military personnel, over 61 percent of whom were drafted. The organization produced a series of booklets – “Fall In,” “At Home” and “At Ease” – the first of which offered guidance 1942 American Legion National Commander Roane Waring described as “letters from a veteran father to his sons in service.” That first publication explained what the new troops might expect, what to do and not do while in uniform, military jargon to know, insignia to understand, benefits information and pay scales to expect.

On the final page of “Fall In,” the message was clear that before, during and after service, The American Legion stood with them:

You have left your home to serve your country.
Serve it to the credit of yourself, your family, your state and your country.
You are now a comrade in the fraternity of American servicemen.
The American Legion, a million and a quarter strong, and its American Legion Auxiliary of three-quarters of a million women, desire to serve you and to be your friend.
If you need advice, not obtainable through military channels, call upon the members or the service officer of the nearest Legion post, or if desired write direct to the Defense Division, National Headquarters, The American Legion, 777 North Meridian St., Indianapolis, Ind.
We will help you in your claims and in your connections with the U.S. Veterans’ Administration.
We will feed you in our homes.
We will see that where possible you get the hometown newspaper while you are away.
Our American Legion club houses and memorial homes are open for your use.
We are sending playing cards, cigarettes and musical records for use on the long transport voyage and when you get “over there.”
We are comrades now and we will serve you in every way possible while you are in service and after you come back home.

“At Home” was a follow-up booklet to help families understand how to support their loved ones at war. “At Ease” was published later to provide guidance on benefits and support in the transition to civilian life. By the end of World War II, American Legion National Headquarters had distributed more than 2.9 million of the booklets.

A national American Legion World War II Liaison Committee was formed to understand and meet the needs of the new generation. Its stated responsibility was to “educate, engage and enthuse” those newly minted veterans. The committee reported more than 21 million mailings, hundreds of radio broadcasts (including a 13-week series on the GI Bill), more than 1,000 news reels, thousands of newspaper placements, billboards, posters and more. The campaign did not simply aim to turn the new veterans into Legionnaires; it was meant to show them the respect they deserved and support available thanks to their honorable service. No one had done that for the World War I founders of The American Legion.

“With this new strength and new expansion, the responsibilities of The American Legion are growing,” National Commander Edward N. Schieberling said in late 1945.  “We are growing in power and influence. We must ever use that power and that influence for the good of our beloved country.”

The war was won, and The American Legion – reprising its mantra after World War I – wanted no more of it. “We are now entering the period so familiar in American history when we will wish to forget the war,” Schieberling said. “The reports received from the liberated and conquered countries, however, give us an idea of what we may face in the reconstruction of peacetime civilization. Those reports should convince all that the national defense of our nation is a task never ending and never to be neglected.”

Korea, Vietnam, the Cold War, Desert Storm and the global war on terrorism would prove in the decades ahead that a commitment to national security through military preparedness is a continuous mission for the United States. History proves there is no war to end all wars, no matter how big, deadly, costly, global and definitive. World War II was all of those things, prosecuted from the jungles of New Guinea to the shipyards of Portland, Ore., and American Legion posts around the world.

In 2004, then-American Legion National Commander John Brieden described the emotions of seeing Omaha Beach during the 60th anniversary of the D-Day invasion and the gratitude still expressed by French citizens who were liberated by the Allies in June 1944, at a cost of more than 60,000 casualties in the first 30 days. One veteran of the invasion, he explained, looked through tear-stained eyes at the beach and admitted, “I don’t know how I made it… or why I made it.”

Weeks earlier, the National World War II Memorial was dedicated in Washington, D.C., with substantial American Legion financial support. Some 150,000 veterans were there to see, as Brieden explained, “what many of them felt they never really needed: a monument. Veterans of World War II saw victory as reward enough – the freedom that emerged from their sacrifices, the prosperity of the 20th century, a world saved from dictatorship, imperialism, the Holocaust.”

The memorial, he explained, is for us and those yet to come “who must always know our planet once stood at the precipice of a second Dark Age, one that human civilization might have spent centuries fighting to overcome. Thank God the veterans of World War II were strong enough, brave and willing to fight to the death – with no turning back – for my freedom, for that of my children and grandchildren, and all their future generations.”

The end of their war began a new America and, with that, a new era for The American Legion.