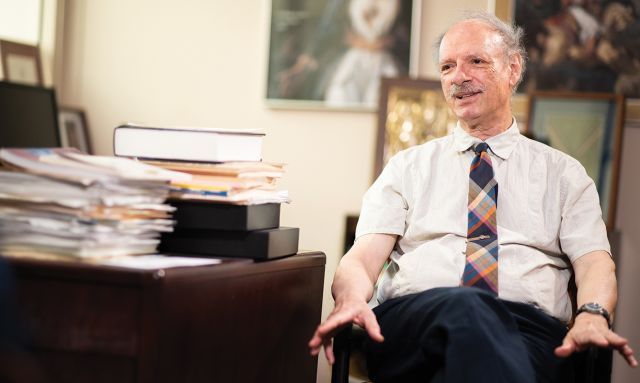 Apostolos Georgopoulos leads a University of Minnesota neuroscience research team that is exploring a potential link between the anthrax vaccine and Gulf War Illness. Photo by Lucas Carter

Some Gulf War veterans are suffering lingering consequences of the anthrax vaccine they received 30 years ago because they lack the genetic tools to deal with toxins in the inoculation, a University of Minnesota (UM) neuroscience research team says. These former servicemembers face increasingly serious health problems similar to those suffered by other veterans who have been diagnosed with Gulf War Illness (GWI).

“They lack very specific genes that would enable them to manufacture antibodies against the anthrax antigens,” says Apostolos Georgopoulos, American Legion Chair of Brain Sciences at UM, research team leader and recipient of the Legion’s 2017 Distinguished Service Medal. “These antigens (toxins) stay in the lymph nodes for decades” and continue to make veterans sick.

Other GWI experts are skeptical of UM’s findings. And the team is struggling to find funding for a more comprehensive study of the potential link between the anthrax vaccine and the disease.

The UM researchers believe there’s another cause. U.S. servicemembers were given as many as 20 vaccines to protect them from diseases ranging from cholera to yellow fever in case of biological weapons attacks during the 1991 invasion of Iraq. “If you were called up at that time, you were given every vaccine in the refrigerator, including some that were not FDA-approved,” says Brian Engdahl, a researcher at UM’s Brain Sciences Center.

The UM neuroscience research team has performed blood tests, brain scans, and mental and physical health evaluations of hundreds of Gulf War veterans over the years. Last year, the researchers decided to examine the immune system response genes of some of the sickest servicemembers in their research cohort.

The anthrax vaccine study involved 15 veterans with GWI and was funded in part by the American Legion Department of Minnesota’s Brain Sciences Chair endowment. All but one of the 15 former servicemembers deployed to the Persian Gulf conflict. Blood tests showed that all had anthrax antigens in their blood. And all lacked the genetic tools to deal with the antigens – or toxins – they received in the vaccine.

The key is a deficiency in the human leukocyte antigen (HLA) complex on chromosome 6. “That determines the lion’s share of your body’s immune system response capacity,” Engdahl says. When veterans lack certain HLA genes, they can’t produce antibodies that would make them immune to anthrax. Thirty years later, the anthrax antigens continue to circulate in their bloodstreams and continue to make the veterans sick, Georgopoulos adds. But the team believes the anthrax antigens can be removed from their blood using plasmapheresis, stopping the disease.

UM researchers say they believe some of the other vaccines the U.S. servicemembers received are also making them sick because of the same genetic deficiency. “The anthrax vaccine is probably the most toxic,” Georgopoulos says. “It’s also the vaccine veterans couldn’t have gotten from any other source. You have to be in the military.”

Brian Zimmermann, who served with the Army’s 1st Infantry Division during the Gulf War and has participated in other UM studies, is encouraged by the findings although he was not part of this project. “Knowing the people, I have absolute, 100 percent confidence in their work,” says Zimmermann, a member of Lee Goldsmith American Legion Post 201 in Mora, Minn. “Dr. Georgopoulos is relentless and he’s staying on top of it.”

Still, a comprehensive study of a larger cohort of Gulf War veterans is needed to validate the anthrax vaccine findings. That’s on hold because of a lack of research dollars. “All the funding goes to toxic exposure,” Georgopoulos says.

The UM team says it isn’t discounting the adverse health effects of neurotoxins Gulf War veterans were exposed to during the conflict. Instead, they believe their research shows the anthrax vaccine is an additional cause of GWI and helps explain why some servicemembers who didn’t deploy also suffer from the disease. “In our view, those (environmental) exposures acted as enhancers of the toxic effect that persists in anthrax and other vaccine antigens,” Georgopoulos says.

Other GWI researchers say the UM study isn’t conclusive, in part because it involved only 15 veterans. “It’s a tiny sample size,” says Roberta White, professor and former chairwoman of environmental health at the Boston University School of Public Health and former scientific director of the Research Advisory Committee on Gulf War Veterans’ Illnesses. “They don’t say how the 15 ‘Gulf War Illness participants’ were diagnosed, and there is only one control. And there’s no comparison to other predictors of Gulf War Illness, like chemical exposures.”

In addition, past research has concluded that receiving the anthrax vaccine was not a major contributor to the development of GWI, says White, who has been studying these health problems since shortly after the first veterans returned from the conflict.

“One of the hardest things to figure out is the effects of specific exposures, because it was a mixture of exposures,” she says. “Maybe anthrax could be a part of that, but I don’t think a study with 15 people establishes that.”