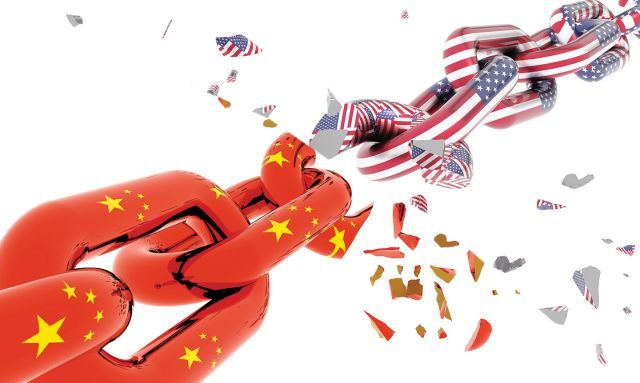 The COVID-19 pandemic has exposed a glaring threat to U.S. public health and national security: dependence on the People’s Republic of China (PRC) for critical equipment, technologies, products and medicines.

Although reliance on supply chains that originate or run through China is not a new problem, it appears policymakers are finally serious about addressing it. Just as the Soviet bloc’s attempt to seize West Berlin and South Korea awakened the United States to the burdens of the Cold War, the PRC’s criminal negligence in response to COVID-19 is altering both the trajectory of the U.S.-Chinese relationship and the supply chains that sustain America’s economy.

It doesn’t take a Clausewitz or Kissinger to recognize that these vulnerabilities could be exploited in a crisis. In fact, they already have been. American Enterprise Institute scholars Daniel Blumenthal and Nicholas Eberstadt report that China “quietly managed to buy up much of the world’s available stockpiles of such gear as N95 masks” and “procured nearly 2.5 billion pieces of anti-epidemic equipment” as COVID-19 swept the globe. President Xi Jinping’s regime hoarded and then resold the equipment at exorbitant markups – as much as 3,000 percent.

Beijing’s calculating callousness shouldn’t shock us. The PRC has always been an ends-justify-the-means regime that has disdain for international norms of behavior. The COVID-19 crisis proves that the PRC’s supply-chain dominance is a weapon Xi can and will use against the free world.

As with medical supplies, China has shown a willingness to weaponize REEs. After a 2010 dispute with Japan, China reduced global exports by 72 percent and completely stopped supplying REEs to Japan. In 2020, Beijing cut REE exports 62 percent.

This underscores why President Trump issued an executive order in 2017 directing federal agencies to develop a strategy to secure “mineral commodities ... vital to the nation’s security.”

Military equipment and technology An interagency task force warned in 2018 that China represents “a significant and growing risk to the supply of materials and technologies deemed strategic and critical to U.S. national security.”

Reuters reported in 2014 that the Pentagon “repeatedly waived laws banning Chinese-built components on U.S. weapons in order to keep the ... F-35 fighter program on track in 2012 and 2013.” Equally worrisome, a PRC firm acquired the British company tasked with producing circuit boards for the F-35, which will soon become the backbone of U.S. and allied airpower.

According to the U.S.-China Economic and Security Review Commission, China accounts for 73 percent of Microsoft’s inbound supplies, more than 60 percent of Dell’s and HP’s, and nearly
50 percent of IBM’s. These are among the federal government’s top information technology suppliers.

As evidence of the military’s reliance on Chinese firms for off-the-shelf technology, the Air Force and Army purchased thousands of items produced by Lenovo and Lexmark in 2018. Yet in 2019, the Pentagon inspector general reported that Lenovo grafts “hidden hardware or software used for cyberespionage” into its computers, and Lexmark has “connections to Chinese military, nuclear and cyberespionage programs.”

Solutions If there is a silver lining here, it’s that the COVID-19 crisis has spurred the free world into reducing dependence on China.

Perhaps the most dramatic evidence of this is Britain’s 5G reversal. After approving PRC-based Huawei for his country’s 5G buildout in January, Prime Minister Boris Johnson reversed course in July. COVID-19 changed neither the products offered by Huawei nor the nature of the PRC. Rather, what COVID-19 did – or more accurately, what Beijing’s response to COVID-19 did – was remind Britain of the true nature of Xi’s regime.

The United States, Britain and dozens of other countries are now building a “clean 5G network.” Johnson is calling on the D10 – an informal partnership of 10 democracies enfolding the Group of Seven industrialized democracies plus Australia, South Korea and India – to pool their technological resources, build on their shared values and harness their interoperability to create an uncompromised 5G network.

This effort points to a practical solution to the supply-chain challenge exposed by COVID-19. Rather than retreating into protectionism or autarky, the United States and its allies could work together to build supply-chain resilience, diversify supply chains, and ensure availability of critical materials, products and technologies.

In other words, the answer to our “Made in China” problems is not only “Made in America,” but made also in Australia, Japan, Korea, India, Europe, Latin America and Southeast Asia.

Toward that end, the United States is launching an Economic Prosperity Network (EPN)
comprised of trusted partners committed to “integrity, accountability, transparency, reciprocity, respect for rule of law, respect for property of all kinds, respect for sovereignty of nations and respect for basic human rights,” as the State Department reported in mid-2020. The EPN and related efforts aim to “restructure these supply chains to prevent something like this from ever happening again,” according to Secretary of State Mike Pompeo. The United States, Australia, Colombia, India, Japan, New Zealand, South Korea and Vietnam are exploring how to build this uncompromised supply chain.

Relatedly, Japanese and Australian officials have proposed expanding the membership and mission of the Five Eyes intelligence alliance (enfolding the United States, Britain, Australia, Canada and New Zealand) by adding Japan and cooperating on production of strategically critical materials, such as REEs and medical supplies.

Already, an Australian REE mining firm is shipping minerals to Colorado for processing by a U.S. firm. In a similar way, an international partnership built around the Five Eyes, D10 or EPN could collaborate to produce, stock and pre-position medical equipment and medicines outside the PRC. The purpose would not be to weaponize medicine, as China has done, but quite the opposite: to ensure that supplies are available when needed and to allow the market to function unhindered by malign actors.

Here at home, scores of bills are percolating in Congress related to supply chains and China.

Some would incentivize U.S. drug companies to produce more pharmaceutical ingredients in the United States. Others would use grants or tax credits to revive America’s REE supply chain, which withered in the 1990s. Still others aim to bolster America’s industrial base and refashion its technology supply chains.

There’s growing support for “reshoring” – the process by which U.S. firms would shift operations from China back to America. Already, the U.S. International Development Finance Corporation and the Pentagon are distributing $100 million to reshore “domestic industrial-based capabilities to support the national COVID-19 response.” Some policymakers want to expand on this by creating a $25 billion “reshoring fund.”

Japan is even further down the reshoring road. After weathering the human and economic costs of overreliance on China in COVID-19’s wake, Tokyo committed $2.2 billion to help Japanese companies move production out of China, and 87 have already begun moving.

Costs However, that won’t address other costs. The main reason companies move offshore is the cost of labor, which is lower in China than in America. Subsidizing firms to pull out of China won’t alter this economic reality.

Then there’s equipment. “China may not allow a company to take any of the machinery, tools and molds in its manufacturing plants to another country,” points out Ed Yardeni, a global-investment strategist.

These factors serve as a reminder that breaking China’s supply-chain dominance won’t be easy, painless or cheap. Quite unlike postwar Japan and postwar Germany, the PRC has no desire to join an international system premised on the rule of law, free markets and fair play – only to supplant it. And quite unlike the Soviet Union, which literally walled itself off from the world, China has stretched its tendrils deep into the Americas, Europe and Indo-Pacific. As Pompeo noted during a speech in Europe, “The CCP (Chinese Communist Party) is already enmeshed in our economies, in our politics, in our societies in ways the Soviet Union never was.”

Even so, there appears to be a new bipartisan interest in removing roadblocks to reshoring. Trump has signed executive orders aimed at “relocating medical supply chains back home” and “accelerating the domestic manufacturing of essential medicines.” Likewise, during his presidential campaign, former Vice President Joe Biden vowed to “use the full power of the
federal government to rebuild U.S. domestic manufacturing capacity of our supply chains for critical products.”

The market may be a step ahead of the policymakers. As Beijing hoarded medical supplies, Apple and Honeywell, Fanatics and Ford, GM and GE, MyPillow and 3M, ExxonMobil and Anheuser-Busch retooled production lines to churn out facemasks, N95 respirators, rubbing alcohol, hand sanitizers, disinfectants, face shields, ventilators and hospital gowns.

Producing 13 million facemasks a day, Taiwan also stepped up to fill the gap created by
Beijing’s attempt to parlay a health crisis into a geopolitical windfall.

By February, firms of every kind were moving supply chains away from China to develop resilience. A Bank of America survey found in March that companies operating in 83 percent of international industries – including carmakers, semiconductor manufacturers and medical suppliers – planned to move all or part of their supply chains out of China.

“These movements are tectonic,” according to Bank of America economist Ethan Harris.

Limits Even free-traders like Kudlow recognize that certain industries and products cannot be entrusted to malign actors. In fact, the father of free trade, Adam Smith, argued in “The Wealth of Nations” (1776) that “when some particular sort of industry is necessary for the defense of the country,” it’s appropriate “to lay some burden upon foreign for the encouragement of domestic industry.”

The father of our country would agree. “A free people ought not only to be armed, but disciplined,” President George Washington counseled. “Their safety and interest require that they should promote such manufactories as tend to render them independent on others for
essential, particularly for military, supplies.”

In the 21st century, as COVID-19 has taught us, supplies that are essential for defense of the country include not only munitions, but also minerals, microchips, masks and medicines. After decades of close collaboration, our Five Eyes, Group of Seven and D10 allies have proven their ability to build up those supplies – and rebuild our supply chains.