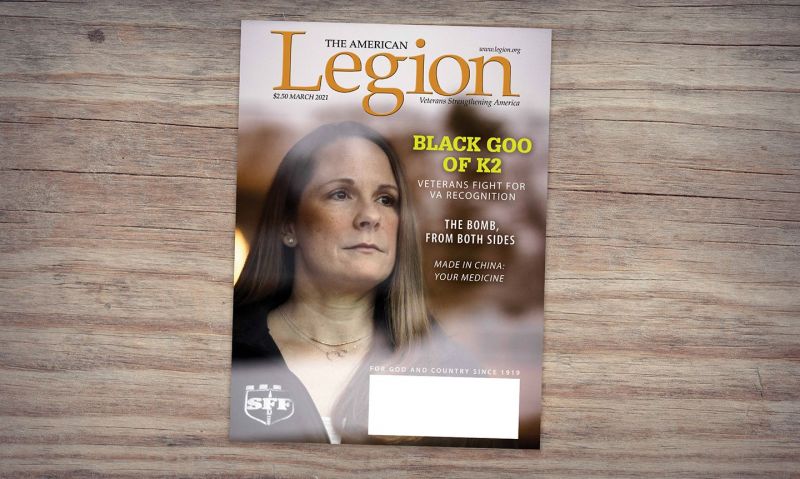 The March 2021 American Legion Magazine digital edition looks at toxic exposure at a secret Air Force base in Uzbekistan, China's role as pharmacy to the world, and what an Allied invasion of Japan would have meant to an Army soldier and a Japanese woman later united by family. The clickable digi-mag is available through MyLegion.org.

• In "The Casualties of K2," Ken Olsen tells the stories of veterans who are suffering from rare cancers and other illnesses as a result of their service at Karshi-Khanabad in Uzbekistan. "We need health screenings for all of the chemicals we were exposed to, and toxicological tissue testing for the other toxicants members were exposed to, ingested or aspirated,” says Paul Widener, executive director of the Stronghold Freedom Foundation and member of Burton-Cowell American Legion Post 265 in Jacksonville, N.C. “We need to do this for the guys who are sick and the guys who died.”

• Rosemary Gibson of the Hastings Center sounds the alarm on America's growing dependence on China for generic drugs. "In early 2020, during a peak period of hospitalizations for COVID-19, the PRC threatened through its official news outlet to withhold medicines from the United States," she writes. "If China actually carried out this threat, it would be an efficient way to destabilize a country and demoralize a population."

• In "The Invasion That Never Happened," American Legion member Ron Basso shares an interview with his Army veteran father Rudy Basso and Japanese mother-in-law Shizuko Nomoto, both of whom were prepared to fight if the United States had invaded Japan in 1945.

• National Commander James W. "Bill" Oxford explains how the second annual 100 Miles for Hope will be bigger and better, including a tracking app, opportunities for sponsorship, and more time to achieve personal fitness goals.