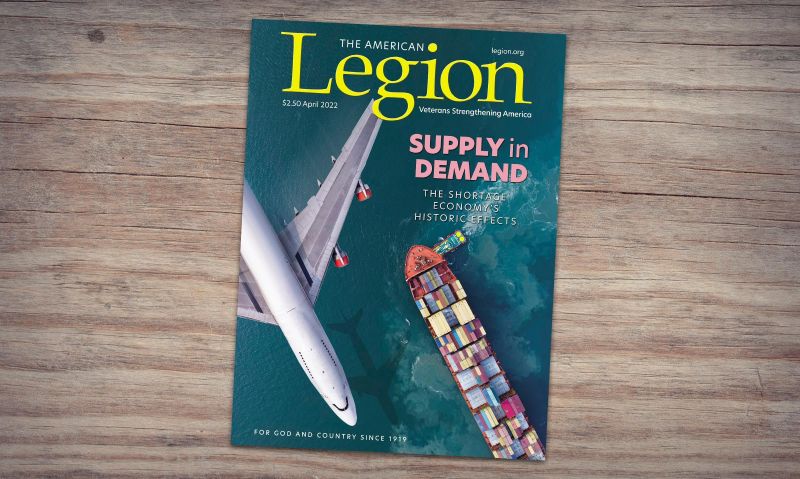 Check out the April 2022 American Legion Magazine digital edition, which includes features on the global supply chain disruption, the National Guard’s critical role in COVID-19 relief, year two of The American Legion’s alliance with Chip Ganassi Racing and more. The clickable digi-mag is available through MyLegion.org.

• In “Stress Test,” Alan Greenblatt describes how the COVID-19 pandemic has strained global supply networks. “Supply constraints, logistic chokepoints, lack of workers and widespread commodity shortages are all hitting the system at the same time, and that has made for very uncertain supply chains,” says Tom Derry, CEO of the Institute for Supply Management, an industry trade group. “We’re used to dealing with any of these issues, but it’s unprecedented that we’re dealing with all these issues at the same time.”

• As a record number of COVID-19 infections strained the U.S. health-care system in January, National Guard personnel continued to serve on the front lines of the pandemic – administering vaccines, operating testing sites, even driving school buses. “The National Guard will continue to support our communities in the fight against COVID,” says Army Maj. Gen. Jill Faris, director of the Office of the Joint Surgeon General at the National Guard Bureau, “wherever and whenever we’re needed.”

• In “Under the Cloud,” Navy veteran and Arizona Legionnaire J.B. Rivard recalls his participation in Operation Dominic, the nation’s last atmospheric nuclear test series, 60 years ago.

• Star drivers Jimmie Johnson, Tony Kanaan and Alex Palou are back in action for the 2022 NTT INDYCAR Series, promoting The American Legion and talking about the need to reduce the veteran suicide rate.

• Sons of The American Legion Squadron 294 in Hartland, Wis., stages an annual “Sleepout for Veterans,” with members of the post’s Legion Family sleeping outside in single-digit temperatures to create awareness about veterans homelessness.