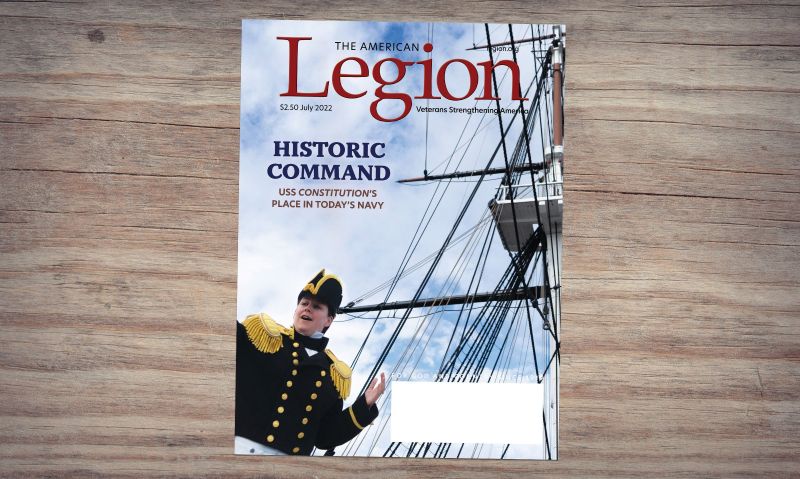 Explore the July issue of The American Legion Magazine, with feature articles on the legacy of “Old Ironsides,” the Legion’s immigration policy, the origins of “Robert’s Rules of Order” and more. The clickable digi-mag is available through MyLegion.org.

• Passed by The American Legion’s National Executive Committee on May 5, Resolution 23 clarifies and updates the organization’s policy on immigration, border control, detention and the route to naturalization and U.S. citizenship.

• An American Legion report recommends VA and the Department of Education clear up definitions, rules and outdated references for GI Bill-using veterans and military-affiliated students enrolled in online programs. “Online is the future, and the quality is there,” says Joseph Wescott, a higher education consultant for the Legion and former president of the National Association of State Approving Agencies. “We’re not going back, due to the far-reaching advancements in technology.”

• In “Hell’s Half Acre,” Keith Nightingale tells the story of young paratroopers who led a misdropped resistance force in stalling German reinforcements at Normandy. “No heavy weapons, no officers, no medics, no radios,” he writes. “This would be the ultimate light infantry battle, led by two men barely out of their teens.”

• This year’s 1,200-mile American Legion Legacy Run will depart Mobile, Ala., on Aug. 21 and travel through five states before arriving Aug. 25 at Post 434 in Oak Creek, Wis., in advance of the Legion’s 103rd National Convention in Milwaukee. Money raised benefits the American Legion Legacy Scholarship Fund, which provides college scholarships to children of U.S. military personnel killed on active duty on or after 9/11, as well as children of post-9/11 veterans with a combined VA disability rating of 50% or greater. Register for the Legacy Run or donate here.

• An emphasis on programs, activities and spaces that appeal to children is fueling growth at Jack Henry Post 1 in Alaska, Fuquay-Varina Post 116 in North Carolina and elsewhere. “As a new membership year begins, The American Legion is trending in the right direction, especially where we are welcoming young veterans and their families,” National Commander Paul E. Dillard writes.