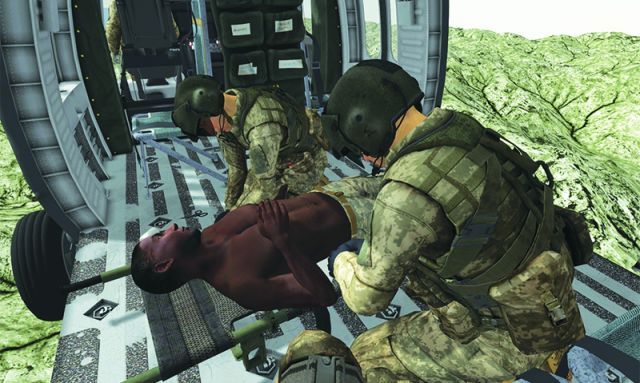 A soldier dealing with post-traumatic stress disorder relives the episode he cannot escape. While he navigates the Humvee through the darkness just outside Mosul, Jones is on his right, scanning the horizon. Hernandez and Smith are in the back, on high alert.

Suddenly, an IED goes off. The Humvee is on its side. Only the driver survives the fiery crash.

It’s not a dream. It’s virtual reality. And it’s one of the ways Emory University is using prolonged exposure therapy to treat veterans suffering from PTSD, says Barbara Rothbaum, executive director of the Emory Healthcare Veterans Program and a clinical psychologist.

“It has more evidence that it works than any other intervention for PTSD, including two FDA-approved medications,” she says. “And it’s worked across the world. The symptoms of PTSD are part of the normal response to trauma. Everybody experiences them. We think that part of how PTSD develops is because people end up avoiding thinking about it. They don’t emotionally process it right after it happens.”

When undergoing treatment with virtual reality, a veteran articulates details of the event to a trained clinician. The therapist then updates what the veteran sees in the virtual world in real time:

“Jones is sitting on my right, singing country music. Again.”

“Fifty meters away, an Iraqi man darts around the corner out of sight.”

“An IED flashes, then everything goes dark.”

In groups of 12 to 14, they begin their two-week journey at Emory. Therapists prescribe specific treatments for each individual. A therapist will meet one-on-one with a veteran for 90 minutes each day. During that time, veterans will close their eyes, return to the traumatic event and recount it out loud repeatedly. For homework, they are required to relisten to their accounts each day during the sessions. And the group meets together for two hours daily.

Rothbaum, who has been researching and working on PTSD solutions since 1986, says the concept is to have the veteran experience and process the incident, rather than try to bury it.

“Our military folks are trained not to pay attention to their emotions,” she says. “At some point you need to put it all back together and have your human response to what happened. But for a lot of reasons, they don’t. It’s painful. So we think that avoidance leads to the development of PTSD.”

Some veterans focus on the fact that nothing can change what happened. For Rothbaum, it’s about processing the incident.

“The problems people are having right now are more likely due to PTSD, depression or substance use. And that we can change. I’ve become a real believer in the resilience of the human spirit. I will hear stories, and wonder how someone could get over it. And then they do with this therapy.”