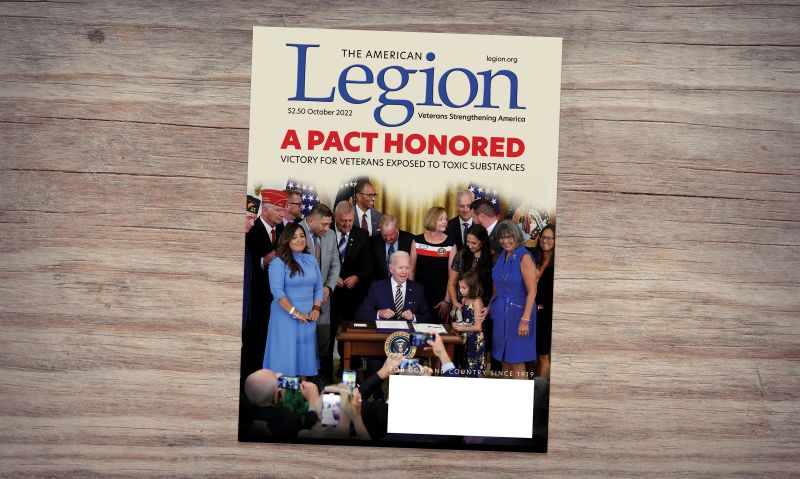 Check out the October American Legion Magazine for an in-depth look at how the PACT Act promises relief to generations of U.S. veterans exposed to toxicants, as well as features on newly elected American Legion National Commander Vincent J. “Jim” Troiola, mustang therapy for PTSD, the origin of the Legion’s “Be the One” initiative and more. The clickable digi-mag is available through MyLegion.org.

• Meet American Legion National Commander Vincent J. “Jim” Troiola, elected at the organization’s 103rd National Convention in Milwaukee. A native New Yorker and Navy veteran, Troiola believes service is the key to growing and strengthening the Legion. Showing new members around the post, making Buddy Check calls to ask how the post can help them, identifying at-risk veterans and connecting them to resources through the Be the One campaign – “the more people know what we do, the more will join the ranks,” he says.

• In “Saving George,” Henry Howard shares the story of George Kanaly, a Vietnam War veteran who found peace and healing through Operation Wild Horse, a nonprofit that pairs wild mustangs and burros with those struggling with PTSD. “There have been times I came in with a real bad attitude, and the horse mellow me out,” he says. “It’s given me new ways to address negative stuff.”

• Having lost a brother and fellow Navy SEAL to suicide, Dave Berkenfield says everyone has the opportunity to “Be the One” in The American Legion’s campaign to reduce veteran suicide – veteran, spouse, friend, civilian, caregiver. “Be the one person to recognize that a family member needs some help, or be the one friend who actually makes a phone call and asks someone how they’re doing,” he says. “You just have to be a true connection with someone who needs it. That’s what Be the One is about.”