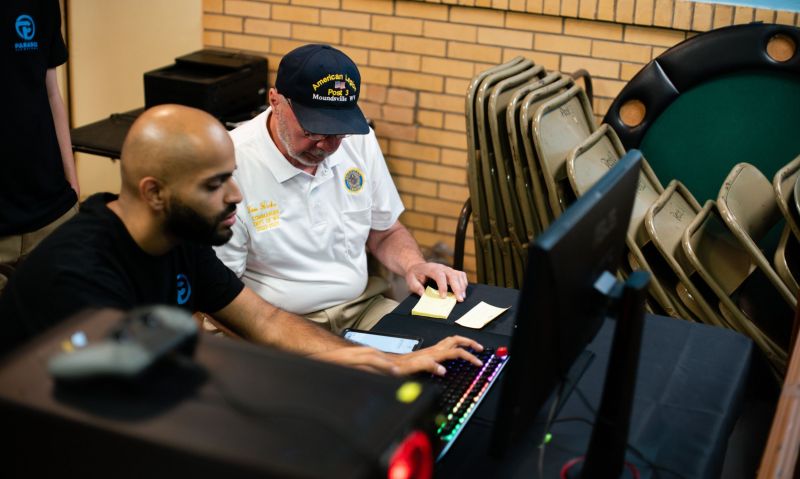 While still in the Marine Corps, Chris Earl saw his comrades struggling as they re-entered civilian life. Connected to many of them through the world of online gaming, Earl founded Regiment Gaming in 2020, to assist transitioning servicemembers and also prepare for his own transition someday.

His online video game community for veterans, active-duty military and their families is the largest of its kind in the nation, with a membership approaching 20,000.

As it has grown, Regiment’s relationship with The American Legion has also blossomed, starting with an online tournament collaboration in 2021. That was followed by Regiment manning four PC gaming stations for three days during the Legion’s national convention in Milwaukee last August. There, members of Regiment and employees of Paradox Customs – which specializes in custom computer setups and providing gaming stations –

interacted with American Legion Family members of all ages.

The convention also gave Earl and others from Regiment an opportunity to encourage Legionnaires to consider setting up similar stations in their local posts as a way to reach younger veterans through gaming. Regiment and Paradox even teamed up to give away a $3,000 gaming PC in a drawing at the national convention. The winner was Tom Hicks, commander of the American Legion Department of West Virginia and Post 3 in Moundsville.

“We’d like to have these gaming stations in posts across the country to target the younger demographic of veterans,” says Earl, a member of the Legion’s Department of California. “With all the peripherals and gaming equipment, (a four-PC setup) costs less than $10,000. It’s easy to monetize gaming and make this money back. A lot of post-9/11 veterans are definitely going to come into these posts.”

Paradox founder/owner Arpit Manaktala says his company is willing to both rent gaming PCs to posts and provide support. “If it’s a big event the post has planned, we can rent the whole four-PC setup and even be there on site for the event to help facilitate,” he says. “That’s what we’re all about. We have training and support, so we can offload most of the responsibilities of maintaining the setup, but also train the veterans themselves.”

Earl has seen firsthand the difference Regiment has made in members’ lives, both virtually and at an in-person barbecue sponsored by the Legion in Cincinnati last August. Regiment members traveled from as far away as California to meet fellow gamers in person for the first time.

“Surreal,” he says of the event. “I’ve known a good amount of these people online. Played video games with them for months. A couple of them for several years ... ‘It’s like, ‘Wow, that’s what he looks like.’ You build these relationships, and you think, ‘Oh, it’s just my gamer friend.’ But it changes when you start doing these in-person meetups.”

Among the veteran gamers at the barbecue was Adrianna “Whiskey” Bennett, 21, Regiment’s content director and a resident of Eaton, Ohio. “When I first got out of the Marine Corps (in 2021), I was so lost,” she says. “Going from having the Marine Corps be my everything to a new town I’d never been a part of, I didn’t have any friends. Regiment found me, and now it’s like I have a home and a family.”

Bennett’s description of what Regiment means to her matches that of Andrew “Oakley” Wiley, who served in the Army from 2008 to 2012 and deployed to Iraq in 2009. A professional photographer in Los Angeles, Wiley says being a part of Regiment’s community has been therapeutic for him – and probably others, too.

“I’m a veteran who didn’t have to shoot anybody or get blown up,” Wiley says. “We dealt with our fair share of crap. But I feel my deployment was super light. And even just the effects that a deployment like that have on someone’s mindset is nutty. For what this does for me ... it hits me in my heart and in my head every day that I get to spend with these guys on Discord (a free communications app that lets users share voice, video and text chat with friends, game communities and developers) and at events.

“So when it comes to someone who has seen a lot more (during deployment), I couldn’t even put a value on what this does for mental health. You can talk to anybody here, and they’re knowledgeable about what it takes to survive.”

Yackley, who attended the Regiment barbecue, says gaming strengthens the bond he shares with other veterans, as well as giving him a way to deal with the after-effects of his service. “When you’re a part of the military, whether you realize it or not, you are part of a brotherhood,” he says. “You go through things (together) that most people will never even imagine ... events like this, where you can put a face (with) the game tag, it’s such a fantastic thing.

“There are a lot of people who have been through so much. Regiment’s extremely important to me. I found them, luckily, in a very dark time in my life. Yeah, I may have been physically sitting at a computer, but I’m talking to 15 different people. It’s amazing to be able to do that and build those relationships.”

Hearing what Regiment has done for fellow veterans has convinced Earl that this is his calling. “The reason I did this full time – I dropped out of college and quit my job – is the first time someone messaged me and said Regiment saved their life:

‘I was going to kill myself last night, but I didn’t because Regiment was there for me, and the community members were there for me,’” Earl recalls. “I never thought as a 24-year-old kid I’d be able to do something this impactful and save people and change people’s lives.”

Events such as the Regiment barbecue and its presence at the Legion’s national convention have given Earl’s gaming community an opportunity to get its name out there. He wants to strengthen that relationship with the nation’s largest veterans service organization.

“The American Legion is obviously a household name among not just veterans, but communities,” he says. “Just to have them watching our six, helping us out with things like this, it brings huge validity to what we do. We look forward to hosting more events with them.”

Steve B. Brooks is social media manager for The American Legion.