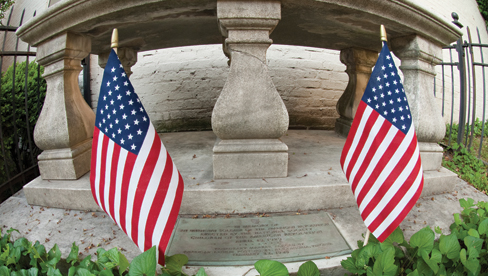 The Tomb of the Unknown Soldier of the American Revolution in Alexandria, Va., is hard to locate even if you know where to look. It rests in a tiny, hidden cemetery where it is tucked in a corner, backed against a wall. The marble tomb is lost in the shadows of nearby trees and can’t compete with the giant memorials, statues and monuments throughout the Washington area.An inscription, similar to that found on the Tomb of the Unknowns at Arlington, reads, “Here lies a soldier of the Revolution whose identity is known but to God.” The tabletop epitaph has faded with time: “His was an idealism that recognized a Supreme Being, that planted religious liberty on our shores, that overthrew despotism, that established a people’s government, that wrote a Constitution setting metes and bounds of delegated authority, that fixed a standard of value upon men above gold and lifted high the torch of civil liberty along the pathway of mankind. In ourselves this soul exists as part of ours, his memory’s mansion.”I am saddened that I linger here for an hour or more, paying respect to the generation that gave birth to the country I love, and see no one approach.The Old Presbyterian Meeting House, which lovingly cares for the unknown soldier’s churchyard cemetery, reports that a meager five or six people a day pick up the pamphlet explaining what it is. Just a few minutes away, 11,000 people a day enter Arlington National Cemetery to view the Tomb of the Unknowns, listen to “Taps” and witness the guards take their perfectly measured steps.“It’s a shame more people don’t come to see it,” says Richard Azzaro, a former guard at the more famous Arlington tomb and an advocate for the anonymous one in Alexandria. “It was the soldiers who secured the freedom Americans sought, not arguments or pleas for justice. They put everything at risk, and we’re the heirs of the people represented here.”This particular unknown-soldier’s grave was discovered in 1826 when workmen excavating a construction project broke through a munitions box containing the remains of a man in his Revolutionary War uniform. He was promptly re-buried. In 1929, a national campaign, led by John Gordon of American Legion Post 24, succeeded in erecting a permanent tribute.“These thousands who will follow you here to stand in homage before that tomb will leave this quiet little Virginia churchyard better Americans,” Gordon said at the Lexington-Concord Day dedication. “They will have a clearer vision of their duties as Americans.”Over time, however, the unknown revolutionary’s tomb fell into obscurity. It is not included in Alexandria’s official walking-tour guide handed out at the city’s visitor center. Washington tourism materials don’t give it much regard, and the tomb is mentioned only briefly, if at all, in any guidebooks written about the area.“The country hasn’t fully embraced the Revolutionary War,” says historian Donald Dahmann, a member of the Old Presbyterian Meeting House. “I think this is another indication of how we as a society have overlooked those who fought for our independence.”Azzaro, a Revolutionary War re-enactor, has been trying to change that. For more than 20 years, he and his re-created unit, the First Virginia Regiment of the Continental Line, have led wreath-laying ceremonies at the tomb during Alexandria’s annual Presidents Day parades. The number of observers, he says, increases every year. Christopher Lancette is a freelance writer who lives in the Washington area.