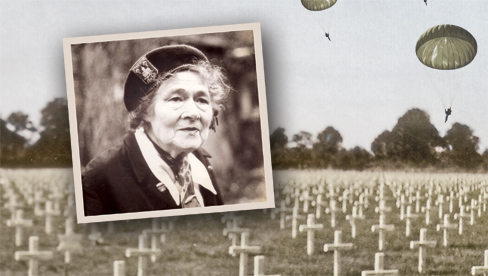 Simone Renaud watched in horror as misdropped U.S. paratroopers descended into a deadly firefight in the town square of Ste. Mère-Église, France, in the early-morning hours of June 6, 1944. Before the eyes of her three children, German forces turned their machine guns on 82nd Airborne Division soldiers who gave their lives to begin the Allied invasion that would liberate Europe 11 months later.

Renaud, the wife of the World War II mayor of Ste. Mère-Église, would never forget that sacrifice. In the weeks following D-Day, she took it upon herself to care for the graves of some 15,000 U.S. troops who were buried in three temporary cemeteries in and around the town.

When a photo of her decorating one of those graves - that of Gen. Theodore Roosevelt Jr., a founder of The American Legion - appeared in Life magazine, she was besieged with mail from U.S. families. They wanted to know if Renaud would care for their sons' graves, too. They wanted to know if she could take pictures of their battlefield resting places.

Thus began a 44-year relationship between the French mother and thousands of U.S. families. She spent the rest of her life writing letters, shooting photos, organizing ceremonies and corresponding with those who'd lost loved ones at Normandy. She worked eight to 10 hours a day on a mission that would last until her death in 1988.

Her story is told in a documentary film, "Mother of Normandy," produced by Doug Stebleton of Iron Mike Entertainment and co-written by Jeff Stoffer, editor of The American Legion Magazine. Accepted and screened at the 2010 GI Film Festival in Washington, the film features French star Leslie Caron as the voice of Simone Renaud.

As a companion to the film, a new book titled "Mother of Normandy: The Story of Simone Renaud," written by Stoffer and designed by American Legion Magazine Art Director Holly Soria, has been published and is available for purchase through Emblem Sales, Amazon.com or by visiting www.motherofnormandy.com on the Web.

Proceeds from book sales are applied to The American Legion's Overseas Graves Decoration Trust Fund. The fund provides U.S. flags, free of charge, to place at the gravesites of U.S. war dead buried in foreign lands, under the American Battle Monuments Commission's administration.

"Simone Renaud spent her life after World War II closing the distance between the United States and France, specifically making sure the people of Normandy never forgot the price in blood paid by Allied forces to reclaim Europe from Hitler," Stoffer said. "One year after Operation Overlord, she arranged a parade and ceremony to commemorate the first anniversary of the invasion. That grew and grew over the years until now Normandy is an international illustration of the power of good over evil, with massive anniversary celebrations the first week of every June. That is Simone Renaud's legacy. And she really made this happen by writing intimate, heartfelt letters, one family at a time, for more than four decades."

The Story of Simone Renaud

"Mother of Normandy: The Story of Simone Renaud," can be ordered through American Legion Emblem Sales at www.emblem.legion.org or at www.motherofnormandy.com. Orders can also be placed by phone at (310) 497-8000. Hardcover copies are $35 each, softcover $25. DVDs are $20 each. Sales help benefit The American Legion's Overseas Graves Decoration Trust Fund.