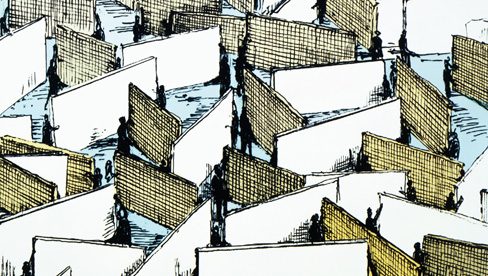 Ron Conley approached VA representatives about an employment fair scheduled in Pittsburgh in November and asked if they would be taking applications for VA jobs at the event. The answer was a perplexing “no.”

“They told me that would be an injustice to veterans because they don’t have their completed applications with them,” says Conley, a past national commander of The American Legion and manager of the Allegheny County, Pa., Veterans Affairs Office. “They want to sit there and preach how good veterans are for employers, but they don’t want to take applications from veterans.”

This sort of hurdle is common for returning servicemembers, who find great frustration in their searches for government jobs despite a veterans-preference hiring law dating to the mid-1940s, a slew of “hire vets” slogans, and promises from politicians and agency chiefs. A government hiring guide acknowledges the complexity of a federal job search, then blames the problem on fairness rules. The Obama administration has even convened a task force to try to revamp the process.

Meanwhile, more than 21 percent of veterans ages 18 to 24 were unemployed in 2009, outpacing the civilian jobless rate. The official statistics likely underestimate the problem, because a large number of returning servicemembers don’t file for unemployment but stay with family or friends and live off their savings while they search for work.

“I think it’s far worse than folks see,” says Operation Iraqi Freedom veteran Tim Embree, a Legionnaire and a legislative associate with Iraq and Afghanistan Veterans of America (IAVA). “And I think with this wave of veterans coming home from Iraq – and potentially from a drawdown in Afghanistan – the problem is going to be worse than anyone can imagine.”

Urban Myth. Veterans are surprised at how difficult it is to land a job once they leave the military. Tom Tarantino and his fellow soldiers talked optimistically about the opportunities that awaited them once they finished their tour with the 11th Armored Cavalry Regiment in Iraq in 2005 and 2006. That vaporized when Tarantino left the Army a year later.

“It’s an urban myth that if you have been in the military, it’s really easy to get a job,” says Tarantino, also a Legionnaire and a senior legislative associate for IAVA. “I spent a very painful 10 months looking for work. Usually, I would get to the offer stage, and they would go with someone who had no military experience but had a master’s degree, or had been in the company a long time.”

He realized he was in trouble when a prospective employer, who was looking for a small-factory manager, cautioned him that he would have to oversee 30 people. Tarantino commanded 50 soldiers in combat as a platoon leader and 400 soldiers as acting company commander.

“At first I thought it was funny,” Tarantino says. “Then I realized I was in trouble. I had been sitting there talking to the guy for 20 minutes – going over my résumé, explaining what I had done. It was like teaching French to a guy from Mars.”

The federal government, on the other hand, is compelled by law to offer veterans an easier path to post-military employment. The government has more than 400 occupational specialties, the most of any U.S. employer. And VA is one of the largest veteran employers.

“Veterans prefer to stay with the government,” says Joe Sharpe, director of The American Legion’s Economic Division. “The jobs are often similar to what they had in the military. The benefits are good, the work is stable, and they feel that is a better fit for their family.” After nine years of fighting two wars and serving numerous combat deployments, military families need such stability, Sharpe says.

Returning servicemembers, however, are discouraged by a byzantine federal-application process, and never reach the interview stage. One of the most formidable hurdles, they say, is the website USAJobs.gov, the mandatory entry point for seeking federal work. The job descriptions posted there are voluminous. A maintenance mechanic’s job at the Pentagon fills six pages. The computerized application itself is long and complex. Veterans also have to fill out other forms and supply additional documentation to claim a veterans-preference status that they suspect is overlooked or ignored.

“It’s needless and bureaucratic,” Tarantino says. “You had to have eight hours to spend filling out an application. And you knew you wouldn’t get a call back.”

Barry Searle, a retired Army colonel and infantry combat veteran with a master’s degree and a decade of experience as a pharmaceutical sales and marketing director, applied for more than 70 positions through USAJobs.gov between 2007 and 2009. He couldn’t even land an interview for front-desk security guard at an Army maintenance facility, says Searle, director of the Legion’s National Security & Foreign Relations Division.

It’s a jarring welcome home for Iraq and Afghanistan veterans, who have a higher unemployment rate than any other veteran group. “A lot of these men and women come back and see this process and think it’s insane,” says Embree, who served with the Marines in Iraq. “And they are right.”

Once Burned. The federal hiring gauntlet is equally depressing for veterans who left the service before 9/11. Allen Dinning was medically discharged from the Air Force because of a knee problem in 1986. The disabled veteran became a respiratory therapist 14 years ago, after trying his hand at other careers.

“My dream job would be to work at VA with my fellow veterans,” Dinning says. He applied at a Pennsylvania VA hospital four years ago. Although Dinning had a decade of experience, VA passed him over but hired four co-workers from the hospital where he worked. None had served in the military. A VA human-resources recruiter told him there is no veterans preference for health-care workers, he says.

Now 47 and unemployed, Dinning has applied for six different VA positions, including clerical jobs, “just to get my foot in the door. I’m at the point where I’m going to apply for housekeeping.”

Kent Weaver left the Navy in 1995 after a 10-year career, to spend more time with his only child. He put on a suit and tie and visited the state employment office in Columbia, S.C., expecting to get help with his résumé and leads on good jobs. Instead, the employment representative told him he didn’t qualify for any veterans programs, handed him a business card for the West Columbia Police Department and told him to go be a cop. He received a similar brush off from the local VA.

“Being in the Navy didn’t mean anything,” Weaver says. “I was so mad I threw the card away and swore I would never go into a government office looking for help again.”

Weaver delivered windshields for $7 an hour, then worked as a corrections officer, a landscaper and a beverage-truck driver. He shattered his elbow working in a lumberyard four years ago and has been unemployed since. Weaver and his wife moved home to Pennsylvania, where he ventured back into a state employment office in desperation. The veterans representative he’s dealing with now is going out of his way to help, Weaver says. It’s help he could have used 15 years ago.

“I could have gone to work for the federal government when I got out if I hadn’t been lied to by the South Carolina Job Service representative that day,” Weaver says.

Iraq and Afghanistan veterans are running into similar obstacles with USAJobs. “It’s like, ‘I’m over here fighting for you and you send me to a website that’s going to take me forever to figure out?’” Weaver says.

The online application process is only part of the problem. There’s confusion as to whether applicants have to include “Key Skills Assessments” – a written summary of their knowledge, skills and abilities. Weaver, who recently used USAJobs to apply for a job, received a tip from VA that he needed to include that information. “But there was nothing on USAJobs that told me I had to do that.”

It also takes six to eight months for the federal government to hire someone after it receives an application. By that time, “most veterans have taken another job,” Sharpe says.

Veterans who have had mental-health counseling are deterred by security clearance requirements for federal positions in the Department of Defense, says Rachel Natelson, a volunteer legal adviser with the Service Women’s Action Network (SWAN).

“A lot of women are so afraid of the consequences of having counseling they don’t seek counseling or they don’t bother applying for federal jobs,” Natelson says. “And this doesn’t apply exclusively to women veterans.”

SWAN supports efforts to persuade DoD to stop requiring veterans to disclose counseling for sexual assault or sexual harassment. Meanwhile, women veterans there are floundering in the job market because VA counseling and treatment that would help them re-integrate is often difficult to obtain or geared for male veterans, Natelson says.

“Unemployment among veterans hasn’t been tied to the economic downturn alone. It’s tied to larger social issues, things like benefits and counseling,” Natelson says. “This will be a bigger and bigger problem as more and more veterans come back.”

All the hurdles don’t make for a better federal work force. A study released in August by the Partnership for Public Service and a private human-resources consulting company found that the federal government is doing a poor job of evaluating job applicants. The study singled out factors such as flawed computer systems that stymie a federal agency’s ability to evaluate applicants. Other factors included poor coordination among hiring managers, human resource offices, agency chiefs and the Office of Personnel Management (OPM).

Wired to Serve. The unemployment issue has captured the attention of Adm. Mike Mullen, chairman of the Joint Chiefs of Staff. “We’ve got over a million who are returning from these wars and whose American dream hasn’t changed a bit,” Mullen said in a speech to the Executive Club in Chicago in August. “They are flat-out wired to contribute, flat-out wired to serve.”

The consequences of not dealing with the needs of returning servicemembers, he added, are already appearing. “We are generating homeless at a rate about four times greater than we did in Vietnam.”

There are signs the federal government is addressing the problem. Last year, President Obama directed his agency chiefs to do a better job of hiring qualified veterans, and many have responded with initiatives to remove some of the hurdles.

Assistant Labor Secretary Ray Jefferson is drawing praise for his efforts to revamp the federal hiring process. OPM, meanwhile, persuaded seven federal agencies to reserve 600 jobs for qualified veteran applicants in advance of a job and hiring fair at The American Legion’s 92nd National Convention in Milwaukee earlier this year.

Job descriptions were distributed to veterans across the country through the Department of Labor, state employment agencies and veterans service organizations such as the Legion two weeks prior to the convention, to give veterans time to apply.

“We’ve greatly expanded our reach beyond what you would consider traditional veterans hiring,” Arata says. As a result, 22 percent of new applicants for Border Protection jobs are veterans. And 31 percent of new hires in fiscal 2010 are  veterans.

OPM also sent a trainer to the Legion’s convention workshops to help veterans submit polished applications for federal jobs, and has a task force working to improve USAJobs.gov. Sharpe credits the Obama administration and John Barry, director of OPM, for starting to make these strides.

“They are making good on their promise,” Sharpe says. “I’ve never seen anything like it.”

There’s far more than jobs at stake, Embree adds. “We’re at a crossroads,” he says. “If you get veterans back into the economy, you are going to solve a lot of the problems you are going to see down the road, such as homelessness and suicides. The time for talk is over. This administration and this Congress need to step up and show today’s veterans they have their back.”