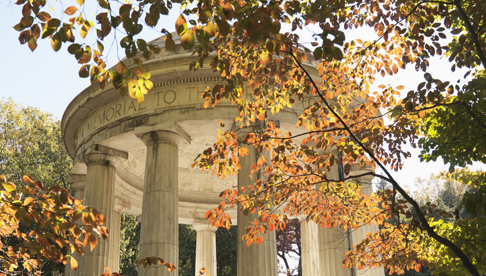 Frank Buckles nearly tumbled out of his wheelchair as he made his way along the crumbling stone walkway leading to the District of Columbia War Memorial on the National Mall in Washington. Algae had turned green the once-white dome of the memorial. Invasive plants had overtaken the open grove around it.

Buckles was one of a few who ever visited it. Little existed in the way of signs pointing tourists to the site, built by residents of the nation’s capital in 1931 to honor the nearly 500 people from the district who lost their lives in World War I.

The last surviving U.S. veteran of the Great War, Buckles turned to a friend advocating for funding to restore the memorial and said, “Let’s do it.”

If the West Virginia resident, who turns 110 years old this month, made it back to the site today, he’d see that the memorial makeover is well under way. Last August, the National Park Service began a $2.28 million restoration project – including new signs – scheduled to be completed in about a year (the American Recovery and Reinvestment Act provided the funding). Buckles no longer does media interviews, but his daughter, Susannah Flanagan, knows exactly how he would react.

“He would say, ‘It’s about time! I’m glad they did something before it fell apart,’” Flanagan says. “Everyone but him has passed away, and he appreciates what the memorial stands for – not for his sake, but for theirs.”

More good news may be on the way for Buckles and his daughter: a consensus bill introduced in the 111th Congress would have provided greater recognition for the D.C. War Memorial, while also enhancing the status of the Liberty Memorial and its museum in Kansas City, Mo. The compromise among a range of supporters of each site, both seeking national stature, would have designated both as “national” memorials. The D.C. War Memorial would have become the District of Columbia and National World War I Memorial, and the Kansas City destinations would have been known as the National World War I Memorial and Museum.

“The millions of Americans who served their country bravely in World War I deserve to be recognized for their sacrifice,” says co-sponsor Sen. Claire McCaskill, D-Mo. “The proposed compromise, with bipartisan support from all sides of the issue, would provide World War I veterans with a fitting tribute – both in Kansas City with a national memorial and museum at the Liberty Memorial, which has long stood with the grandeur and stature of a memorial that honors all World War I vets, and also by expanding the meaning of the District of Columbia World War I memorial on the Mall to give it a national scope befitting of its location in our nation’s capital and acknowledging the fact that all World War I vets should be honored alongside veterans of our other great wars.” McCaskill and her co-sponsors “remain committed” to getting the bill passed in the 112th Congress.

The American Legion’s National Executive Committee passed a resolution in October endorsing legislation that unites several different bills relating to the memorials in each city.

“This is a good compromise,” says Jack Querfeld, the Legion’s director of Internal Affairs. “We believe the increased recognition will mean that more people visiting the Mall in Washington will see the D.C. memorial, and that a lot of people will travel to the heartland in Missouri to see the memorial and monument there.”

The bill would have also established a commission of 24 members to ensure a proper observance of the World War I centennial in 2014. The president, the Senate, the House, The American Legion, Veterans of Foreign Wars and the Liberty Memorial Association could each appoint members to the body.

The key to passing any good piece of legislation, though, always rests with developing a strong coalition – something that past Department of the District of Columbia Commander Thomas Kouyeas called for in a 2008 story in The American Legion Magazine. Attorney Edwin Fountain was one of many people who sought to add muscle to the effort, helping to form the World War I Memorial Foundation. It advocates for D.C. War Memorial restoration funding and greater recognition for the site, and endorses the compromise.

“It’s unconventional to have two national memorials, but there’s no reason why this can’t be done,” says Fountain, who currently serves on the foundation’s board of directors. “These memorials are very important. A lot of people don’t realize that more Americans died in World War I than in Korea and Vietnam combined, but those wars have a greater place in our national consciousness. You can’t understand those wars or really understand the history of the 20th century without understanding World War I.”

President Calvin Coolidge had even higher hopes for such recognition when he dedicated the Liberty Memorial on Armistice Day in 1926.

“It has not been raised to commemorate war and victory, but rather the results of war and victory, which are embodied in peace and liberty,” he said in a speech that mentioned his being on hand five years earlier when the Legion’s convention participated in groundbreaking ceremonies. “In its impressive symbolism, it pictures the story of that one increasing purpose declared by the poet to mark all the forces of the past which finally converge in the spirit of America in order that our country as ‘the heir of all the ages, in the foremost files of time,’ may forever hold aloft the glowing hope of progress and peace to all humanity.”

The prospect for peace is also very much on Susannah Flanagan’s mind as she reflects on what memorials to her father’s war mean to her.

“These memorials are places where people walk around and learn history,” she says. “As people are remembering these things and remembering the fallen, I would hope we learn to avoid repeating the mistakes that lead to wars.”

Christopher Lancette is a Washington-area freelance writer who often writes about U.S. history. Read more at his blog site, dcreflections.typepad.com.

Keep track of the latest developments on the D.C. War Memorial at the World War I Memorial Foundation: