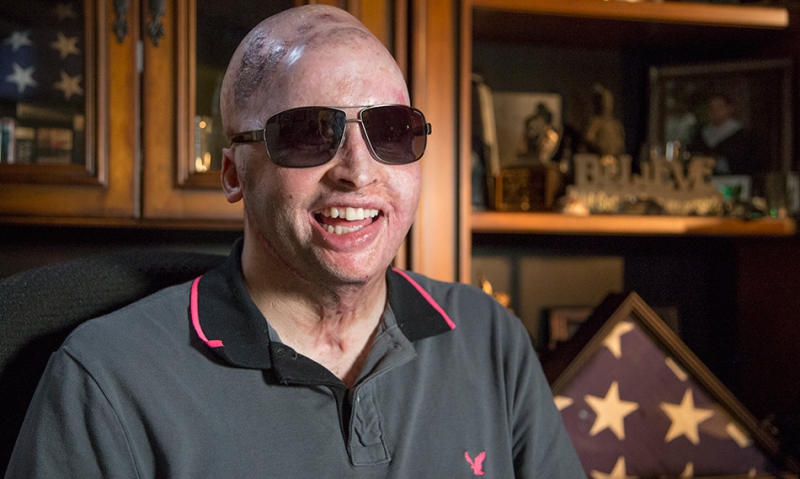 In spite of his hardships, Joel Tavera, a retired Army staff sergeant, says he feels blessed and has The American Legion to thank. Photo by Tracy Trost

The American Legion has launched a new national awareness campaign on television to raise funds that will allow the nation’s largest veterans service organization to assist more veterans and their families. The two spots feature Army veterans who have received continued support from The American Legion.

Joel Tavera, a retired Army staff sergeant, survived a rocket attack while on deployment to Iraq that destroyed his right leg, caused brain trauma, burned more than 60 percent of his body and left him blind. In spite of these hardships, he says he feels blessed and has The American Legion to thank. “The American Legion gives veterans like me a place to belong,” Tavera said. “They help us veterans in all aspects of life: medical, financial and even emotional.”

Andrew Larocca’s story is one that touches the entire family. A combat medic in the Army, Andrew lost the ability to speak as a result of a traumatic brain injury that also left him paralyzed. His brother Cody Truman and father Dave Truman share Andrew’s story as well as their own experience with The American Legion. “I’ll never forget the day that The American Legion stepped in,” Cody said. “I saw this big weight lifted off both my parents’ shoulders.”

Andrew’s father continues, “The American Legion has stepped up to the plate to ensure not only my son but other veterans get what they’re entitled.”

These two veterans lend their names and experiences in hopes of creating more awareness and generating support so The American Legion can continue providing aid to veterans and their families in times of need.

For nearly 100 years, The American Legion has been on the forefront of veteran support in America, from authoring the GI Bill to creating thousands of jobs and getting veterans the lifesaving care they need and deserve. Donations help veterans get the benefits, medical attention and jobs they deserve, through free-of-charge American Legion services.

To see the ads and to learn more, visit www.SupportLegion.org online.