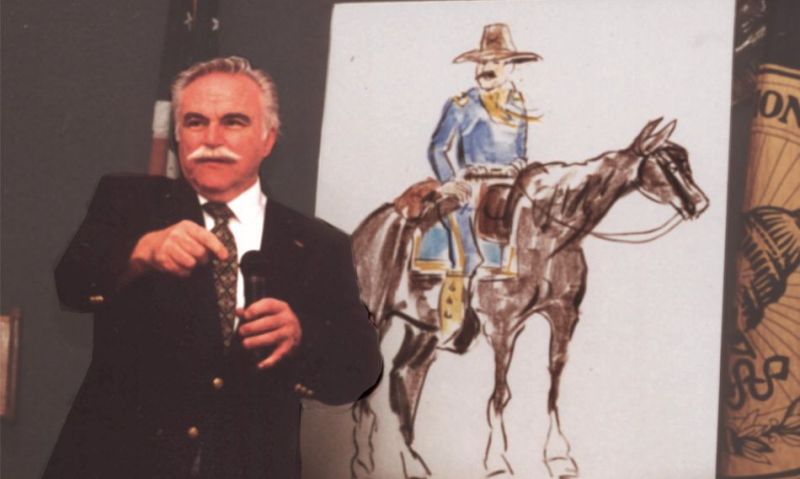 Readers of the “Flashbacks” comic strip in their Sunday newspaper – which brings history to life in multi-paneled cartoons – may be interested to know that the artist is a 50-plus-year Pennsylvania Legionnaire.

Patrick Reynolds is a life member of William P. Duffy American Legion Post 544 in Minersville. He graduated from the prestigious Pratt Institute in Brooklyn, went to work as an art director, then enlisted in the Army during the Vietnam War as an intelligence officer. He is a retired lieutenant colonel of the Army Reserve.

Growing up, he was inspired by comic books and the historical comics found in Boy Scout and Boys’ Life publications. He once used an original comic as a résumé for a state tourism job – but didn’t get it. He is still in possession of rejection letters from Atlas Comics, later Marvel, and creator Stan Lee. Later, as a teacher, he created comic-strip stories on history and current events for his young classes, which led down the road to the several ongoing projects that can be seen on his website, redrosestudio.com. In addition to “Flashbacks,” there are comics on New York, Pennsylvania and Texas history, portraits, caricatures and more. The purpose of the comics, according to Reynolds, is to “tell someone something in their backyard that they didn’t know about.”

He is a fan of the “Lore of the Legion” cartoon series that can be read in The American Legion Magazine, as he is of the rise in popularity – and respectability – of graphic novels. The last few years have brought a “rise in seeing them as literature,” he comments, and he is “delighted they’re coming to the forefront and getting the attention they deserve.” Of his membership in the Legion, Reynolds says that “I find it’s a tremendous voice to accomplish things in Washington … it’s nice to know that as a member I’m part of that.”