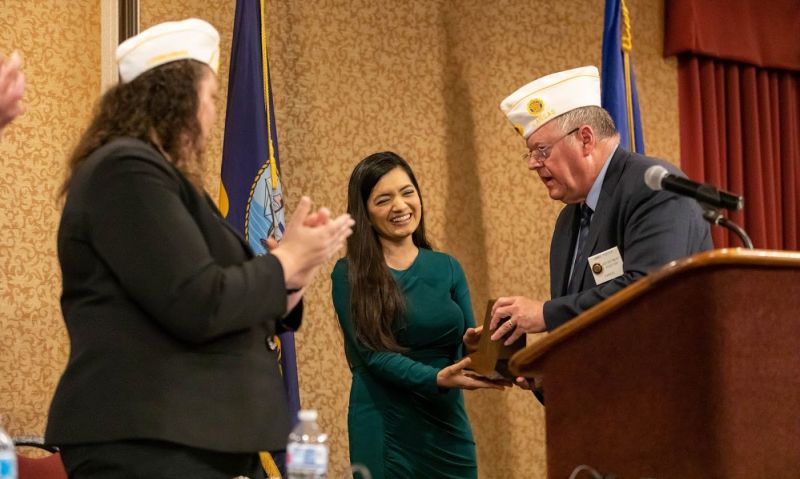 A Wichita, Kan., ABC-television affiliate and its investigative reporter were belatedly presented the 2020 American Legion Fourth Estate Award for broadcasting at the Department of Kansas convention in Topeka on Saturday.  KAKE-TV reporter Annette Lawless was supposed to receive the honor during the 2020 national convention, but the presentation was postponed when the convention was cancelled due to COVID-19.

Past National Jimmie Foster presented the award to Lawless for her series “Missing in Kansas,” which explored missing persons cases in the Sunflower State.

“Reporter Annette Lawless tenaciously digged into cold cases and attempted to find the whereabouts of more than 400 people who have gone missing over the years,” Foster said at the presentation. “Keep in mind, this work is from 2019 so the series has undoubtedly helped many more since. The series has received plenty of accolades from families, police agencies and public safety advocates. And now you can add The American Legion to that list. Annette Lawless has also provided many tips on how to keep our children safe, and educated the public about the tactics used by many predators.”

Lawless, who once worked in Cleveland, said the well-publicized kidnapping and long-term confinement of Amanda Berry, Gina de Jesus and Michelle Knight in Ohio inspired her to take on such cases in her reporting.

“The story really got me thinking,” Lawless said. “Do we really know our neighbors? Our community? What really happens behind closed doors?  Is it fair to judge people whom we don’t know? ‘Missing in Kansas’ puts that judgment aside. All I want to do is make sure that they’re ok. That’s it. The most simple bottom line.”

Lawless thanked The American Legion for the award and pointed out that on any given day more than 500 Kansans are considered missing. “The cases range from abductions to runaways to Silver Alerts.  No matter the reason behind them, there is no judgment when it comes to ‘Missing in Kansas.’ My goal is to find them and bring them home.”

The 2020 Fourth Estate Award for print journalism was presented to McClatchy News last month in Washington. The Milwaukee Journal Sentinel will be honored for online journalism at The American Legion Wisconsin Department Convention in July.