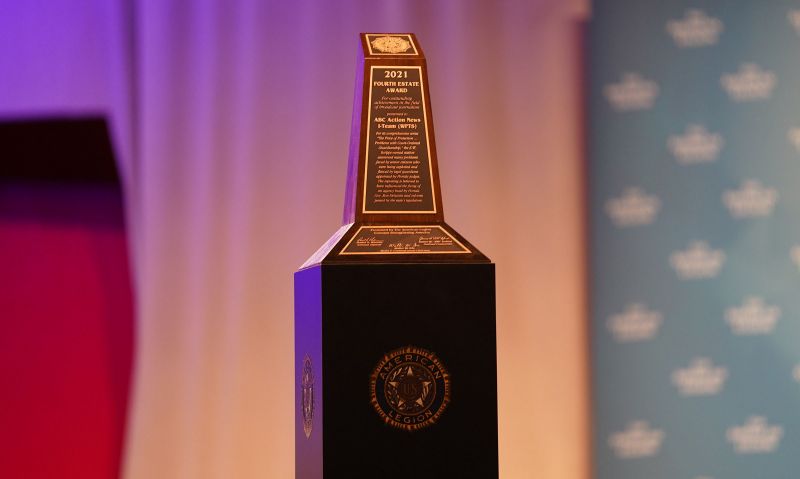 A Honolulu television station, a historic news service and a metropolitan newspaper will receive American Legion Fourth Estate Awards during the 103rd National Convention of the nation’s largest veterans organization in Milwaukee on Sept.1.

The Fourth Estate Award has been presented annually by The American Legion since 1958 for outstanding achievement in the field of journalism. Nominations in 2022 were considered in three categories: broadcast, print and online media. They were selected by the organization’s Media & Communications Commission earlier this month and announced today.

Taking top honor in the broadcast category is KHON-2 for its nine-part series “The Forgotten.” Producer Pamela Young, who received a Fourth Estate Award while with KITV in 2013, highlighted the significant contributions that Asian-American veterans made toward victory in World War II. The series culminated with hundreds of veterans and their surviving families receiving Congressional Gold Medals at a Washington gala last year.

In an online series titled “AWOL weapons,” Associated Press reporters Kristin M. Hall, James LaPorta and Justin Pritchard investigated firearms and explosives that have gone missing from military inventories since 2010. Gen. Mark Milley, chairman of the Joint Chiefs of Staff, called the AP investigation “another example of the free press shining a light on the important subjects we need to get right.”

The Milwaukee Journal Sentinel, winner of three previous Fourth Estate Awards, is being recognized in the print category for its human-interest piece, “Military Suicides Take Toll on Wisconsin National Guard.” Journalists Katelyn Ferral and Natalie Brophy chronicled the cases of four Wisconsin veterans who took their lives just months after they served in Afghanistan together.

“As a veterans organization that reveres the constitution, The American Legion has always respected the important role of a free press,” said Paul E. Dillard, national commander of The American Legion. “These award winners are being recognized for outstanding works of journalism that not only stand far above normal media reporting but have had a positive impact on society.

“I will be honored to present each of these deserving recipients with our highest recognition of journalistic accomplishment, The American Legion Fourth Estate Award, at our national convention this summer. They are all credits to their profession.”