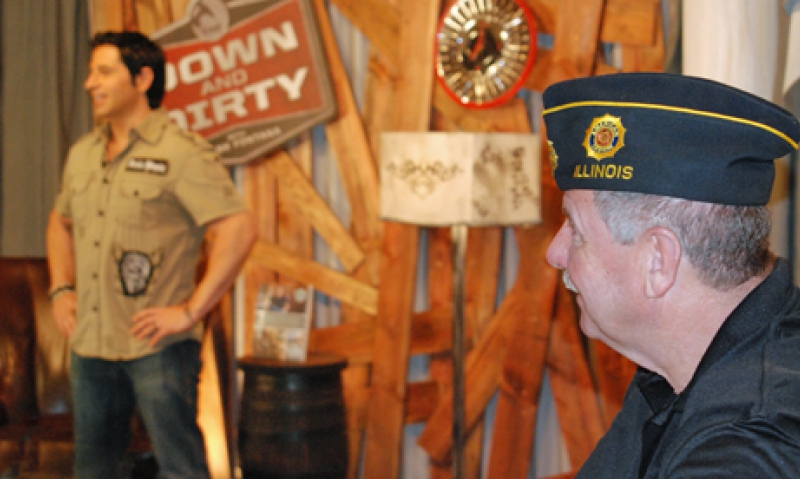 Frank Fontana, host of the fix-it-up show "Down & Dirty," probably thought he was simply providing American Legion Post 938 in Chicago with some improved lighting and other refurbishments. But according to Post Commander Clemente "Sarge" Rodriquez, workers from the show "provided a heart beat" to the cherished memorial wall of the Franklin Delano Roosevelt Post.

The online show, produced by the Craftsman Do-It-Yourself Network, premiered the episode on June 30 and remains available for viewing on YouTube.

"We're giving back to those who everyday give to us," Fontana explained to the live studio audience. Repairs and maintenance can be a challenge for the 118-member FDR Post, which includes 94 World War II veterans.

After touring the Legion post, Fontana and his crew were struck by the poor lighting and old furnishings in the meeting room of the post. While it was clear that the wall photographs of the 65 past post commanders were highly revered, illuminated by a string of Christmas lights, didn't seem to reflect that reverence.

"If these pictures on the wall could talk they would say two things: ‘don't forget me and keep us here,'" Rodriquez said.

Fontana promised to "bring some sizzle to this wall." By the time the show was webcast, the Down & Dirty crew had installed track lighting, added three-dimensional American flag wall art, rearranged the photographs, re-framed the engraved plaques and resurfaced the podium.

"Frank did an outstanding job," Department of Illinois Commander Richard Goharing said at the unveiling. "He did an enormous boost for these guys."

Past National Commander Marty Conatser of Illinois was a guest during the studio production. He emphasized the need for The American Legion and the FDR Post to continue serving. "With the FDR Post you saw the history of how they served their community and served each other," Conatser said. "Now, what we're trying to do is reach out to all veterans. There's never been a time when it's more important for veterans to stand together as veterans than right now. Our returning soldiers and their families need us more than ever, and that's what the Legion is all about. It's service: service to your community and service to your nation."

Rodriquez, who has served as commander of Post 938 since 2005, was clearly moved by the handiwork provided by Down & Dirty. "Thanks, thanks, thanks," he said to Fontana.

"Having a facility like FDR and keeping it viable is very important so that they have a place to come back to ..." Conatser said. "The understanding that is shared is invaluable."