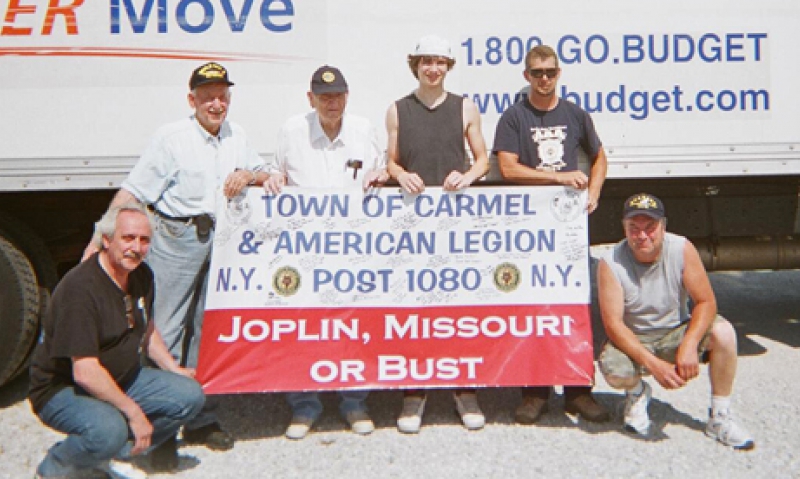 Across the nation, veterans are frequently asked to recite the 114-word Preamble to The American Legion Constitution. While each phrase is important, few in the 92-year-old document capture the essence of what it means to be a Legionnaire more than the last 12 words - "To consecrate and sanctify our comradeship by our devotion to mutual helpfulness."

And no better example can be found to illustrate what those words mean than the connection made between Legionnaires in Joplin, Mo., and Mahopac, N.Y., following a natural disaster in June.

After a devastating tornado ripped through Joplin, Commander Howard Spiva and his fellow Post 13 Legionnaires, Auxiliary members, Sons of The American Legion and Legion Riders searched for ways to help their comrades. Little did they know that their plight was noted 1,300 miles away, by Commander Joseph Toleno and the Legion family of Mahopac Post 1080.

Post 1080 Adjutant Ted Martine contacted the Department of Missouri to get Post 13's contact information. After a telephone call to Spiva, members of the Mahopac post decided to do what they could to assist.

"We contacted city officials, the Chamber of Commerce, churches, civic leaders, as well as local and area residents," Toleno said. "The positive response was unbelievable. The response was beyond our wildest dreams. Commander Spiva told us what the greatest needs were in his community, and we focused on gathering the needed items."

In the end, Post 1080 collected enough necessities to fill a 24-foot truck. And on June 24, four men - Jerry Purdy, Wes Mackey, Bob Cauley and Toleno - hopped into the truck and a chase vehicle, and drove southwest to Joplin. The cargo and the New York Legionnaires arrived two days later.

"I was shocked when the New York guys pulled into our parking lot," Spiva said. "I was even more shocked when they opened the back of the truck and I looked in. It was more than I ever dreamed it would be."

Spiva said the truck was filled with quality items, such as clothing for men, women and children, blankets, sheets, toiletries and cash. Joplin Legionnaires spent the next week organizing donations into separate boxes so that they could quickly provide specific items according to need.

"Our first goal was to provide help to Legionnaires who lost their homes or belongings in the storm," Spiva said. "We then turned our attention to military families and veterans. We also provided assistance to members of the Joplin Association for the Blind."

Asked why they drove more than 1,000 miles to help Post 13, Toleno said, "It's who we are. It's what we do. A Legionnaire is a Legionnaire. It's not only the right thing to do - it's our sworn duty to come to the aid of Legionnaires and veterans in need. It's that simple."

Spiva is thankful. "What Post 1080 members did to help us here in Joplin is an example of what we all should strive to do," he said. "They saw that we were in trouble, and they answered the call - without being asked or without a second thought. God bless them. It makes me proud to be a member of the Legion."