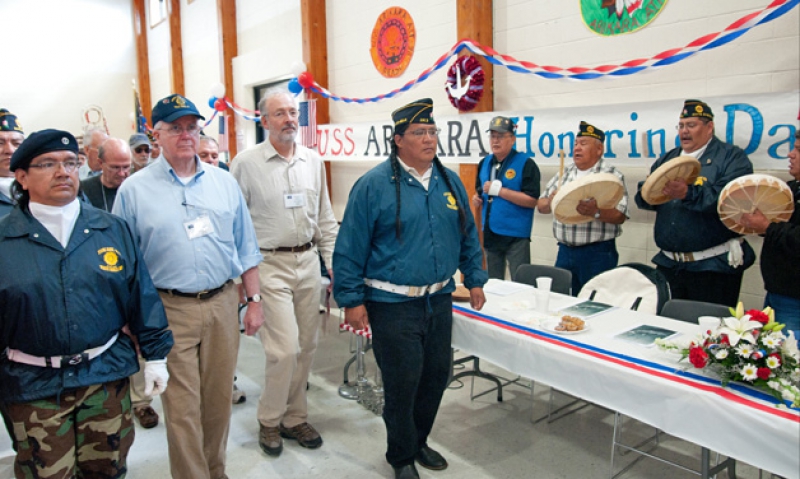 U.S. Navy veterans who were aboard the USS Arikara are escorted by members of the Joseph Young Hawk-Elmer Bear American Legion Post 253 during a program at the Ralph Wells Memorial Complex in White Shield, N.D. (Photo by Kevin Cederstrom)

A connection between crewmembers on a small United States Navy ship and a Native American tribe in North Dakota is now forever tied. On June 20, eight Vietnam War Navy veterans who served aboard the USS Arikara were in White Shield, N.D., on the Fort Berthold Indian Reservation for a reunion, as well as to meet members of the tribe for which the ship was named.

The USS Arikara, which was decommissioned on July 1, 1971, was a Navy ocean-going tug that earned a total of 11 battle stars while serving in three wars: World War II, Korea and Vietnam. After the ship was decommissioned, it was transferred to Chile as Sargento Aledea (ATF 63) where it was subsequently sunk as a target after 21 years in the Chilean navy.

Steve Ussery, of Wilmington, N. C., served on the USS Arikara and organized the reunion. He researched the Arikara and visited Fort Berthold in 2009, where he visited with the Three Affiliated Tribes council members to start planning the reunion. The ceremony in White Shield was one of many activities held on the reservation.

The ship’s executive officer, Pete Ward of Moorestown, N.J., said he and his shipmates were honored to be invited to Fort Berthold and to hold the reunion with the Arikara people.

"This is one of the greatest days of my life," Ward said. "To be able to be a part of this, it is fantastic. To be with the crew, this is a wonderful group of men."

Ward, along with veterans from the Joseph Young Hawk-Elmer Bear American Legion Post 253 in Roseglen, N.D., and visited 10 White Shield area cemeteries where veterans are buried.

Alfred Morsette, Jr., a member of the Post 253, was honored to help bring the Navy veterans to North Dakota.

"They wanted to see if the Arikara (crewmembers) still existed," Morsette said. "They thought there were very few left, but they come to find out that the tribe still exists here in White Shield. We are very honored to have them here and really wanted to meet the guys."

Tim Schulte of Brownstown, Mich., was an electrician’s mate fireman on the USS Arikara from 1969-70 and was impressed with the welcome the group received and extremely happy he attended the reunion.

"This is absolutely mind-boggling. This is so wonderful," Schulte said. "These people are so warm. It’s amazing to me. I had no idea they were so patriotic and so warm and so giving. Wonderful people. I’m so glad I made it."

During its time in war, the ship gathered intelligence and participated in salvage missions. Schulte recounted an incident in Vietnam where a Russian ship was too close to a U.S. carrier group. The USS Arikara’s job was to keep the Russians away from the carriers.

"We’re in a war zone in Vietnam and here we have the Russians shadowing our ships. It was very strange," Schulte said.

The veterans spent time around Fort Berthold, participating in activities in New Town and attending a ceremony in White Shield that honored the crewmembers. Crewmembers received a number of gifts from the Arikara people, including hats and jackets that represented the ship. Additionally, crewmembers presented an artifact from the ship to Chief Robert Bear — a ceremonial sword.

The crewmembers continued their praise of the Arikara people. Schulte and others spoke of how difficult it was at times upon their return from Vietnam as anti-war sentiment was high and many did not welcome the veterans back.

"Some of us had to take off our uniforms at the airport and put them back on when we got home," Schulte said. "But these people here welcomed us with open arms."

Mike Lee, of Helena, Mont., worked in supply while on the Arikara from 1969-70. More than 40 years later, he thanked the Arikara people for making him feel that he was "finally home." Like Schulte, he too recalled the encounter with the Russians who were trying to interfere with flight operations. "Interference with Ivan was a big deal," he said.

Following the program, the veterans went to the Indian Scout Cemetary Post #1, which was established in 1876 following the Battle of the Little Bighorn also known as Custer’s Last Stand. Three Arikara scouts —Bloody Knife, Bob Tailed Bull and Little Brave —were killed during the battle.