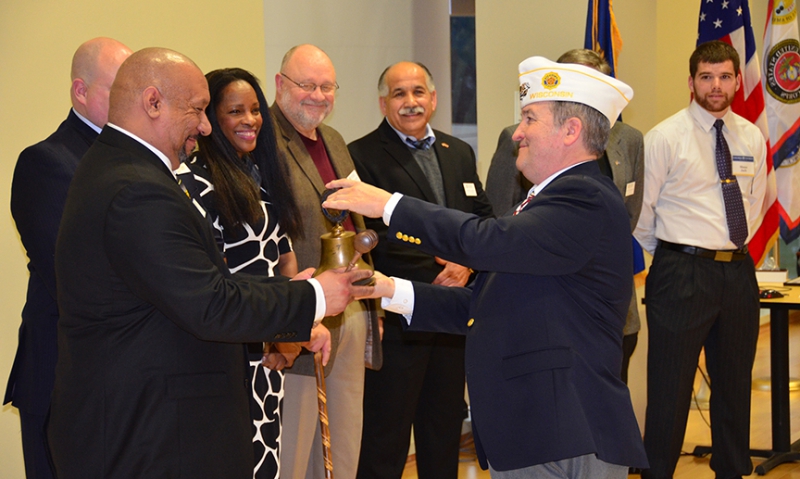 Post 1881 Commander Eduardo Garza Jr. is presented with a bell for meetings by Department of Wisconsin Commander Bob Shappell. (Photo by Steve B. Brooks)

Department of Wisconsin Commander Bob Shappell doesn’t like losing Legion members – especially when they leave his home post, Peter Wollner Post 288 in Cedarburg. But when it came to Eduardo Garza Jr. leaving Post 288, Shappell was rather understanding.

Garza, a U.S. Navy Reserve veteran and former intelligence officer in Iraq, left Post 288 so he could become commander of the newly chartered Post 1881 on the campus of Concordia University in Mequon, Wis. Comprised of students, staff and alumni from the university and located in Wisconsin’s Second District, the post had its organizational meeting in mid-March and followed up with an April 1 ceremony celebrating the formation of the post while presenting it with its temporary charter.

“The bad news is Ed transferred from my post to go to (Post 1881),” Shappell joked while attending the April 1 ceremony. “The good news is he’s the stabilizing force, and he is the guy trying to recruit veterans for Concordia. So it’s a perfect match.”

Garza is the director of Veterans Services at Concordia, which is an affiliate of the 10-member Concordia University System operated by the Lutheran Church–Missouri Synod. The college offers undergraduate, graduate, adult accelerated and online programs.

“There was a need because we didn’t have a veteran organization on campus,” Garza said. “We wanted to do something that was significant, that shows people we care about our veterans and their families … and help them with their academics.

“When the folks are leaving active-duty service, one of the first places they're going is college. And we have to be ready for them. There’s a lot of things out there that say schools are military friendly. We want to make sure that we are. Establishing a post lets the community know that we’re serious about taking care of our veterans and serving whatever their needs may be.”

Shappell said a conversation with Garza led to the formation of the post. Garza said Concordia President Rev. Dr. Patrick T. Ferry had come to Garza about forming a veterans organization on campus.

“I said, ‘Why don’t we form a Legion post,’” Shappell said. “Within three weeks we had a go from the president, we had a go from their board of regents. By the end of January we were a go. We started out with 22 new members here. We’re now up to (36 members).

“In some ways it was fairly easy. But we stayed right with it. We had the right people. And I can’t say enough about the support we’ve had … from the university.”

Ferry said teaming up with the Legion was a natural fit.

“We are eager to be very veteran friendly and support our veterans,” said Ferry, whose father – World War II veteran Eugene “Lefty” Ferry was made an honorary member of Post 1881. “It means things like providing good academic programs, good opportunities for our returning veterans. But as we thought about it further, this seemed like maybe another way of connecting, providing service, providing access (and) providing opportunities for veterans.

“(The Legion) is obviously an organization that enjoys a great reputation. It does great work with our veterans. It intrigued us.”

Recruiting members into the post, Garza said, was the result of “a lot of word of mouth. A lot of personal contact. Phone calls. Emails. Letting them know where we’re hoping to go with this and why we’re doing it. It gained a lot of support because there’s a lot of leadership out there. People want to capitalize on coming together like they used to do in the military, and coming together for a common goal and working for that purpose.”

Chris Olson, a senior majoring in business management, was elected Post 1881’s first vice commander. “I initially didn’t have a lot of knowledge about what The American Legion was,” said Olson, a U.S. Navy and Air National Guard veteran. “I’m still learning. I didn’t realize how many people they help, how many veterans they help, or why it even existed.”

Olson said there’s a need for some kind of support network for veterans attending college. “You get to college and you don’t know who to talk to,” he said. “Who do you go talk to about getting your GI Bill set up? Having an American Legion post here and having someone to actually talk to when you get out of the military is huge.”

Wisconsin Second District Commander Daniel Seehafer, who served as the Legion’s national chaplain from 2010-2011, said having the post on campus will immediately raise awareness of what the Legion does. And as a graduate of Concordia, Seehafer said he’s proud that his former school is showing it does care about its veteran population.

“We have tons of veterans here,” he said. “I know we have hundreds of opportunities (for) new members here. And it’s also going to trickle into other universities because Concordia system goes into Chicago, goes into California. There are like six, seven Concordia (universities).

During the April 1 ceremony, Shappell talked briefly about the Legion’s mission. “It’s never about us as individuals,” he said. “It’s about us as an organization doing the right thing and living up to our values. It’s about The American Legion and what we do for veterans, military members and their families.”

Ferry also spoke at the event. “It’s my great hope that by having an American Legion post on our campus, we not only pay tribute to those veterans who are my colleagues, co-workers and others from community – including our students,” he said, “but that the rest of the student population would grow in its appreciation for all that you have done to enable us to do all that we’re able to do.”

Michael Trepanier, deputy secretary of the Wisconsin Department of Veterans Affairs, also was on hand to present Post 1881 with a plaque while praising the Legion for “always being there” for veterans.

Denise Rohan, chairman of the Legion’s National Veterans Employment & Education Division, drove more than 90 minutes to watch the post receive its temporary charter. “We try to emphasize getting younger members, and to have a presence on a university campus is really a good fit,” she said. “And this district is a perfect fit. They are such a close-knit family. Of all the campuses to put a Legion post on, I think this is a good fit. They will get paid attention to. And if they need any assistance, the county will be there (and) the district will be there.”

That’s already been the case. Garza said Post 288 already has donated flags, a desk set and a podium to Post 1881, and also made a financial contribution to help get the post up and running. Working together like that is what will make Post 1881 - and its surrounding Legion posts - thrive, Garza said.

“Partnering with our fellow posts here in Ozaukee County not only makes us stronger as an organization, but it makes our community – and now our university – in which we live in stronger as well,” he said. “There are no challenges that we cannot overcome with teamwork.”