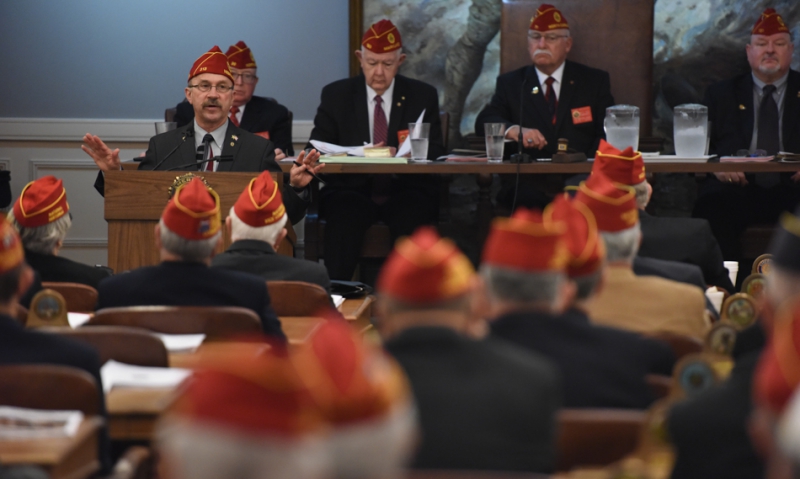 Per a resolution passed May 6 during Day 1 of the National Executive Committee's Spring Meetings, Legion posts and departments are being called upon to embrace and collaborate with Post-9/11 generation-centric veterans groups, such as Team Rubicon, The Mission Continues and Team Red, White & Blue.

Resolution 20, introduced by the Legion's 100th Anniversary Observance Committee, encourages posts and departments to build and maintain mutually beneficial relationships with the local branches of these Post-9/11 veterans organizations.

"(These) are three effective and innovative Post-9/11 veterans groups that share values similar to those of The American Legion and can play an important part in defining a second-century vision for the organization," Resolution 20 reads.

Past such collaborations between Legionnaires and members of these groups have provided crucial assistance to communities in need. In 2013, Legionnaires and posts in Colorado collaborated with Team Rubicon members to provide relief to flood victims who were displaced as a result of mass flooding that damaged more than 16,000 households in Colorado. Legionnaires and Team Rubicon also worked together to provide disaster aid to the Northeastern Seaboard in the wake of Superstorm Sandy in 2012 and for tornado victims in Oklahoma in 2013.

Legionnaires are encouraged to reach out to Team Red, White & Blue and participate in, or help host, the physical and social activities and volunteer opportunities that Team RW&B coordinates in communities. Team RW&B is organized by individual "chapters" - like Legion posts - throughout the country. These chapters host events such as 5k runs and endurance challenges. Legion posts and departments should offer to collaborate with local chapters and provide a presence at these events, the resolution states.

Legionnaires should also consider participating in community service projects coordinated by The Mission Continues, which seeks to help veterans reintegrate into civilian life through placing them in "platoons" that volunteer and provide community outreach. The platoons welcome participation from veterans of all ages and eras. Legionnaires are encouraged to locate a platoon in there area and'serve' with it.

"The Mission Continues and The American Legion have mutually beneficial opportunities to help veterans through the readjustment process while at the same time fulfilling community service needs, which are core values of both organizations," Resolution 20 reads.

Helm disappointed with VA, still optimistic for agency's future. In his opening remarks, National Commander Michael Helm expressed disappointment with the Department of Veterans Affairs, but gave strong support for its existence as an agency and its mission of providing exclusive health care to veterans.

"I've been to a lot of VA facilities and veterans homes, and they are all mostly really good, but we still have problems at some of them," Helm said.

These problems are evidenced, Helm said, by the current necessity of VA's Choice Card program, which allows veterans to seek private medical care at VA's expense, in some circumstances. Helm said he is supportive of the Choice Card program as a solution to what he hopes is a temporary problem, but that the program should not be construed as evidence that the VA system should be done away with entirely to leave veterans health care to private providers.

"The Choice Card is there to provide timely care for veterans because VA failed in that regard," Helm said. "We support the program as long as veterans need access to that care. However, we believe in the long-term existence of the Department of Veterans Affairs."

Helm also expressed disappointment over VA's decision that only one veterans service organization would have a seat on the advisory board of the newly formed MyVA initiative, which aims to realign the department into five different regions. This VSO seat would be filled on a revolving basis by a representative from each of the major veterans organizations.

"All the major VSOs need a seat at that table," Helm said.

In summation, Helm likened the Legion's relationship with the VA to a parent-like relationship - the Legion needs to be motherly in helping it provide care to veterans, but it also needs to fatherly in reprimanding VA when necessary.