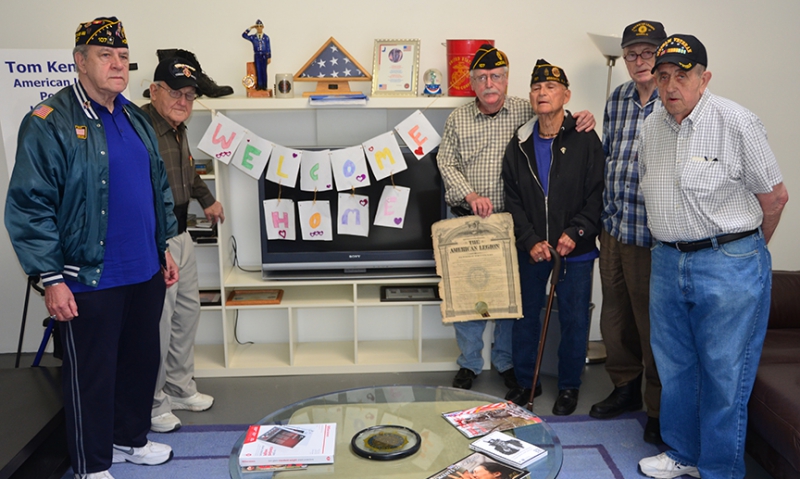 The city of Hoboken, N.J., is just over 2 square miles in size; just over 60 percent is above water. But within that area reside more than 50,000 residents – and a rich history of men and women serving their country.

For decades, those who came home from those wars used American Legion Post 107 as a place to spend time with their fellow veterans. Today, Post 107 – located in a large former garage along Second Street – is the last veterans service organization in the city. It sends out care packages to servicemembers stationed overseas and helps area veterans with developing Department of Veterans Affairs benefits claims.

But in 2012, the post took a major hit that left its home’s future in doubt. When Superstorm Sandy hit, it left part of Post 107 under more than six feet of water. Walls were damaged, files lost and memorabilia destroyed. Remarkably, the post’s original charter from 1921 was found floating in water and was able to be saved.

“Everything was destroyed,” said post member Charlie Schultz."We lost a lot of photos of the old-timers,” added 60-year Legionnaire Vince Wassman, a World War II and Korean War veteran. “We can’t replace them.”

The post’s insurance wouldn’t cover the cost of repairs. Grants from the National Emergency Fund helped solve some initial issues, but more money was needed to reopen the post.

Renovating the post was a slow process, but that was understandable to Post Commander John Carey. “There were a lot more people in this town that had a lot more problems than we did, to be honest,” he said. “So we kind of took a back seat to a lot of the major problems. This town was killed. If I wasn’t here, I wouldn’t have believed it.

“(Then Department Commander) Gene O’Grady and Michael Wilson, who's now our department commander, were very good in getting us some national money and helping us get the word out. The real problem we had was trying to raise money. We got some money from different posts throughout the country, and that all helped."

But more was needed. And that’s when the community stepped up. Led by the Hoboken Rotary Club, fundraisers were conducted to repair the post. Furniture was donated, and volunteers helped put up new drywall and paint the inside. And in January of this year, the post reopened – complete with a community party and a “welcome home” sign waiting for 107’s members.

“Their mission was not to forget the veterans, honestly,” Carey said of the Rotary Club. “You could cry (because) of what some of them did for us. They saved the day, honestly.”

Post 107’s members were shocked by what they saw when they returned to their home. “We were just aghast about how well it was put back together,” said Roy Huelbig, a 40-year Legionnaire and Purple Heart recipient. "It (had been) just a mess.”

Helping out Post 107 was an easy call for the Rotary Club. “The Rotary’s motto is service above self,” club president Joe Mindak said. “We are here as a service to our community, and a big part of our community is our veterans. The American Legion was destroyed in Sandy, and the vets had no place to hold their meetings for two years. We simply wanted to give them their home back after all the sacrifices they made for us to be able to call this country our home.”

The post had been meeting at the Hoboken Knights of Columbus building since the storm hit. Having its own home back means something to the veterans in the community – even if the post still isn’t 100 percent.

“It’s a place to come in the morning, have your coffee, hang out and shoot the breeze with other veterans,” Carey said. “(But) we’re still not there. We’ve got to redo our bathroom. We’ve got to redo our kitchen. We don’t have a bar. Our source of income is mainly from (hall) rentals, and we haven’t done that in over two years. Hopefully by this summer we’ll be up and running completely.”