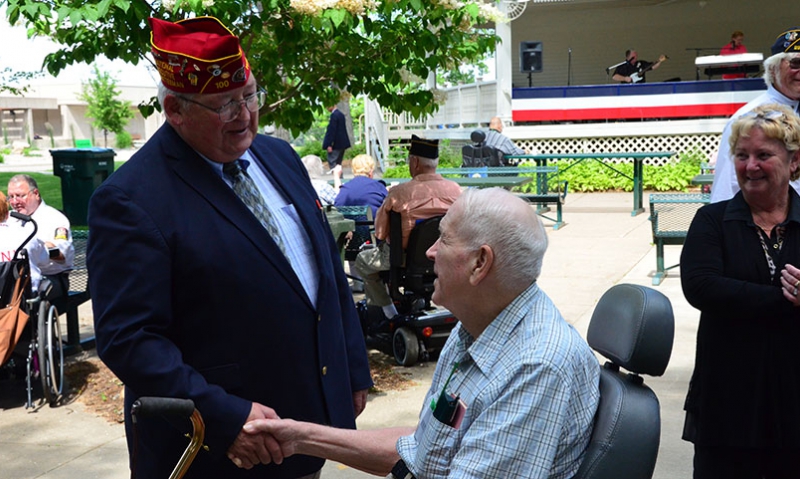 Members of the Legion Family in King, Wisc., hosted the 60th annual King Day at the Wisconsin Veterans Home.

The phrase “veterans serving veterans” took on an even more literal meaning June 21 at the Wisconsin Veterans Home (WVH) in King, Wisc. Dozens of Legion family members from across the state showed up for the 60th annual King Day.

With support from the department, Wisconsin’s Eighth District annually hosts the event. This year, that included a charcoal-broiled chicken dinner served up to the home’s residents by Post 161’s Legion family in King, a parade, music, raffles and a ceremony that included state Legionnaires and National Commander Michael D. Helm.

“It’s quite an event – especially giving the parade and the dinner to the vets,” Eighth District Commander Jerry Crofta said. “(The residents) really appreciate it. It makes it a good day to give them a break from their regular activities and give them a little change of pace.”

Department Commander Bob Shappell said that WVH is “a really special place to us. There are people that come to King Day, and that’s the big thing for them each year. It’s just a really, really unique day.”

Post 161 works with WVH to get the food for the meal. And it takes a lot of food. “I don’t know the poundage of the others, but I know I bought 750 halves of chickens,” said Unit 161 vice president Bernie Schmitt, who also serves as King Day chairman. “I’m expecting a big crowd.”

Schmitt said King Day is something her post looks forward to every year. “ “It’s great to have Father’s Day with all the veterans,” she said. “Their families come to see their fathers that are (living) here. It’s just a great day.”

Following lunch was the annual parade – led off this year by Wisconsin Legion Riders who had just completed their “Spirit of Wisconsin Ride” – and consisting of Helm, district and department officers, a 40 et 8 Voiture Locomotive and the Marathon High School Marching Band.

The department has used King Day as an opportunity to pass out new membership cards, including those members who are residents at the facility. But more than that, it’s a chance to sit down and talk with WVH’s residents and thank them for their service.

Army veteran Pat Bludeman, who has lived at WVH for four years, enjoyed the chance to meet with Legion family members. “It means a lot,” he said. “It’s nice to be able come out and have a meal out in the fresh air, and just (have) the camaraderie with everyone.”

Amber Nikolai, public relations director for WVH, echoed Bludeman’s sentiments. “It just makes (the residents) have that sense of camaraderie they had when they were in the military,” she said. “This is something that no (civilian) organization could replace. It’s only something that a veteran organization such as The American Legion … could do. It’s a spirit that they bring (here) that makes us magical.”

One of the reasons that King Day is so special, Shappell said, is that there is a sense of ownership for the facility. Close to 200 Legion family members volunteer at WVH. And those volunteers make a huge difference in the lives of the residents.

“We’re a state-ran facility, so we only get so many budget dollars,” Nikolai said. “I think that so far this year, The American Legion has donated in excess of 16,000 hours. That contributes above and beyond anything that the state can do. Events like this … all of the extracurricular activities, it’s because of organizations such as The American Legion that we’re able to do that.”